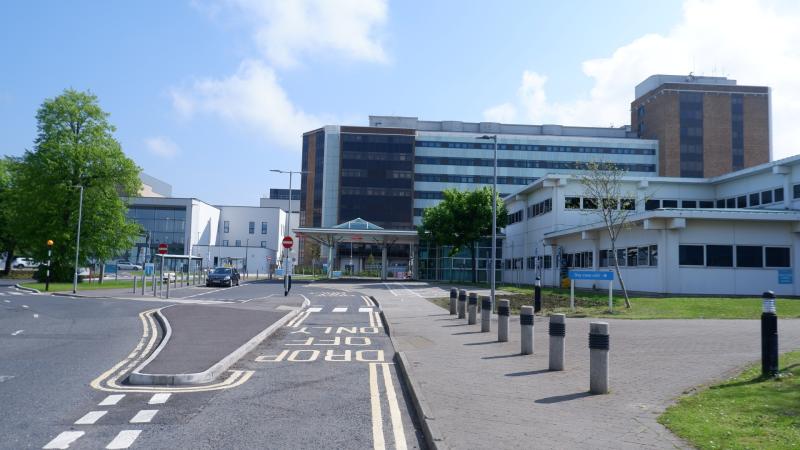 A Waterside woman claims she had to wait nine hours in casualty at Altnagelvin Hospital with a broken back.

Rhonda McKean, 61, had a bout of painful sciatica that made it difficult to walk. Using a rollator frame, she took a fall and was told by her Doctor's surgery, Oakleaf Medical Practice, to make her way to Altnagelvin.

However, a nine-hour wait in pain followed that didn't even result in Mrs McKean being seen that day. As a result, she had to make a return journey where she was eventually X-rayed.

She said: “Six weeks ago, I had sciatica and during the night, it became so uncomfortable that it wouldn't let me walk.

“I had a rollator in the house and I thought I'd use that because there's no way that I would be able to get about.

“Unfortunately, I managed to fall hard on to the ground and I knew that I hurt my back.

“He told me to come over (to the surgery) so I struggled over and he told me I needed to go to Altnagelvin Hospital for an X-ray on my hip because he thought I had fractured that.

“I told him that I definitely hadn't fractured my hip but had hurt my back. The X-ray showed that I hadn't broken my hip.

“I went back to the surgery and the physio went to get the doctor who came back and told me that the physio wanted me to go to Altnagelvin because he thinks you've had a stroke.

“I then get to Altnagelvin where I sat in the waiting area at casualty for nine hours.

“I had been sent to get a brain scan but they wouldn't do one because they said I didn't have a stroke.

“But during all that time, I was in pure agony as having been sitting in A&E for nine hours. My back was broke but the doctors hadn't told me as they hadn't read the report in the bone scan.

“I later had an X-ray and was told I had an L2 lumber fracture. I then had a further MRI scan.”

Unfortunately, that scan would bring bad news for Mrs McKean which was compounded by it being given not by her GP at Oakfield Medical Practice, but by the receptionist.

“I phoned up the surgery to speak to my GP to ask why I have been requested to go for an ultrasound to my thyroid.

“The girl on reception put me on hold and then came back to tell me, 'the MRI scan showed a growth on your thyroid'.

“The receptionist told me that and the doctor himself couldn't even let me know. He didn't even have the decency to phone me and tell me this was happening. Yet it's left to a receptionist to tell me point-blankely because they (the surgery) won't let me speak to a doctor.”

Regarding Mrs McKean's nine-hour wait at Altnagelvin, a spokesperson for the Western Health and Social Care Trust said: “Due to patient/client confidentiality we would not be responding to individual cases.

“If a patient/client or their relative has any issue in relation to their treatment or the service they have received, we would encourage them to raise these issues through the Trust's comments and complaints system - the Patients' Advocate Office.

“The Patients' Advocate Office can be contacted on (028) 7161 1226. All complaints received are investigated promptly and a response issued to the person.”

And in relation to how Oakfield Medical Practice broke the news to Mrs McKean of her thyroid growth diagnosis, a spokesperson for the Health and Social Care Board added: “It would not be appropriate to discuss issues in relation to individual patients.

“The patient should raise her concerns with the practice in the first instance and if not satisfied following that can approach the Health and Social Care Board through the complaints process.

“If the complaint cannot be resolved through the HSC Complaints Procedure the patient can approach the NI Public Services Ombudsman.”

“Their shouts of slogans and graphic imagery that distort reality is causing real psychological damage. It needs to stop.”