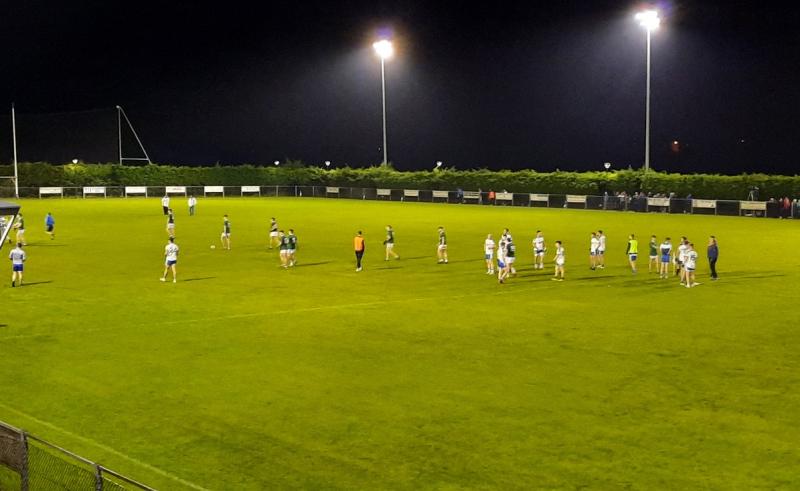 Newbridge got their championship season off to a winning start against Ballinderry in a drab encounter under lights at Shamrock Park on Thursday night.

A goal from Paudi McGrogan had the 'Bridge 1-2 to 0-0 ahead after nine minutes after they pressed up on Ballinderry and punished them at every opportunity.

The Shamrocks were awarded a 24th minute penalty when Nathan Rocks hauled down Gareth McKinless. In the three minutes it took for McKinless to receive treatment and Declan O'Connor to consult with officials, Rocks was lucky to escape without a black card.

Up stepped Dermot McGuckin to slot home the penalty, making the score 1-2 to 1-3 in Newbridge's favour. Rocks' resultant kick-out found the run of Conor Doherty and move was finished off by his brother Mark with a well struck score on his senior championship debut, in front of the watching Derry manager Rory Gallagher.

Ballinderry struggled from their kick-outs and when Aidan McGlone won possession back, a foul on Jude Diamond gave Conor McAteer the chance to tap over the free to cancel out the goal and put the 'Bridge 1-5 to 1-3 ahead at half-time.

The third quarter was a dour spell. Conor O'Neill and Ryan Bell missed frees for the Shamrocks, who lost Ben McKinless to a shoulder injury after a heavy challenge from Michael Bateson who came on seconds earlier. Tommy Donnelly replaced McKinless, with Glenn McOscar going into goals.

A brilliant Aidan McGlone point after an equally excellent cross-field pass from Conor Doherty had Newbridge 1-7 to 1-4 in the lead at the water break.

McAteer kicked over a great score from distance in the final quarter, but Ballinderry were still in touch. Daniel Bateson began to run at them and it won two frees but both were missed.

On one occasion Darren Lawn got inside, but he was shepherded sideways by Dessie McColgan who mopped up a dangerous high ball seconds later.

Newbridge turned over another Ballinderry kick-out and it was punished by Conor Doherty's second point of the day.

With a final throw of the dice, a high ball into the Ballinderry attack from Dermot McGuckin was touched down by Ryan Bell and substitute Shea Coleman scored the Shamrocks' only score from play.

Newbridge now face Coleraine in Round 2, with Ballinderry up against Banagher.