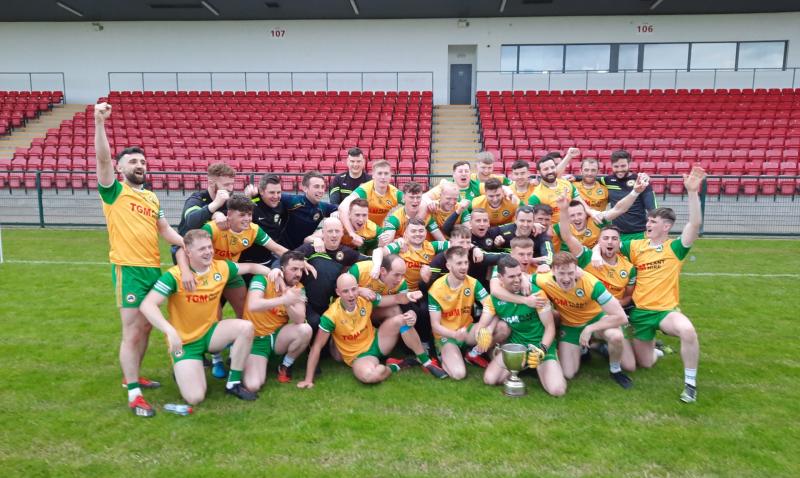 After 53 years wandering in the championship wilderness, Desertmartin left it until a dramatic finale to get their hands on the Joe Brolly Cup in a pulsating finish to Friday's final at Owenbeg.

Five days before the decider was due to be played last October, a second wave of Covid-19 pushed pause on their season, leaving themselves and Craigbane in the dark.

After annexing the 2020 minor and U16 titles after refixed finals, it was the turn of Desertmartin's senior team to bring home the bacon and they had to do it the hard way.

When the dust settles on this victory, they'll appreciate the battle even more after a litany of setbacks.

Moore had four points on the board and it was his quick-thinking that made the goal.

Craigbane lost Jude Óg Moore to a black card, but still went in ahead at the break, 1-6 to 0-7.

Desertmartin had Paul McCrystal sent off on a second yellow card for a charge on goalkeeper Paul Sharkey in the 36th minute and manager Kevin O'Neill was forced to abandon their sweeper and go man for man.

Two Gavin McGreevy frees had Desertmartin back on level terms after 45 minutes and they were full value for it, but Lee Moore and Conor McLaughlin restored Craigbane's lead by the second water break, 1-8 to 0-9.

James McGrath's side had a chance to take the sting out the game, but after a fine counter attack from Naoise O Mianáin, Cahir O'Kane went for goal from a tight angle and goalkeeper Adie McGuigan judged his angle to perfection to make the block.

It gave Desertmartin the lift they needed.  When an Enda McGuckin sideline ball was worked short, Eunan McElhennon dissected the posts before the game entered the dramatic closing stages.

A probing Fergal Mortimer wasn't won in the Craigbane inside line and Desertmartin cranked their running game into gear.  But they needed an almighty slice of luck.  An Adie Trainor delivery, a hit and hope effort, looked to be going wide.  Somehow it was kept in play, where Oran Kelly worked the ball across goal and after Enda McGuckin's poked shot game off the bar, it rebounded into the net off Craigbane defender Oisin O'Donnell.

Adie Trainor sliced over the bar to put three points between the teams.  Craigbane kept coming in waves and almost found the net themselves.  It was similar to the buildup to Desertmartin's goal.  The ball ended up in the hands of Tiarnan O'Connor, who had a fine game in attack all night, but his piledriver was brilliantly saved by McGuigan.

And still Craigbane kept coming, but like their play over most of the game, they failed with the final pass.  They just didn't have that clinical edge to make their attacking game count and an inspired Desertmartin threw bodies in the line.

After 53 years of being the nearly men, the Yellas weren't letting go of the cup.  It was a spirited performance that matched the grit of their opponents.