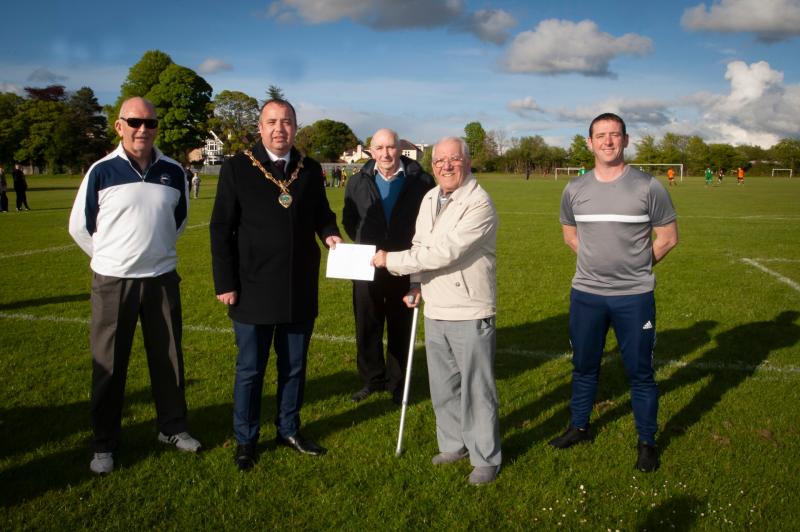 The Derry and District Senior Football League will celebrate its 100th anniversary this year.

To mark the milestone, the Mayor of Derry City and Strabane District Council, Councillor Brian Tierney, has revealed that the local council will be covering the cost of the playing pitches for the season.

Mayor Tierney attended the launch of the event at Clooney Park West on Monday night where the gesture was announced that he would pay for approximately 86 games between the 17 teams who have registered for the league’s centenary year.

Speaking at the event, which took place before the game between Foyle Harps and Lisahally, he praised the network of volunteers who have helped bring the league to this significant milestone and wished the teams well in their bid to have the distinction of winning the centenary league title.

“The Derry and District League has played a central role in community of life for a century now offering recreation and a platform for footballers to express themselves,” he said.

“Some of the best players to come out of the city cut their teeth in the league including Liam Coyle, Paddy McCourt and more recently Shane Duffy and Aaron McEneff who benefited from the chance to play against men in their formative years.

“The league is completely amateur and the games are only made possible by the dedication of the network of volunteers who look after the significant administration required to run it from booking pitches and referees to organising fixtures and tables.

“I would have loved the opportunity to recognise that dedication in the form of a civic reception at the Guildhall however I hope my covering of the cost of the pitches will go some way towards making up for that disappointment.”

League Spokesperson, Christy McGeehan, thanked the Mayor for his gesture.

"This is a great gesture from Mayor Tierney and shows that Council value the central role the league has played in the Derry community over the years," he said.

"We are delighted with the high number of clubs who have registered for this year's league and hopefully the centenary year will mark a resurgence for the league as numbers have been lower in recent years.

"We have a thriving underage league and I am delighted that more of the clubs are now fielding a senior men's team as it keeps more young players involved in the game and the opportunities and pathways it offers them to develop."