Oakleafers' late rally not enough to start the season with victory 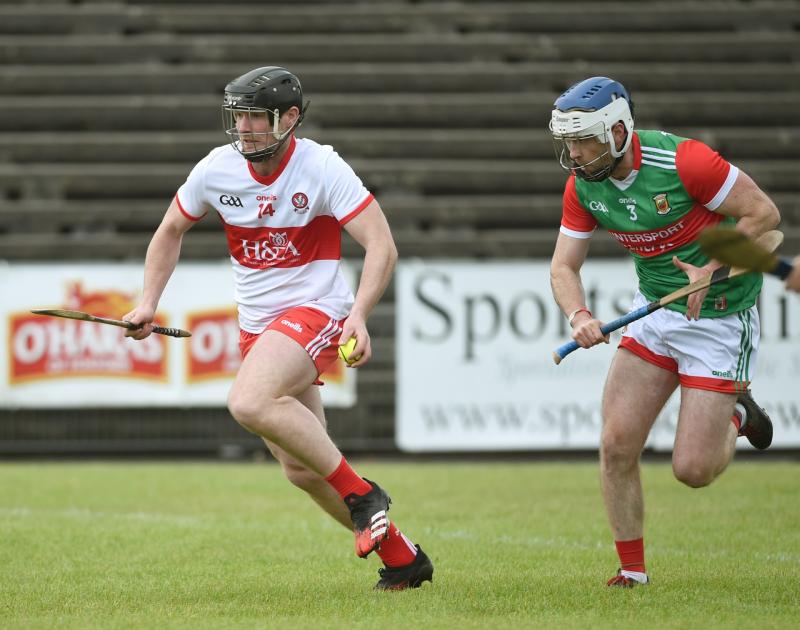 Sé McGuigan gets away from Michael Morley. (Pic: David Farrell)

Derry's promotion hopes took a hit on Sunday in Castlebar after the Oakleafers went down to Mayo in Round 1 of the league.

A storming finish, spearheaded by Niall Ferris' goal, had Dominic McKinley and Cormac Donnelly's side back in the game, but a late Brian Hunt insurance point sealed victory for the home side.

Mayo had the use of the breeze in the first half and had the ball over the bar in the first minute from a Shane Boland free.

Niall Ferris replied with a point, but Derry had a goal chance only for Brian Cassidy's shot to come back off the post.

Derry lost Darragh Cartin to injury and it was Mayo who went into a 0-4 to 0-2 lead with points from captain Keith Higgins and Adrian Philips.

Mayo totted up 10 wides in the first half, but with long-range efforts from Sean Regan and Cathal Freeman, Mayo led 0-9 to 0-3 after 28 minutes.

Derry stayed in touch with O'Doherty frees before Boland nailed a fourth free to open up a 0-10 to 0-5 lead for the home side at the break.

O'Doherty had the ball over the bar seconds after the restart, followed by two frees, giving wind-assisted Derry a positive start to the second half.

Freeman, Boland and Keith Higgins added points from the home side, who went into a 0-18 to 0-11.

Just when the game was going away from them, Niall Ferris found the net to give Derry a lifeline after 56 minutes.

O'Doherty, from a '65' and Brian Cassidy tagged on points as Derry narrowed the gap to a point before Shane Boland fired over an inspirational score from close to the sideline.

Derry needed a goal in stoppage time and after a high ball into the Mayo square, Gerard Bradley fired over the bar.

It was Mayo who finished strong. Keith Higgins was involved in the move for Brian Hunt's insurance point.

In the other game in Division 2B, Ronan McDermott scored a late goal as Donegal were 1-13 to 1-11 winners over Roscommon in Letterkenny.

Next Saturday, Roscommon host Mayo in Round 2, with Kildare at home to Donegal.

Derry's have a bye next week, but play Christy Ring Champions Kildare on Sunday, May 23 at 4.00pm.