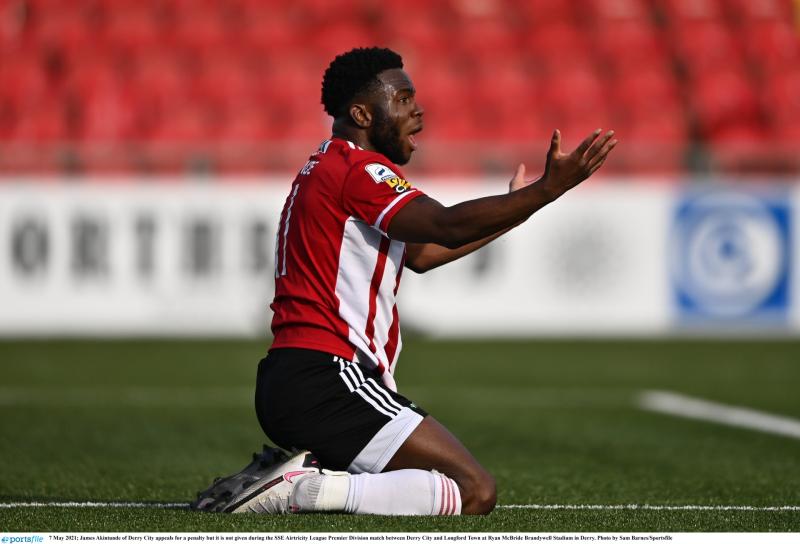 James Akintunde scored a last-gasp equaliser to save Derry City a point against Longford Town.

Akintunde’s deflected shot squeezed past goalkeeper Michael Kelly to frustrate Longford, who thought they had all three points tanks to Rob Manley’s goal.

City had not looked like scoring for most of the game after a positive start. Eoin Toal came close on 15 minutes when another Patching delivery tempted Kelly off his line, but the Longford goalkeeper missed the ball completely and Toal headed towards the open net, only for Dean Zambra to head the ball clear off the line.

Longford held out for the first half hour before they troubled the goal at the other end, and it was a decent chance as Shane Elworthy’s cross eluded Toal and landed on the head of Aaron Robinson, but the defender’s header was straight at Nathan Gartside.

City were out of the blocks quickly in the second half in response to Ruaidhri Higgins asking for more, and Patching went direct this time, driving a shot at goal which Kelly couldn’t hold, but David Parkhouse couldn’t tur the rebound in under pressure from McDonnell.

Derry came close again on 54 minutes as they began to create in the final third, and Kelly had to dive full length to push away a Parkhouse header after Ciaran Coll’s cross.

Longford took the lead with just 15 minutes to go. A hopeful ball into the City area was not dealt with by the home defence and Rob Manley reacted quickest to the loose ball to hook it past Gartside from close range.

Kelly kept out Patrick Ferry’s volley as Longford hung on desperately, but their resolve was eventually broken when the ball broke to Akintunde in the area and his shot on the turn somehow squeezed into the net much to Derry City’s relief.