Derry's 'Magnificent Seven' singers back in action this week in a bid to hit £20,000 target for local food bank 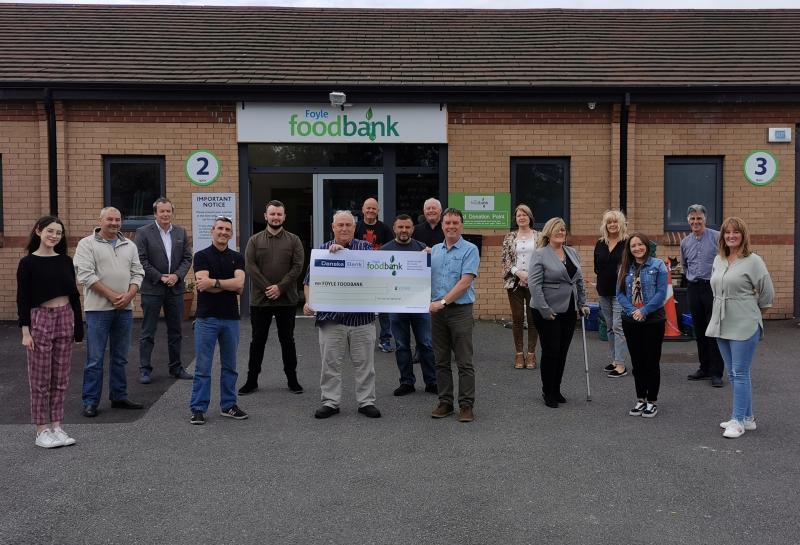 The singers hand over money on a previous occasion to the local food bank.

A group of musicians raising funds for a Derry charity will stage a 'Halloween Special' this week as its target of £20,000 gets ever nearer.

In April, over 30 performers answered the call by well-known local musician, Leo Fitzpatrick, to perform live on Facebook after Covid-19 restrictions prevented them taking to the stage.

An initial target of £10,000 for Foyle Food Bank was achieved, but Leo was not prepared to sit back and set a new target of £20,000 – and again, the musicians fell in behind him.

The Food Bank was set up a number of years ago to help those in need but with the coronavirus pandemic pushing more people into poverty, the demand for its services have increased dramatically.

Leo said: “Every day people go hungry for reasons ranging from redundancy to receiving an unexpected bill on a low income.

He explained how the Food Bank works.

“Volunteers sort food to check that it’s in date and pack it into boxes ready to be given to people in need. Food banks partner with a wide range of care professionals such as doctors, health visitors, social workers and police to identify people in crisis and issue them with a foodbank voucher.

“Food Bank clients bring their voucher to a Food Bank centre where it can be redeemed for emergency food.

“The money we are raising will go a long way to putting food on the table for many people, especially in these unprecedented times and the run-up to Christmas.”

Speaking about the Halloween Special, he said: “The team on their way to £15,000 and are hoping the public can help by donating on the night to paypal.me/ foylefoodbank to help the food poverty in Derry and surrounding areas.”

The 'Special' gets underway tonight with Wayne Rodgers.

Others who have performed have included the Campell sisters (Frances, Maureen and Lana), Andrew Monk and Felix Healy,

Leo added: “Drop in to one of the shows and do enjoy these singers giving up their time free for a great cause. The Stream link is www.facebook.com/ MAGNIFICENTSEVENCRE.

He concluded: “Thank you in advance for any donations. Stay safe folks.”

Richard, 49, had always considered himself fit and healthy.

However, this all changed when a chest infection quickly developed into a heart condition and he suffered from two major strokes followed by 19 mini strokes, leaving him unable to work.

HIs situation deteriorated further when he separated from his wife and moved out of their family home where, unfortunately, due to this change of address his Employment Support Allowance (ESA) was delayed.

Richard admited he never expected to be in this situation.

He recalled is first visit to the Food Bank: “On arrival, I was put at ease straight away. The volunteers were fantastic, offering a chat and a shoulder to cry on. I suffer from depression as well and without the foodbank I don’t think I would be here today.”

Richard looks forward to seeing his 10-year-old daughter every weekend and admitted he skipped meals on a few occasions so she could eat.

He added: “It’s a really bad situation that people have to decide whether they can feed themselves, feed their children or put the heating on. It’s a case of having to budget or having to go without.”

At the moment things are still tough for Richard - he is on the waiting list for a heart transplant and will be on medication for the rest of his life - but said he was 'grateful' the Food Bank was available if he ever needed some extra help.