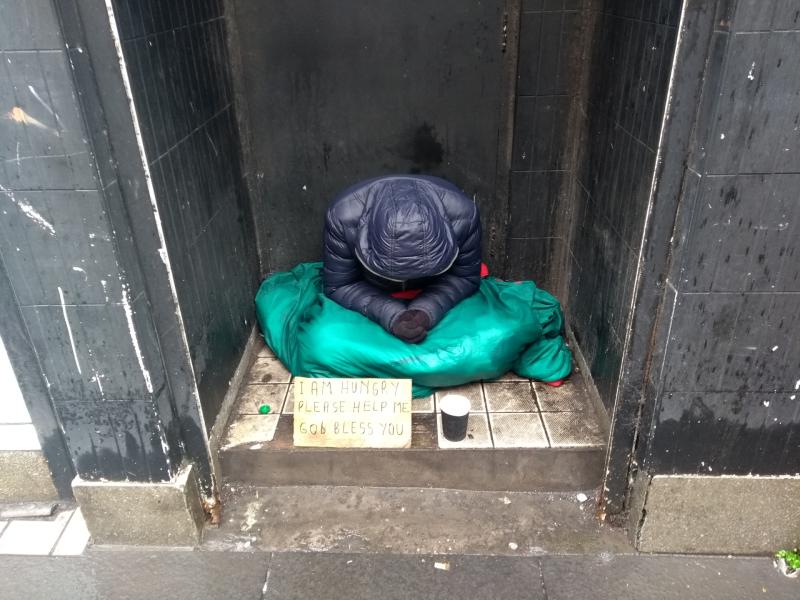 Almost 3,000 families and individuals are homeless in the Derry and Strabane area, the Derry News can reveal.
According to the latest Housing Executive figures 616 households in the area have been accepted as statutorily homeless.
As of September, 2,835 applicants have been awarded Full Applicant Duty Applicant (FDA) status, which means they have met the NIHE’s four tests for homelessness.
A spokesperson for the Housing Executive explained: “From 1 April 2019 to 30 September 2019 there were a total of 8,750 households which presented as homeless across Northern Ireland, with 5,827 of these households accepted as statutorily homeless.
“Within the Derry City & Strabane District Council area there were a total of 1,049 households which presented as homeless from 1 April to 30 September 2019 with 616 of these accepted as statutorily homeless.
“Also, as at 30 September 2019 there were 20,485 applicants in Northern Ireland awarded Full Duty Applicant (FDA) status on the waiting list; the number in Derry City and Strabane District Council area was 2,835.”
In Northern Ireland the Housing (NI) Order 1988 identifies the Housing Executive as the agency tasked with responding to homelessness.
The Order places a statutory duty on the housing authority to provide interim and/or permanent accommodation for certain homeless households, dependent upon investigations and assessment of their circumstances.
The spokesperson continued: “In order to be ‘accepted’ as statutorily homeless, a household must meet the four tests of: Eligibility, Homelessness, Priority Need and Intentionality.
“Any household that meets these four tests will be accepted as a ‘Full Duty Applicant’ and will be owed a full housing duty. The full housing duty includes ensuring that accommodation is made available for the household as well as the provision of temporary accommodation where necessary and assistance with the protection of the household’s belongings.”
In Derry, the Simon Community is currently supporting 33 clients. Between 1st November and 5th December it had 33 referrals for beds in the city with 11 people securing a space.
“We notice that in Winter, our beds experience very little turnaround with move on options becoming more scarce and clients more willing to remain with us to see through the period,” a spokesman for the homeless charity added.

Eileen Best is Director of Operations at First Housing Aid and Support Services, a voluntary sector non-profit making organisation in operation since 1989 which provides professional advice on housing in Northern Ireland and solutions to people who find themselves in housing difficulties.
Last year seen a spike in people sleeping rough in Derry city centre around Christmas time. Civic leaders then took the unprecedented step of advising the public to donate money to official charities in order to avoid perpetuating the issue of “organised street begging” in the city.
Ms Best said a street count conducted by the Housing Executive late November found no evidence of people rough sleeping in the Derry area, which is in contrast to last year when there was a substantial number sleeping rough.
“We have seen evidence of a few foreign nationals visible on the streets this winter but the difficulty is that the Housing Executive has no statutory duty towards them the Housing Executive is driven by legislation and unfortunately these people have no recourse to public funds,” she explained.
Whether they are homeless or street begging, as some have speculated, Ms Best said it is a “bad situation to be in either way” because there is a reason for it.
“All homeless people don’t beg, and all beggars aren’t homeless. It’s about people’s choice and whether they feel they want to make a donation to somebody in that predicament. I wouldn’t want to be in that predicament myself where I feel that I have to beg to survive; it would be a terrible situation to be in.”

There is homelessness in the North West, she said, but there are preventative services in place in the form of the Housing Executive and Supporting People Programme.
Hidden homelessness is also difficult to gauge, that includes people who become homeless but find a temporary solution by sleeping in their car, staying with family members or friends, living in squats or other insecure accommodation.
“We have services that work on preventing homelessness in the city, we have accommodation with support, we have floating support services and also the crisis response night outreach team who regularly patrol the streets to ensure that people who are rough sleeping are given a fast response.
“We make sure they go to the Housing Executive or are placed in a hostel, Damien House would normally be the first point of contact.”
Ms Best said she’s "happy" with the partnership between organisations in the North West which means “nobody is on the streets for any great length of time, and if they are, they’re picked up quickly by the services that are available.”