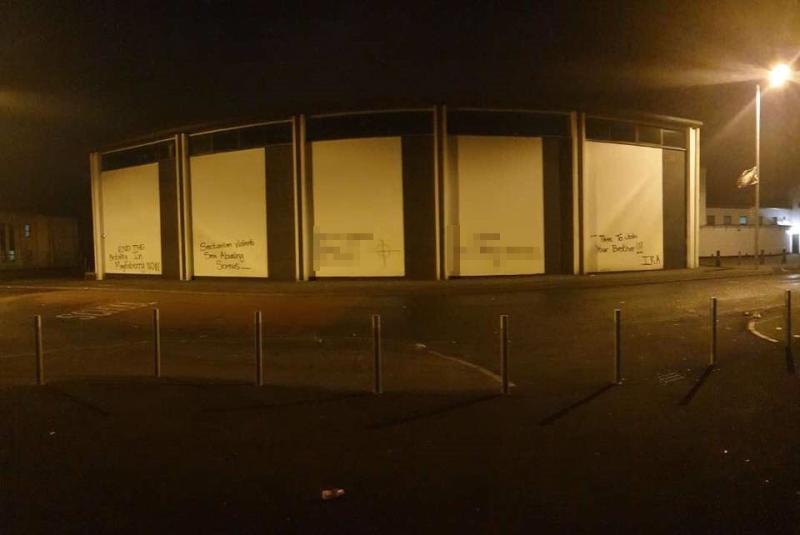 The graffiti appeared overnight in Creggan.

A death threat to prison officers purporting to be from the ‘IRA’ has appeared on a wall in Derry’s Creggan estate.

The graffiti was written on the wall of a community facility at Central Drive overnight and names three serving prison officers at Maghaberry jail in Co Antrim.

The spray-painted message also refers to a prison officer murdered by the Provisional IRA over 30 years ago and states in reference to the three current named prison workers, ‘Time To Join Your Brother!!!...IRA’.

One section of the graffiti says: ‘End The Brutality in Maghaberry Now’, followed by ‘Sectarian Violent Sex Abusing Screws’. The graffiti then names three prison officers beside which a drawing of a rifle’s cross-hairs appears.

The graffiti continues with a reference to Brian Armour, a prison officer murdered over 30 years ago. The 48-year-old was vice-chairman of the Prison Officers Association and was driving close to the Beersbridge Road in Belfast when a booby-trap bomb placed under his car exploded.

In 1990, former prison warder Christopher Hanna was jailed for aiding and abetting the murder of Brian Armour. Hanna died in prison two years into his prison sentence.

Ivor Dunne, Chairman of the Prison Officers Association told the Derry News that he views the incident as “absolutely deplorable.”

“Prison officer’s carry out their duties with impeccable impartiality. Words just can’t express how disgusting this is. We have supposedly moved on with the Good Friday Agreement, but some people obviously want to pull us back.

“The role of prison officers is very diverse and has changed significantly since 1998.”

It is not the first time this year that graffiti threatening prison officers has appeared in Derry.

In July, graffiti stating ‘Maghaberry Screws Beware – IRA’ also accompanied by a drawing of a rifle scope appeared in Creggan.

And, in January 2018 graffiti also appeared at Central Drive in Creggan naming three prison officers and stating ‘We Only Have To Be Lucky Once’.

Meanwhile, police are appealing for witnesses following what they called a report of criminal damage in the Central Drive area of Derry.

In a statement to the Derry News a PSNI spokesperson said: “At approximately 9.45am today, Monday, December 2, police received a report that graffiti had been painted on the wall of a property in the area sometime overnight.

“Police are appealing to anyone who witnessed this incident or who has information that could assist police with their enquiries to contact officers in Strand Road on 101, quoting reference 420 02/12/19.

"Alternatively, information can also be provided to the independent charity Crimestoppers on 0800 555 111, which is 100% anonymous and gives people the power to speak up and stop crime.”