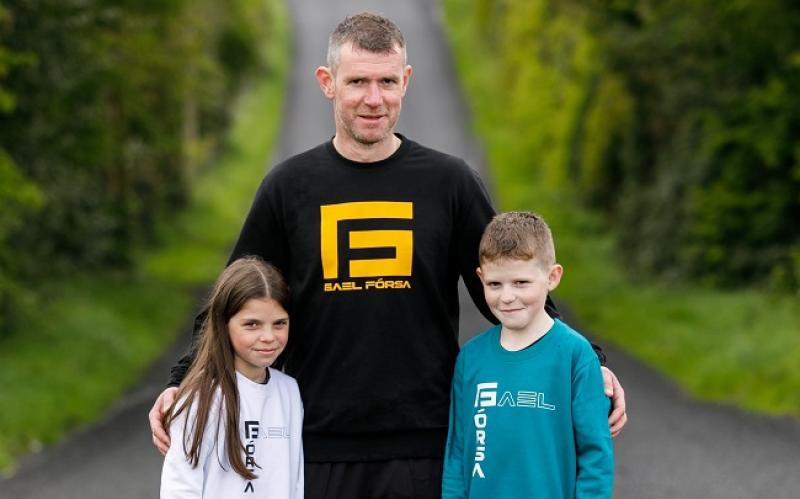 As the Derry club championship begins the rise to its crescendo, a new local GAA leisurewear brand continues to spread its wings.
Gael Fórsa, the brainchild of former Slaughtneil and Derry dual player Fergal McEldowney, launched in April and fuses between Irish culture and a simple yet popular casual fashion range. It's clothing perfectly suited to the GAA fan looking for something slightly different, without club crests and sponsor logos.
Fergal, along with his twin brother Fergal and friend Paul Hughes – Chairman of Derrytresk– is happy with how their brand has progressed. Originally, they had planned to launch for Christmas, but a change saw them get the ball rolling in April, in time for the twins' 40th birthday celebrations.
“It gave us something to focus on and one of the jumpers has 81 on the back, to signify the year we were born,” Fergal told the County Derry Post.
There was always an interest in designing and a clothing brand was never far from his thoughts. During his playing days, he'd never be far away when new kits were being deigned. A retro jersey released as part of Slaughtneil's gear range had his fingerprints on it.
“We are from a farming background, it is not the sort of thing you'd associate us with...getting into fashion,” Fergal jokes.
“But, it's always something we have been interested in. I just think a lot of the GAA gear is based on playing members and wanted to do something different to appeal to our non-playing members as much as players.
“A lot of it will carry club badges and sponsor logos, whereas not everybody wants to wear that kind of product to go to games.”
Still playing for the club's recreational team, he coaches the U11 footballers and hurlers. There is a pride in pulling into Emmet Park and seeing the Gael Fórsa range, across different ages and colours.
Interchangeable caps. Beanies. Shorts. Sweatshirts. T-Shirts. Half-zips. From black to white and green to mango, there is something for everyone.
“I am not necessarily going to pull on my club gear, but I still want to pull on something that will associate you with the GAA,” he explains of their brand's unique selling point.
The name – Gael Fórsa #WeAllBelong – was spun out of that inkling he had all those years ago.
“I always had it in my head, that if I ever did start up a brand, that Gael Force would be the name I would go with,” Fergal explains.
“We wanted to keep the Irish slant on it as well. It is very important to the club and community.”
And so, Gael Fórsa – True Gael – was born. After some scribbling with the lettering, the logo eventually came to life 'by accident'.
“The plan was to launch it on the lead up to Christmas”, Fergal adds. “Then we thought, the idea is there and we'll get something out there. Me and Francis, it was our 40th birthday in April, we'd give ourselves a date to work to, to have the product launched.
“We are very thankful for the support we have got from everybody. You now notice now the orders coming in, even from other counties, so it definitely seems to be going the right way.”
Nestled deep within the brand is the importance of knowing that the game is much more than being part of the squad and taking to the field. It is about identity. A sense of belonging and inclusivity. Being part of a community of like-minded people with a mutual love for traditions and heritage.
“So much of our young children and adult lives have become about the constant need to train, to diet, to play, to watch, to support, to belong but ultimately to win,” Gael Fórsa outline in the story on their website.
“Gael Fórsa is about getting away from these pressures and the responsibilities of the game.
We want to take it back to the basics. It’s about the enjoyment of it all and putting smiles on peoples faces.
“The Gael Fórsa range offers high-quality, comfortable and eye-catching men’s and ladies leisurewear. It aims to reinforce the customer’s sense of identity. To be more than just about the game. It’s about being part of something bigger.”

For the full range, check out their website: www.gaelforsa.ie