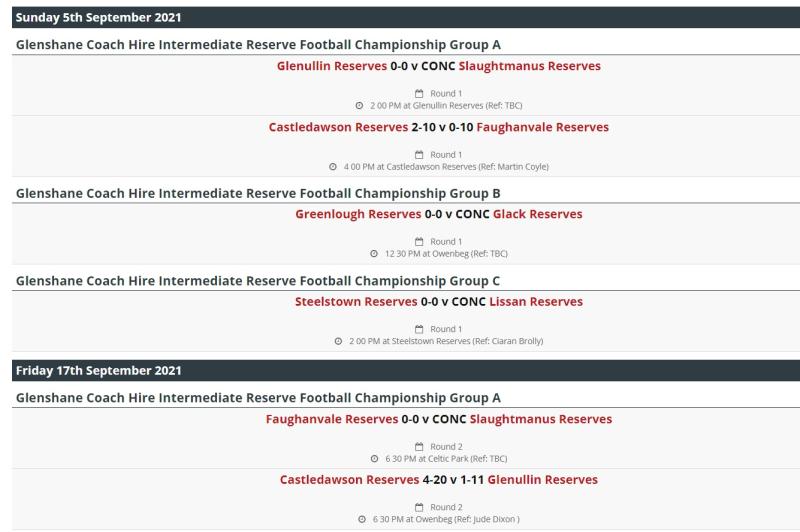 The 'two and half three' slot on a Sunday was the centre of club football's universe. The window when the sporting acumen of the local community was dissected with a fine tooth comb.

The reserves took the field at two o'clock in front of one man and a dog. And by the time the game headed for the final furlong, cars would be trickling in the lane for the senior game. Elbows on the wire, the elder statesmen of the club would surmise who the best reserve players were.

“Yer man would need to take a look at Johnny,” one might offer. “He's lording it out there.” There would be a nod back. Sport is all about opinion.

With more people filing into the ground, the noise level will go up. Enter the club time-bomb. We all know them. The sort who would argue a black cat white. The man from the opposing club, who was acting as linesman, would have his line ball decision questioned. And all of a sudden chests would be pumped out and a mouthful of choice words exchanged.

Often, it sets the tone for the senior game. But the double header gives reserve players an identity. Some will stay togged out for the seniors. Others will get the disco shoes and the hair gel slapped on for the few scoops down the pub later. Some will huff and puff that the senior manager doesn't rate them.

A few weeks back, I was in Owenbeg for Newbridge's win over Coleraine. Being early, I mixed typing up a few match reports with watching the reserve game. Alan Nash let it flow from end to end, with the senior managers looking on before taking their squad away to prepare for the main event.

There was just that united feel to it all. A group of players who trained on Tuesday and Thursday night, went to the gym together, slagged each other in the same What's App group during the week, they were all on an even keel.

Give or take a man or two, Newbridge have a senior/reserve panel of 38 training most nights. Coleraine's panel sits around the '42 or '43' bracket. It's the most they've had in ages offers Ryan McGeough, their affable two-time championship winning goalkeeper who has now stepped into the role as club Chairman.

Mathematically, double headers are not a problem here. But it makes for a juggling act. Newbridge manager Killian Conlan offers the conundrum of how many players to hold off reserve duty. Most clubs are the same. Who am I Iikely to use in the senior game? And it's not an exact science.

It brings me back to the days of watching Sunday double headers. Being taken off in the reserve game was an elevation in status.

“I told ye....Johnny (the same one mentioned above) must be in the senior manager's plans,” offers the club stalwart.

This is the problem with being the fringe player. You're caught between two stools. Half a game here, five or ten minutes there.

Formation changes, injuries, black cards and poor performance all need to be thought through. The players caught in the middle can miss out on action. The four Newbridge senior subs (who had a combined total of 51 minutes senior action) were held off reserve duty, including Mickey O'Neill who came on with minutes to go in a game that was decided while he was on the pitch. His chasing back helped force a turnover on the way to the 'Bridge's winning point

In a scenario like Newbridge, moving up the pecking order in the Derry club scene is their mantra. Men caught in the middle just have to ride it out and push like mad for a senior place.

Odhran McGlone's brief was to put Sean Leo McGoldrick on the back foot, which he did with four points in an all-action 45 minute performance before his fuel light began to flash and PJ O'Neill came in to keep them ticking towards the finish line.

The 'Bridge were the only team guaranteed to finish top of their group before a ball was kicked at the weekend. Would they have got over the line against Coleraine without fresh legs? That's debatable.

The previous night, Sean Cassidy came on in the 48th minute of Slaughtneil's defeat to Lavey. Having played in the reserve game, he was back in action again and fisted over a point within minutes of coming on.

Every club's circumstances are different. There are dual clubs, there are suspensions and there is Covid.

It's all rosy if you have the numbers. Sideline View conducted a mini poll of club senior panel sizes, not counting short-term injuries or any Covid-19 related unavailability. With the exception of Claudy's panel of 24, the other 11 Division 1A clubs have a senior panel capable to fielding senior and reserve teams on the same day.

At junior and the lower end of intermediate level, the story is totally different. The remaining 13 clubs, were under the 30 number required to field two teams in one day, without needing to coax a few retired players back to fill out the team to ensure everybody gets football.

Concessions dominate the results pages. Of the 18 intermediate reserve championship group games fixed, only four were played. Four. It has been really sore on clubs who have the numbers.

On top of their senior squad of 26, Steelstown have a reserve panel of 28. With the need to grow GAA in the city, not having a reserve championship game leaves it very difficult to maintain player retention. Why stay when other sports can offer more.

Castledawson, Faughanvale, Glenullin and Drumsurn are other intermediate teams who didn't get their full compliment of games. Intermediate champions Greenlough had a recent in-house 15 versus 15 game, with nine substitutes. Their reserves have had a in one game in almost nine weeks.

In many cases, clubs cannot field a senior and reserve team on the same night. Midweek reserve fixtures at 6.30 leave it impossible for some to get home from work on time, taking the numbers even lower again.

The reserve and senior double headers of old at the weekend give the best chance to return to the status quo. As this column has alluded to in the past, Saturday evening would be a better option. But it doesn't suit everyone.

With a fluid situation, there needs to be a look at the future of reserve football and where it fits. Clubs should only enter a team if they can fulfil their games and allow the CCC to restructure. For example, Desertmartin seniors are playing in the junior ranks, yet have a squad of 40 and traditionally were always very successful at intermediate reserve championship level.

Clubs could be asked for their input into how everything could fit together. Senior managers, with input from their club committees, should look into – and be accommodated by the CCC – moving their reserve game to a different night, possibly a training night. One of the management team could take charge of the reserves and everyone else trains.

When Ronan Rocks was in charge of Desertmartin, he phoned ahead every week to request a Friday reserve fixture. It was almost always accepted. Stephen Barker, the CCC Chairman at the time, was only too glad to accommodate it and inform the referee of the revised fixture.

It takes a bit of give and take between clubs, but overall it would be a step in the right direction. And if one club fails to agree a move, then the fixture remains as it is.

The days of 'two and half three' on a Sunday have gone forever in certain quarters. The next step is to make sure the level of conceded reserve games disappears until everyone is playing on a regular basis. That has to be the goal, for the long-term future of clubs.