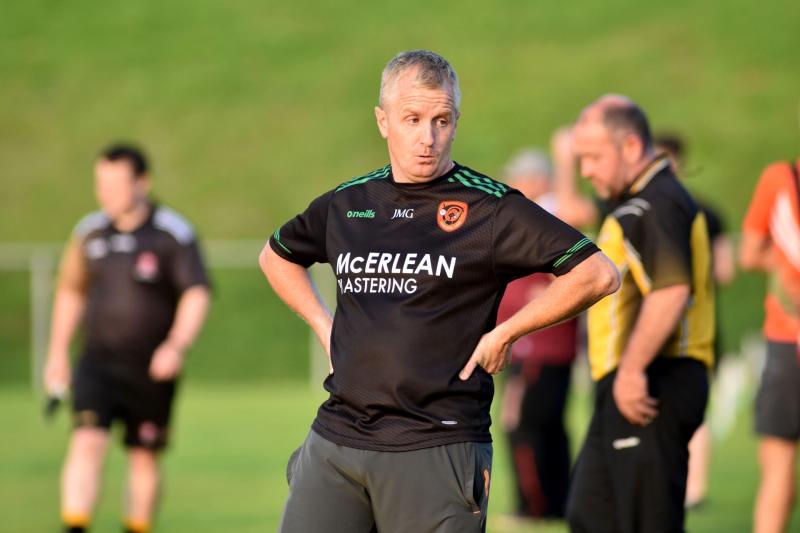 Lavey manager Johnny McGarvey will be hoping side gets back to winning ways against Na Magha. (Pic: Mary K Burke)

It's a busy week on the hurling front with two rounds of group games down for decision.

The top two teams in each section will advance to the senior championship semi-finals.

The two beaten senior semi-finalists will drop to the intermediate semi-finals.

The bottom two teams after the group stages will also play off. The winners will advance to the intermediate semi-finals, with the losers set to contest the junior final.

The Derry senior champions will play the Antrim winners in the Ulster semi-final.

At intermediate level, the Derry champions face the winners of Armagh at the semi-final stage, with the Oakleafers' junior champions set for a quarter-final with the Cavan champions.

After wins for both teams, something will have to give at Fr McNally Park.

Brendan Rogers hit two first-half goals in the league meeting, a comprehensive Slaughtneil victory, and was central to the champions' win over Ballinascreen in Round 1.

Banagher found it hard to fend off Coleraine in their first group game. It took grit in defence to fend off Leo Passmore's long wind-assisted puck-outs in the first-half before a four-point brace pushed them them clear.

Oisin and Darragh McCloskey formed a formidable half-back line with Mark Lynch, who looks doubtful after limping out of Banagher's football defeat to Coleraine with a hamstring injury on Friday night.

In attack, Sean McCullagh is their axis on the edge of the square with Tiarnán McCloskey playing at centre-forward.

Slaughtneil are chasing a ninth title and a win would seal their semi-final spot.

The Emmet's have that ability to create and take goal chances and they'll be tipped to come through.

Ballinascreen were on the wrong end of a double score defeat at the hands of Slaughtneil in Round 1.

They host a Coleraine side that pushed Banagher for 40 minutes of their first game before falling away. That was without Ruairi Mooney, Kosta Papachristopolous, Liam, Barry and Colm McGoldrick, the latter of whom manages the team with Brendan McNicholl.

'Screen manager Cathal McDaid will ponder the input of three players – Ciaran McBride, Reece and Conor McSorley – who came off the bench to score against Slaughtneil when they sit down to make their selection this week.

Ryan Scullion showed up well at Emmet Park and Noel Rafferty scored one of their goals, but if they are to get their championship season back on track, they'll need to up the ante across the board.

Sean Leo McGoldrick will always chip in with scores and he could have defender Charlie Gilmore for company . If 'Screen can limit the goal chances.

Paul Cleary returned from injury for the championship and – along with John McCloskey and Anton Scullion – he can put their stamp on the midfield sector, 'Screen should come through this one.

It took late points from Sean and Conor Kelly to see off Lavey in the last round and Kevin Lynch's will face another battle this week. Swatragh had rebuilt under Declan McGuckin and Seamus Bradley.

Last year, they were unlucky not to topple the Lynch's, but after winning the intermediate championship they came back strong for a consistent league campaign. And all without the input of Eoghan O'Kane who is currently unavailable due to work commitments.

Cahal Murray scored 1-3 on his debut, with Sean Francis Quinn having a hand in both goals. Sean Martin Quinn and Fintan McGurk have been scoring consistently through the season, with Patrick Turner also returning to the defence.

Shane Elliott admitted the Lynch's were lucky against Lavey and they'll know that a greater desire in the midfield area will be needed to gain an upper hand at midfield.

Moving John Mullan there gave them a better balance. Aside from their starting team against Lavey, they have Darragh McGilligan and Padraig O'Kane to consider in their plans.

A tight game in prospect with the winner likely to avoid Slaughtneil in the semi-final. Kevin Lynch's left their last game with more questions than answers and if they can find an improvement, you'd fancy them to make it two wins from two.

This game will double up as the unplayed league decider between the clubs.

Lavey are joint top of the league on points with Kevin Lynch's who still have their game with Carrickmore to fit in.

The Lynch's lead on score difference (by 22 points) and with the teams having drawn in their league, scoring is likely to decide the title.

John McGarvey's side can count themselves very unlucky not to have got at least a draw from their opening game, an entertaining clash with Kevin Lynch's. It was their first defeat of the season.

They bossed the puck-outs for much of the first-half and played with purpose, yet only went in on level terms.

Na Magha, in their first game, made a brave attempt at a comeback from 11 points down to Swatragh at half time.

They were missing Deaglan Foley and lost Tim Rankin early on to injury.

Goalkeeper Barry Robinson had a fine game between the posts.  They will hope to have Rankin and Foley back to support Pádhraig Nelis and Breandán Quigley in their middle third.

It will be an uphill battle against a Lavey side determined to bounce back with a win.

The pick of the Round 3 games will be Lavey's clash with Swatragh and Banagher's meeting with Ballinascreen. Depending on Wednesday's results, they will have all to play for in the final round to finalise their league placings ahead of the knock-out stages.