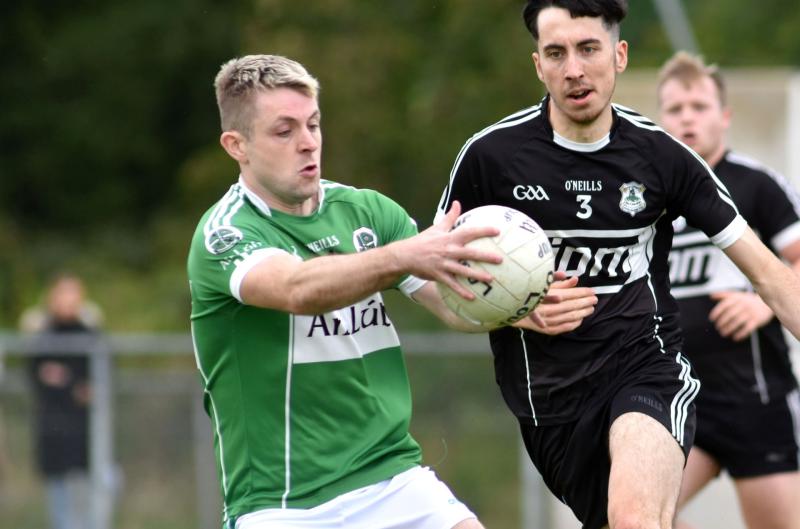 A 55th minute Anthony O'Neill point earned Loup a share of the spoils against Swatragh at a blustery Davitt Park on Sunday afternoon.

The home side had the aid of the elements and led 0-9 to 0-2 at half-time and two Ciaran Devlin goals helped Paddy Bradley's side back into contention.
Francis Kearney had a tough kick into the teeth of the wind to win the game, but referee John Joe Cleary adjudged his kick went wide.
Terence O'Brien had a chance to take both points for Loup from a tough '45' right out on the sideline, but he was off target.
Paul McAtamney had the ball over the bar after just 27 seconds and a brilliant Francis Kearney effort, off the outside of his right foot, doubled the Swatragh lead.
They were in rampant form and could've added a goal. The impressive Sean Kearney took a free quickly to Fintan McGurk, but after trying to go around goalkeeper Thomas Mallon and keeping his shot low, Mallon made an excellent save.
Sean Kearney added a score after a fine catch at midfield by Conor McAtamney and Swatragh were on their way to a 0-4 to 0-1 lead at the water break.
It was more of the same for the rest of the half, with Liam, James and Sean Kearney popping over points, with Conor McAtamney and Tiarnan Walsh, the latter from a super long-range effort, giving Swatragh a firm grip on the game.
Loup nearly had the ball in the net at the start of the second half. When Glenn Martin's effort came back off the post, Anthony O'Neill saw his goal attempt brilliantly tipped over by Sean McNicholl from point blank range.
Eight minute into the half a Thomas Mallon clearance was brilliantly won by Caolan Devlin, who turned out of Brian Diamond's path. After racing goalwards, Caolan laid off to his brother Ciaran who finished to the net.
Mick and Paul McVey scored points for a Loup side that began to come into the game. Then, just before the water break, Swatragh engineered a goal chance . Sean Kearney's perfect pass found Conor McAtamney who was  denied by Mallon, who also saved the rebound before Sean Martin Quinn finished to the net for a 1-11 to 1-7 lead.
With eight minutes to go, Loup got themselves back into the game. A fine move involving Aidan McAlynn and Jason Rocks had Anthony O'Neill in on goal where he was dragged to the ground by goalkeeper McNicholl who escaped without a black card. Up stepped Ciaran Devlin for his second goal of the day and fourth of the season.
The wind seemed to pick up and made it even more difficult for Swatragh to work the ball out against a hard working Loup attack.
Still trailing by a point, Paudi McAlynn did well to keep possession long enough for Paul McVey to cut inside the Swatragh cover and set Anthony O'Neill up for the equaliser.