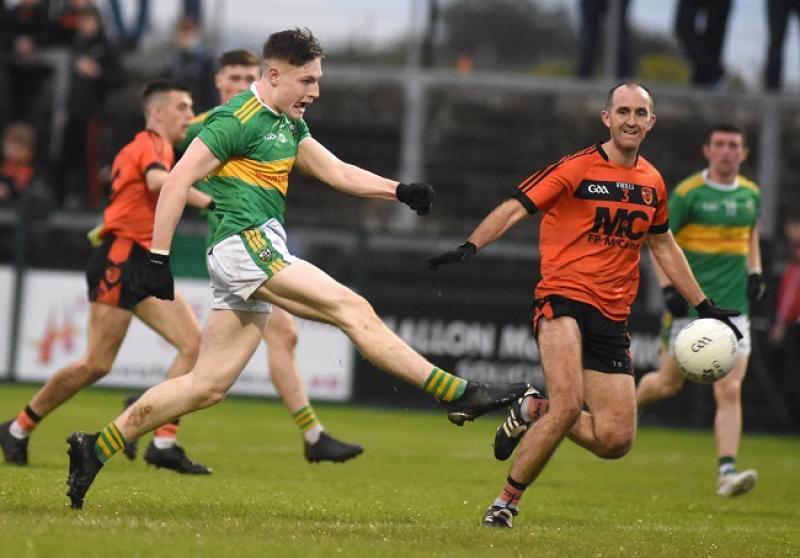 Glen 2-16
Swatragh 3-7
An in-control Glen withstood two late goals at home to Swatragh to move into second place in the league.

Sean Kearney came on at half time and bagged a late penalty and when Glen lost their kick-out a direct ball saw Kearney in on goal to fire home a second goal.

James Kearney opened the scoring with a free, but it was Glen who took advantage of space to dominate their kick-outs.

Alex Doherty, Paul Gunning, Michael Warnock, Conor Convery and Conleth McGuckian rattled off points before the latter found the net for a 1-5 to 0-1 lead.

Swatragh did get a goal back later in the half.  A high ball from Brian Diamond wasn't dealt with by Connlan Bradley under pressure from Francis Kearney who poked the rebound to the net.

Glen were 1-8 to 1-3 ahead at the break.  Swatragh were more aggressive on the Glen kick-out early in the second half, but 45's from Emmett Bradley cemented the home side's dominance.

Midway through the second-half, Conleth McGuckian's pass found Emmett Bradley who finished to the net for a 2-12 to 1-4 lead and Glen were in cruise control until Sean Kearney's late goals.

In Division 1B, goals from Shea McKenna and Aaron McKee helped Castledawson to a 2-14 to 0-7 against Slaughtmanus.