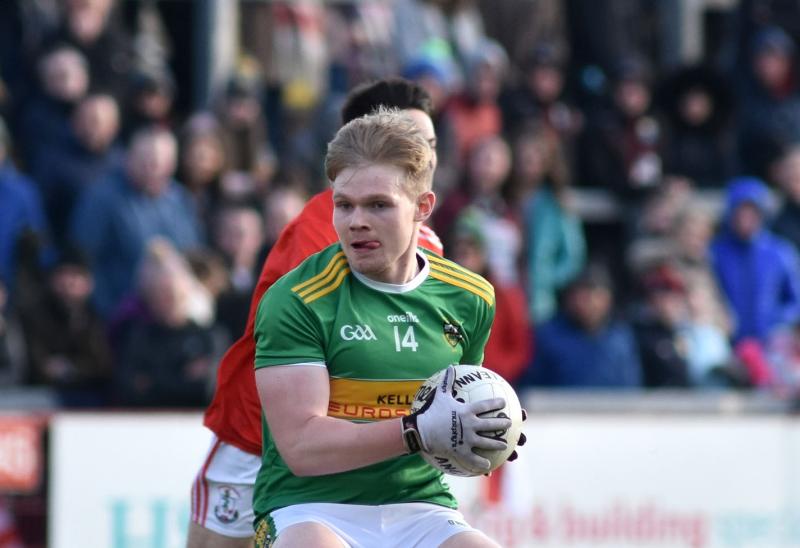 Goals either side of half-time from Paul Gunning and Alex Doherty put Glen on their way to victory at Newbridge on Sunday afternoon.

Glen 2-10
Newbridge 1-8
With the wind at their back, the home side's ability to keep the ball frustrated Glen. Paul Gunning opened the scoring, but Newbridge packed their defence, kept the ball and were very efficient on the counter-attack, with Glen unable to get their hands on the ball.

Conor McAteer was very accurate and caused the visitors some trouble. The 'Bridge went four points ahead before Gunning notched another score. A McAteer score from play at the end of the first half typified Newbridge's approach. Glen replied with points from Ryan Dougan and Danny Tallon.

As Newbridge waited for the half time whistle, Glen got one more kick-out and got a well worked goal and the sides went in level. Glen worked the ball out from goalkeeper Connlan Bradley. Tallon fed Conleth McGuckian who in turn passed to Paul Gunning who palmed to the net to leave the game level 0-7 to 1-4.

After the break, McAteer had a goal chance after a well worked move but missed the target. Glen again from Bradley's resultant kick-out, this time a long direct one, was caught by Conor Glass, who was dominant in the second-half. He released Ethan Doherty and set him straight for goal, setting his brother Alex up for the finish. This left Glen with enough cushion to see them through and their physicality around the middle gave them a platform.

The game was still played right to the end made sure of by a lovely worked goal finished superbly by Odhran McGlone with 10 minutes to play. Gunning and Tallon both converted frees before Emmett Bradley kicked over a 45.

Newbridge, who can take a lot from their performance, replied with a goal of their own. A well-worked move was finished to the net by Odhran McGlone to deduce the margin.

Glen were guilty of missing several good scoring chances however further scores from Conleth McGuckian, Emmett Bradley and Tallon closed the game out.