Derry U20 manager Paddy Bradley not looking for excuses 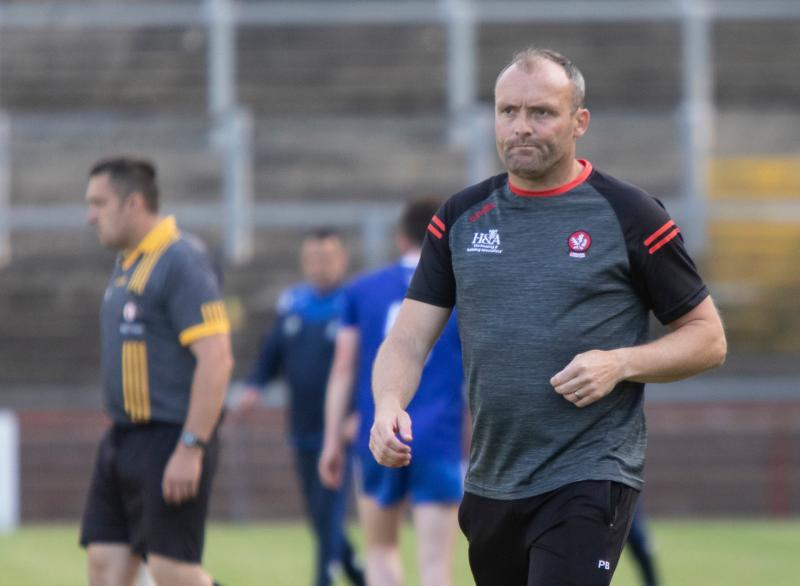 After watching his U20 Derry side go out of the Ulster Championship to Monaghan in his inaugural competitive game at the helm, Paddy Bradley cut a frustrated figure.

With no U20 league this year, Bradley relied on friendly wins against Antrim, Fermanagh and Armagh, to see what his side were capable of but ultimately friendlies don’t come close to the heat of a championship battle, particularly with a significant number of missing bodies.

“In previous years there has been an U20 league where you’ve had three or four preparation games at a fairly intense level but we didn’t have that. But everyone’s the same and we can’t use that as an excuse, but hopefully looking ahead to next year, if I am involved, hopefully the calendar gets itself sorted and the U20’s is at the time of the year it’s meant to be on, so you have a bit better preparation in the run into the championship.”

Whether it was how the calendar had worked out or the players who were missing from his matchday squad for a variety of reasons, Bradley insisted that those on the pitch had enough in them to claim a victory.

“I don’t want to blame that (missing players), but if you had your four or five minors there and Ethan (Doherty), it makes you a lot stronger. Then obviously the disruption in preparations and the few injuries, it was difficult and probably that in itself didn’t help.

“I’m sure Monaghan had disrupted preparation as well so we can’t use it as an excuse. I still felt tonight that if they had performed the way they are capable of and the way they had been the last three or four weeks that we had enough to win the game.

He continued: “In the first half we didn’t get ahead as we should have been doing with the possession and chances we had, and those couple of mistakes give them the goals and we were playing catch up from there.

“It was poor decision-making at times. Sometimes when teams set up defensively like Monaghan did, you’re maybe afraid to go at them and I thought we were ponderous in our attacks. In the last three friendlies we’ve been very good in attacking against the blanket.”

Bradley stated his belief that there was still a lot more to come from this squad, with many still qualifying for next year’s panel, and the Loup manager is hoping, should he still be involved, that it will be a very different prospect.

“You feel you’re not getting a fair crack of the whip the way it’s worked out with this competition crammed in with the seniors and minors,” Bradley explained. “It was very difficult, preparation was stop start, there was plenty of club football in there too, but I’m not going to make that excuse.

“It was enjoyable and they’re a great group of players to work with. The main thing I had said to them before the game was that I hoped they would go out and do themselves justice and unfortunately a lot of them didn’t. A lot of them are back next year so it’ll be a panel next year that’s a year wiser and I’m sure they’ll take that defeat and use it.”