Derry dig deep to grind out a victory in Roscommon 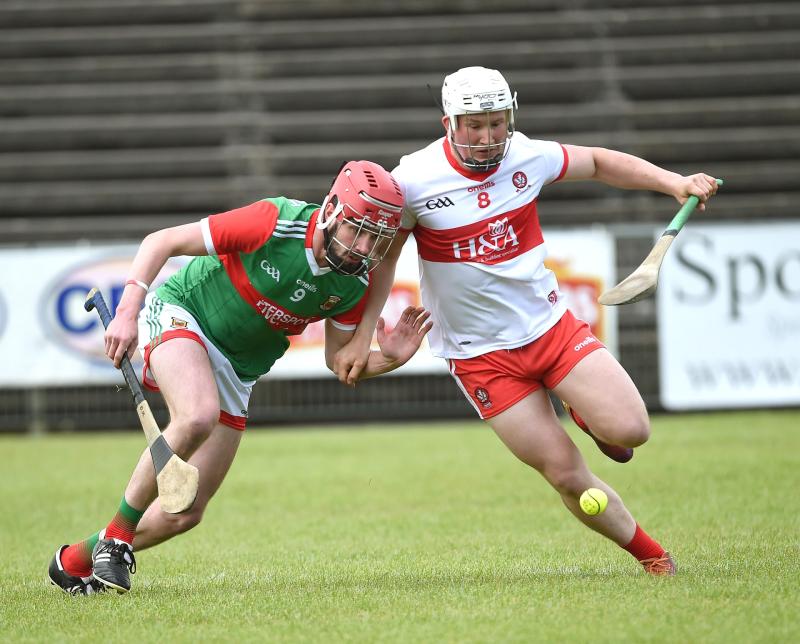 Derry narrowly overcame Roscommon on Saturday thanks to a third quarter display and sets them up for Saturday's top of the table clash at home to Wicklow.

Derry trailed 1-11 to 0-8 at the break, had Darragh McCloskey sent off early on and saw Sean Cassidy in the sin-bin in the 31st minute.

Cassidy hauled down Connell Kennelly en route to goal, but Oisín O’Doherty sprang to his right like a gazelle to deny Cathal Dolan.

Half time came at the perfect time for the visitors. It allowed them to regroup and switch Richie Mullan to defence to give them a much better shape.

Cathal Mulry, in the fifth minute of injury time, reduced the gap to a point. Roscommon had one last chance to save the game. O’Doherty was dismissed on a second booking for a foul on the right flank, but Dolan missed the chance to level matters.

It was a different Roscommon from the hammering at Owenbeg last month. To say that Roscommon were excellent during the opening half would be an understatement. From the moment Eoghan Costello emerged from a ruck of players inside the opening minute, there was very something different about a performance.

Costello, Shane Naughton and Peter Kellehan were dominating in the half-back line, while Cillian Egan and Cathal Kenny was finding pockets of space to embellish their industry and running off the ball. It also helped that Kennelly was proving to be a nuisance for Seán Cassidy on the edge of the square, with the Derry man getting on top after the break.

Derry were getting some joy from diagonal deliveries that were finding Sé McGuigan and Shea Cassidy in space but, in the main, Roscommon were getting great joy from some crucial turnovers.

Shea Cassidy opened Derry’s account, but the visitors were hit by a sucker punch in the fifth minute when Egan set up Kennelly for the game’s only goal. Soon afterwards, McCloskey saw red for an off the ball altercation with Cathal Kenny. Derry were rattled in the knowledge that this was nothing like the league game between the sides a few weeks earlier.

Sé McGuigan steadied the ship when he reacted quickest to a sideline cut that came his way before O’Doherty found the range from a ’65. McGuigan found the target once more when he took advantage of a misplaced pass out of the Roscommon defence to pare the margin back to just a point.

But Roscommon rediscovered their earlier momentum with a score from Darragh Heavey off his left side. A free from Dolan soon followed before Kenny and Odhran McKeever exchanged points to leave it 1-4 to 0-4 in the underdogs’ favour at the water break.

The second quarter made for even better viewing from a Roscommon perspective. Derry’s scores came from O’Doherty and a monstrous point from inside his own ’65 by Gerard Bradley but there was plenty of traffic going in the opposite direction too as Egan (2), Dolan (two frees), Mulry and Costello, with an exquisite effort, left Johnny Keane’s side in control, despite missing a penalty, at the break — leading by six points.

But the pendulum swung dramatically in Derry’s favour on the resumption. The introduction of Deaglan Foley and Brian Cassidy injected much-needed impetus into the Derry attack as Roscommon started to struggle in too many positions. Derry managed to close down their opponents as the earlier freedom that the home side enjoyed evaporated. Appeals for a number of frees they were entitled to were also turned down by referee Chris Mooney who had incensed Derry with a couple of decisions in the opening half.

Between the 44th and 68th minutes, all Roscommon had to show for their efforts was a Cathal Dolan free. Derry kept piling on the pressure with O’Doherty (2), Cassidy and Mark McGuigan eroding the deficit to just three points at the second-half water break.

The game’s trajectory never altered as another booming effort from Bradley was sandwiched between a couple of O’Doherty frees to bring the sides level.

Kelly’s long-range effort in the 66th minute was waved wide by an umpire, but the referee overturned the decision to award the score. Deaghlan Foley soon pointed with aplomb and Derry’s remarkable turnaround was completed.

But Roscommon weren’t finished just yet. Foley and O’Doherty swapped scores with Dolan (free), Heavey and Mulry, but Dolan couldn’t get enough power behind his last-gasp free to salvage a draw.

Late rally not enough as Derry bow out of Ulster championship