Late rally not enough as Derry bow out of Ulster championship 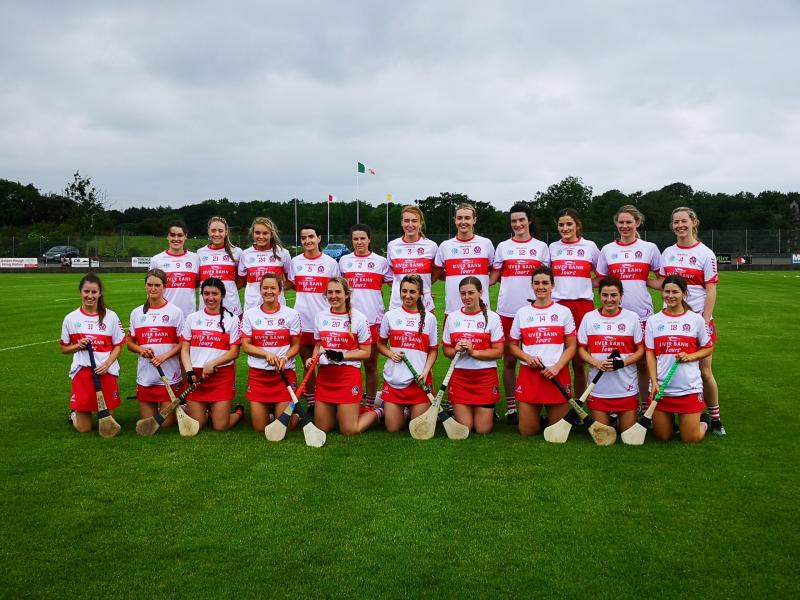 The Derry side who lost to Antrim on Saturday.

Derry camógs lost out to a Caitrín Dobbin-inspired Antrim in the Ulster senior camogie championship semi final at Loughgiel this afternoon.

The Saffron corner forward registered 1-5 from play, while Antrim hit a further 12 wides en route to a comfortable victory.

Derry had early goal chances through Clare Gunning and Dervla O'Kane, but with just a Jackie Donnelly point to show for all the pressure, the Oakleafers struggled as Antrim turned the screw in the second quarter.

By the time Eimear McGuigan notched Derry's second score on 29 minutes, Antrim led by ten points, with goals coming from Dobbin and half forward Nicole O'Neill as the Saffrons stretched their scoring muscle.

Derry started the second half well with points from Eimear McGuigan and Áine McAllister, but a 36th minute Roisín McCormick goal effectively ended the game as a contest.

The Saffrons added a further 0-3 before Derry substitute Maria Rafferty hit back on 51 minutes, but as the game ticked towards its conclusion, the visitors found a purple patch.

Further points from Rafferty and Aine McGill reduced the deficit, before Coleraine midfielder Megan Kerr rifled the ball into the top corner of Catríona Graham's net to leave the winning margin in single figures.

Karen Kielt will miss the rest of the season

The building of a tradition - The St Patrick's Maghera camogie story

How the journey to 17 Ulster titles began

St Patrick's Maghera lead the way on the Ulster Schools' camogie scene with 17 titles. Michael McMullan caught up with former coach Ann Kelly to look at the origins of their success.