All the 'Bridge scores came from play 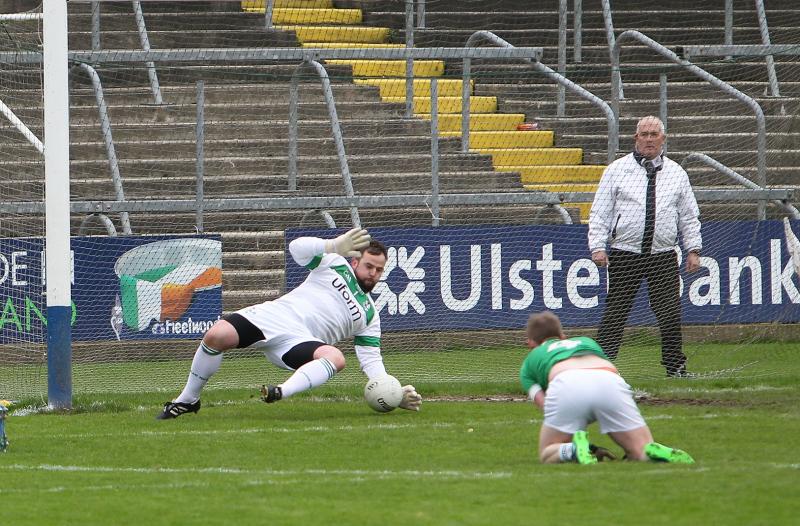 Michael O'Neill had a fine game in goals for Newbridge. (Pic: Adrian Donohoe)

A first-half goal from Danny Mulholland set Newbridge up for victory over 14-man Claudy who battled back into the game.

Shea Kerrigan was sent off, on a straight red card, for the home side five minutes into the second half, but Claudy threw caution to the wind and created two goal chances but failed to take either.

The lead changed hands early on before Newbridge led 0-3 to 0-2 at the first water break. The 'Bridge lost Lee McElhone and Jude Diamond to injury in the opening 10 minutes.

Claudy were well set up and Newbridge found it hard to break them down, with the home side hitting on break with the very impressive Oran Armstrong.

Newbridge pressure saw Claudy cough up possession that led to a 1-1 brace, Mulholland showing his skill with a soccer style finish to the net that saw the visitors lead 1-5 to 0-4 at the break.

In the second half Newbridge started brightly and scores from Odhran McGlone and Peter McGrogan kept them ahead.

Claudy played their best football when they went down a man, but weren't able to get the goals they needed to save the game. Aaron Kerrigan broke clear of the defence, but was denied by goalkeeper Michael O'Neill and Conor Johnston had a ball cleared off the line by a substitute Mickey O'Neill.

The home side can take heart from the performance and while the winning margin didn't do them justice, Newbridge were deserving winners. They were lively, executed the scores and had the ever present Mark McGrogan to rely on in front of the posts.