Lavey round off comeback to earn a draw after nightmare start 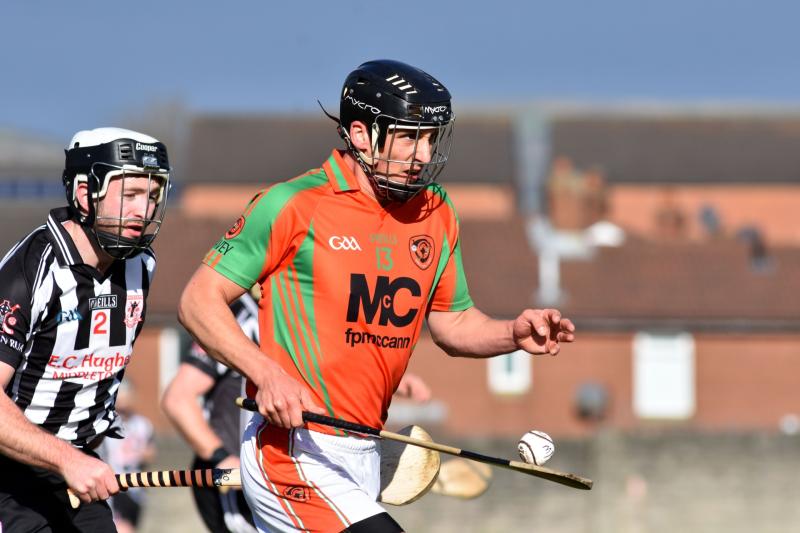 A 58th minute point from Ciaran Hendry saw Lavey earn a draw at home to Kevin Lynch's in an exciting game on Wednesday night.

The result takes Lavey to the top of the table with Kevin Lynch's, who have a game in hand, still remaining unbeaten. 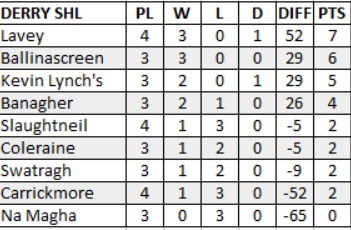 After Hendry's strike, there was still time for late drama. First, Conal Shaw had a chance to win the game and after his shot from the wing was signalled as a point by an umpire, referee Aidan McAleer overruled him.

As the seconds ticked away, Kevin Lynch's had a chance to win the game, but Sean Kelly's free tailed wide of the posts after an otherwise brilliant performance.

Both teams had their moments to win the game. Fintan Bradley was off-target from a free, with Richie Mullan twice shooting wide in the closing stages.

The game looked to be turning in Lavey's favour at the second water break when Sam Dodds' goal levelled matters.

With the Lynch's struggling in the face of an inspired home side, Darragh McGilligan added two points when sprung from the bench.

It was a draw that looked unlikely early on when Sean Kelly had the ball in the Lavey net twice in the opening 44 seconds of the game.

Straight from the throw-in, Shea McKeever played the ball to Kelly who drilled past the advancing Michael Taggart and corner back Danny Shaw. 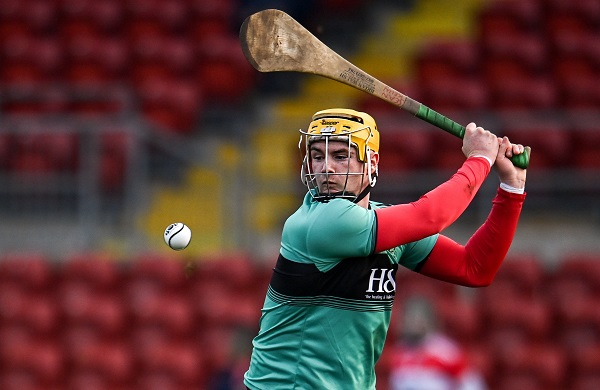 When the visitors overturned the puck-out, Conor Kelly's long delivery found its way to his brother Sean who bagged a second goal.

There was a glimmer of a third goal, but a combination of goalkeeper Taggart and one of his defenders scrambled the ball clear.

Fintan Bradley (3) and Oran Downey hit four points in a row as Lavey settled into the pattern of the game.

By the first water break, Lavey had the margin back to two points, 2-1 to 0-5, before Kevin Lynch's got to grips with the game again.

Sean Kelly fired over a monster free from inside his own 65. Lavey responded with a Brendan Laverty score directly from the puck-out, but a long range Niall Ferris point a sweet sideline cut from Thomas Brady restored a 2-4 to 0-6 lead.

Over the game, Lavey had 15 scoreable frees to Kevin Lynch's five, but many for both teams were around midfield and rated as scoreable such was the prowess of Kelly and Bradley.

Three Bradley frees left the bare minimum in the game at the break as the home side continued to take home of proceedings. They had a half chance for goal late in the half, but Jack Shaw's shot went narrowly wide of the post.

Two smashing points from play by Sean Kelly looked to have swung the game in Kevin Lynch's favour. Richie Mullan was now operating at centre forward, with Darragh McGilligan making an impact.

Lavey, who also have their reserve team playing in the Antrim leagues, used their bench to great effect. When Ryan McGill found Sam Dodds, the substitute squeezed his shot across goalkeeper McGonagle and in at the far post to level the game.

With five minutes to go, Lavey led for the only time in the game and they had corner back Danny Shaw to thank for an important interception as the visitors tried to engineer a goal.

As the game changed for the final time, two Kelly frees looked to have undone Lavey's efforts before Hendry thumped over an equaliser for a deserved draw.

For a summary the rest of Wednesdays' games click here...

There will now be a break in the league until Wednesday, July 21.