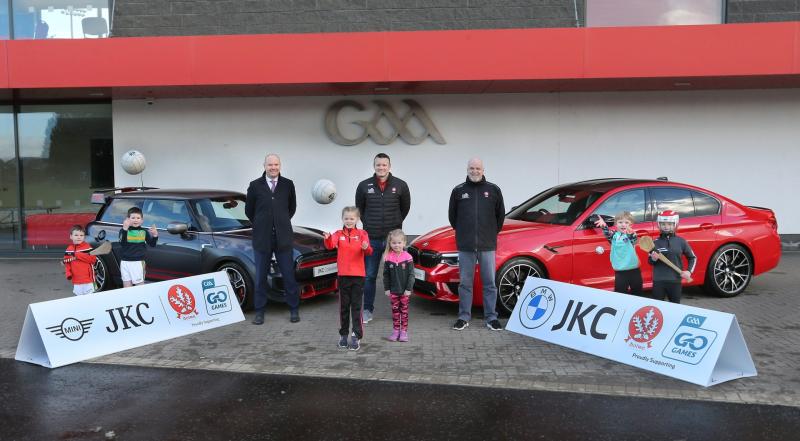 Derry GAA are 'delighted' to announce their official partner for the 2021 Go Games programme.

JKC Coleraine are back on board and Derry Chairman Stephen Barker is 'excited' to have the deal renewed.

“We never underestimate the generosity of our partners and the value they bring to our GAA community and we look forward to working with JKC in the coming months,” he commented.

"The potential for getting kids back playing on our GAA pitches is something we are also really excited about. The return to play for those younger age groups is extremely important and hopefully the 2021 Go Games will mark the beginning of the next stage in their development."

Barker also referenced the work of the county's Games Development Committee, under the lead of All-Ireland winning forward Damian Cassidy over the past few months.

“They have produced a number of coaching webinars and have brought forward a range of proposals in the recent Coaching and Development Strategy,” Barker added.

"We are always seeking to improve and evolve in order to promote and sustain all codes of Gaelic games for current and future generations."

Cassidy points out the critical areas of a young player's development. In an interview earlier in the year, he spoke of how some of the players he coached, who had high game awareness, came from a soccer background and it was important to bring this into the coaching plans in Derry.

"Go Games are the building blocks in terms of a player's development. Being able to get coaching at that young age and the structure for those foundation years (ages four, five, six) through to U13, is critical for those players' development,” he outlined.

"The key skill development is on decision-making. The ability to move the ball quickly and accurately; being able to see it and being able to execute it. That's where the emphasis on 'one-touch' comes in."

Another concept on his committee's plan was that of a 'silent sideline', where players are given space to develop their vision and decision-making, both on and off the ball.

"The other thing that is critical to progress - as we've seen from Kerry and Dublin and also coming from high performance soccer squads such as Ajax (youth academy) - is the 'silent sideline'. This is being introduced for underage games next year but we would encourage clubs to pilot that themselves this year."

"It's about allowing children to make decisions and problem-solve on the pitch by themselves, with the outcome that you'll have a better player further down the line. It might not seem significant to casual watchers, but you have coaches coaching the games and parents and spectators coaching during the game. If a young player is making decisions based on what is being put in their head from a person outside the wire, then it is not allowing them to make the correct decisions at the time. This has consequences down the line."

"The emphasis is now on embedding skills in players at a younger age. If that key component of decision-making isn't embedded at that age and developed properly, then you'll have a player who's decision-making later on isn't at the level you want it to be."

Niall MacFlynn of JKC Coleraine expressed his delight at being involved with this aspect of the association.

"JKC Coleraine are delighted to come on-board with Derry GAA as the main sponsor for the 2021 Go Games,” he commented.

“Following on from what has been a very challenging period for sport, this year’s Go Games programme has never been so important. As we look forward to a return to sport, our young players’ physical and mental well-being is of great importance, and something we are very proud to support."