Sideline View: School sport is more than a game 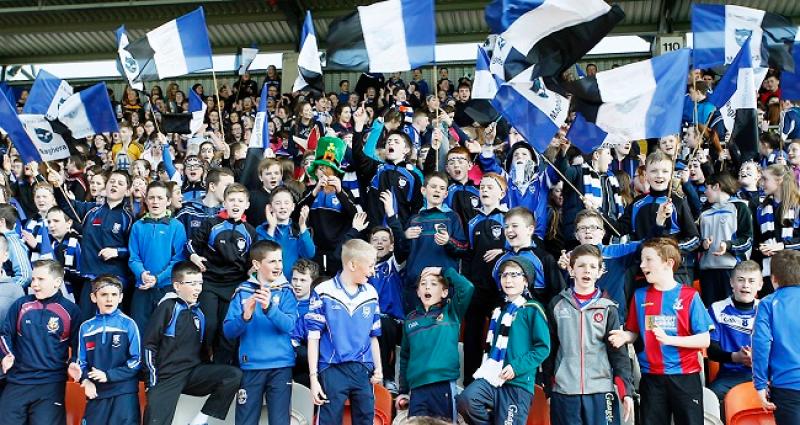 The MacRory Cup will be tucked safely away in St Colman's College Newry on Wednesday afternoon, light years away from the magic of St Paddy's Day in Armagh.

The Athletic Grounds have become the mecca of Ulster Schools' football, but for the second year in a row, St Patrick's Day didn't host the traditional schools' showpiece GAA event.

Twelve months ago, St Patrick's Maghera and St Pius Magherafelt emerged from the chasing packs to make it to the biggest day of their school lives.

As the excitement reached fever pitch in the respective seats of learning, the MacRory and MacLarnon finals were pulled in the peak of a Covid-19 scare that would dominate the past 12 months of our lives.

Cups were shared, photos were taken and seven years of school ended without the usual leavers' festivities.

When online university courses were rolled out, life moved on.

Again, the lingering pandemic has pulled another school sporting calendar to a halt.

When will we see the MacRory magic again? Micheál Glynn helped St Michael's Enniskillen to the 2019 title. He recently signed for Derry City and I spoke to him ahead of the new League of Ireland season.

His soccer career took preference ahead of a couple of appeals from 'Ricey' McMenamin to join the Fermanagh senior panel, yet his voice danced as he recalled his MacRory Cup memories.

School sport is special. And it's not all about the playing side. There is something about Paddy's Day. It never leaves you.

I still remember my first taste. As a primary school pupil I somehow found myself on a supporters' bus to the final instalment of Maghera and Colman's trilogy in 1988.

The chanting and atmosphere was electric. That's one of two things I remember about the game. The other was seeing James McCartan floor Maghera 'keeper Mickey McKeefry. For whatever reason a free in was given to Colman's and Tom Fegan stuck the ball in the net. It was a Mikey Sheehy versus Paddy Cullen moment and transformed hope to utter disappointment. But that sort of drama hooks you in.

The following year, the same two teams met in the final again, one that unfolded into legend. McCartan hit two goals inside a minute and Maghera were nine points down. His second was sensational. No other word comes close. He seemed to run the length of Coalisland pitch, then the spiritual MacRory final home, before lashing to the top corner.

Goals from Anthony Tohill and Karl Diamond (twice) still wasn't enough. This was a proper roller-coaster. McCartan weaved inside on his way to a third goal and the cup looked like heading back to Newry's Violet Hill.

Eamonn Burns was writing a different script and his three points flicked the game over the body one last time. Standing on the concrete benches that afternoon was a memory that never leaves you. It was chaos, watching two heavyweights slug it out, taking turns to claw onto the ropes.

One of Burns' late bullets was a high, curling effort from play to level the game before a free from the sideline put Maghera ahead for the only time in the game. There was time for more drama. Colman's had a chance to win the game at the death, but Michael Hall's shot pinged the outside of the far post and Maghera were home and dry, 4-10 to 4-9.

The BBC came in for intense criticism with the footage squeezed into a corner of their highlights programme that led with the Schools' Cup Rugby Final. How times have changed.

There was just something about the buzz around the whole experience. It didn't seem to matter what school it was.

St Mary's Magherafelt on their first MacRory Cup in 2017 and Armagh was awash with colour. I can still see the smile on winning captain Declan Cassidy's face. Has there ever been a more delighted winning captain?

GAA's most recent Congress has brought the All-Ireland Schools' finals forward to the weekend after St Patrick's Day. It spells a very sorry end to the MacRory and MacLarnon Finals' traditional day in the calendar.

A new home in February for the finals can see the occasions seamlessly slot into a focal point it deserves.

In the GAA's defence, I think one of the biggest faults of the MacRory Cup, one used to beat itself with, was a move to a pre-Christmas stage where nobody got knocked out.

The groups need to have an elimination element to streamline the competition. Teams would still have plenty of chances to qualify and the breathing space of being allowed an off-day.

With it finished up earlier, it will allow county minors to fit properly into the calendar. County level is a step up, but there is no better shop window than playing against the cream of other counties in the knock-out stages and the big game atmosphere that grows from the quarter final stages.

From a conversation with Éamonn Fitzmaurice last year, he spoke a lot of sense around the schools' scene. He explained how the county players did their strength and conditioning in pockets across Kerry, under the county coaches' directive.

All counties should make a link with respective school teams to make sure squads are ready to hit the ground running when the schools' competitions finish.

During my seven years at school, it brought four MacRory titles and a final defeat. St Patrick's Day was a permanent fixture. If you were sporty or just enjoyed the craic, you'd never miss a game. It was just the norm. A way of life.

Around school, there was always a buzz. Hats, flags and headbands appeared. Songs were perfected and supporters' buses were filled. All numbered and supervised to perfection.

I was lucky enough to make the squad in Upper Sixth. It was a magical year on the inside. We had some brilliant days out.

There was the traditional trip after Christmas. Myself and my Dominic Lynn stupidly left our key at Fairways Hotel reception. After dinner, we returned to find our boots and gloves in the toilet, the beds upside down and clothes everywhere. Thankfully we played in the Friday game. Kicking out a ball with a pair of wet Puma King wouldn't much craic.

Sure, it was bit of harmless fun. Danny McGrellis had Dr Hook's Millionaire song on repeat in the bus when none of the rest of us knew who it was.

On the Saturday, we played St Patrick's Tuam in the second game of the weekend and what Ger Canning later coined as a shemozzle ensued. The game (and probably the row as well) ended in a draw. Sure it was character building. It gave us someone to laugh about on the way home and gave a bit of context to the Hogan semi-final later in the season.

I think back to what seemed like endless kicking in lines across the pitch under the tutelage of Adrian McGuckin. Varying types, high, low and the 'one bounce' ball, followed by a sprint to the far sideline, where you waited your turn for a catch. And so the cycle continued. Time your jump. Eyes on the ball. Arms up like the number 11 and get your thumbs behind the ball.

It morphed into backs against forwards and full games. Twice a week. What else would you want? It had a proven track record. Basic skills and fitness levels were of the required standard.

When I think back to the days of enjoyment we had both on the pitch and on the terraces, if we had lost that for two years due to a pandemic, it would've been a travesty. In that moment, sport is your world.

Now that St Patrick's Day is lost, it's up to Ulster Schools' to battle for a new home for that magical day of colour, air horns and teams battling for a right to get both hands on the MacRory Cup.