SIDELINE VIEW: Children's sport - The days of our lives 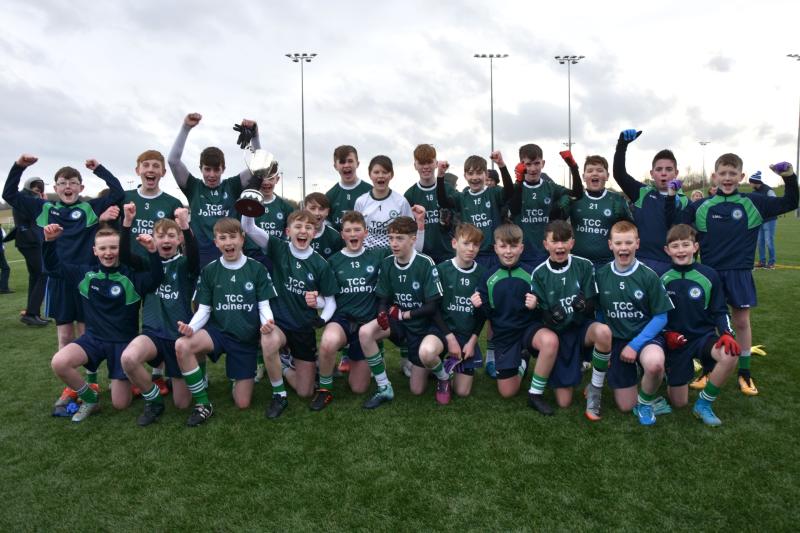 Cookstown's Mid Ulster Sports Arena (MUSA) is one of those places you learn to love and hate with equal measure.

Like Owenbeg and Tyrone's Centre of Excellence in Garvaghey, it is open to the elements. The breeze always dictates or ruins a game (depending if you win or not). Anyone not playing, needs to dress like an Eskimo heading into the Arctic Circle.

One of the best things about reporting on sport, is the avalanche of school games that dominates the calendar. With the new Ulster Schools' format and the different grades, Derry schools are always in finals.

Places like MUSA are a godsend when most grass pitches enter winter hibernation. They are not everybody's cup of tea, but where would school sport be without artificial pitches?

I remember chatting to Michael O'Callaghan of St Patrick's Dungiven three years ago before their Ennis Cup Final, an U14.5 'C' football final.

The previous year, Dungiven's failure to find the net with any regularity was their downfall. O'Callaghan, Mervin McMullan and Richard Ferris had them shooting for goals all winter at training. It paid dividends with an average of eight goals a game on the way to the final.

Seconds into a pulsating decider, Caolan Hazlett's goal set them on their way to victory over St Patrick's Dungannon. It took a superhuman display of goalkeeping from Brandon Deeney to make sure they won and the netminder was edged for man of the match by the brilliance of Hazlett.

It was one of those games where you soon forgot about the wintery gale. The endeavour and freedom of expression by two teams was all the warmth anyone needed.

We'd rip someone's arm off at the oxter to get that type of experience right now. And that's just us adults.

Covid-19 and lockdown has touched everyone's door. Families have lost loved ones, without getting a proper chance to say goodbye. For them, the world will never be the same again.

Businesses are going to the wall and people are losing their jobs. Others are being put on furlough.

For many people, routine is their friend and without it, they can be lost in a void.

The silent darkness of those fighting the daily struggle with their mental health is all the more prevalent. Too much bad news and no flicker of light.

We keep looking at how countries like Australia and New Zealand are back to normality – or close to it – and the rest of us are like lost sheep.

During the first lockdown, which is nearly a year ago, our daughter stopped me in my tracks when asked if we could have a 'Daddy day' and go for a milkshake. After it (lockdown) is all over I told her.

“When will this all be over?” was her response.  We can't really give our children an answer.

The children are not going to fare well when we get back to normal. The imprint, I feel, will last long enough to be something that needs addressed.

With no interaction with friends, cousins and anyone they meet with at sport and their various hobbies, children are being subjected to online learning, playing indoors and Zoom calls with friends.

The vital social skills that adults have developed are not being given the chance to grow among the next generation.

Getting rid of sport was a major loss to society, and I feel there needs to be some avenue for children to exercise and avail of the social benefits it offers.

In an interview for the Irish Mail on Sunday, Feargal McGill, the GAA's Director of Player, Club and Games Administration, indicated that of 70,000 youngsters who took part in the Cúl Camps during the summer, only one positive Covid-19 case was identified.

But, while our political leadership didn't bring any of the New Zealand success story to these shores in the fight against the virus, we, as a society, needed to take some ownership.

The overcrowding at club games last autumn hardly helped, with no social distancing in places. It's not as if there was no facility to watch online from the sofa.

There is some difference between playing on a pitch and standing elbow to elbow beside someone along a fence.

Then came the horror show of post-final drinking sessions, in packed indoor venues, which led to spikes in the numbers of the cases everywhere. In the interview with Philip Lanigan, McGill cites this as the main reason why the CCC in Croker yanked on the handbrake.

“We wouldn't hide behind the issues that arose from county final celebrations,” he said. “We had to pull county finals, cease activity.”

Add in packed funerals. There was also footage of football fans celebrating in groups outside a Belfast bar and rammed student houses in the Holy Lands.

And all the while, kids have been absent from sport.

You have to ask yourself what is important. For me, making sure we can get groceries from the shop and those not blessed to be able to work from home having a safe means to do so, these are key. They are non-negotiable.

But, allowing children to have recreation time is also important. I think we need to find a place for it, outdoors in a safe and structured way, or we will pay for it in the decades to come. I'm not talking about fully populating the fixture calendar, but just allowing regulated groups to get outside and active at the one venue. A controlled solace, away from screens.

With the considerable investment in coach education, mixed with common sense and advice from the various Covid-19 advisory groups, we could've had organised coaching with distance between groups.

A Sport England study outlined that under half of U16s in a survey were getting the recommended 60 minutes of exercise per day before Covid-19 struck, a number that plummeted to 19 percent and 43 percent are doing less than 30 minutes, with seven percent doing nothing. This is a major concern.

The average adult is different, we can throw on a pair of hiking boots, go on a socially distant dander up a mountain path and that's enough to float our boat. Likewise, kids need their active time.

Schools are doing a great job of outlining remote learning and staff are going the extra mile, doing everything they can to help keep children ticking over.

However, it's the pieces around the edges that often leave a lasting experience. If you ask Brandon Deeney or Caolan Hazlett what they remember about their sporting days at St Patrick's Dungiven, they'll always recall the craic on their way to winning the Ennis Cup.

Sport must find a way back into some small chunk of society. If schools are closed, clubs need to be given some scope, allowing them to pick up the pieces and cater for our children's needs.

Then, in good time, when it is safe, we can get back to a the full sporting package and windy Wednesdays at MUSA and beyond.