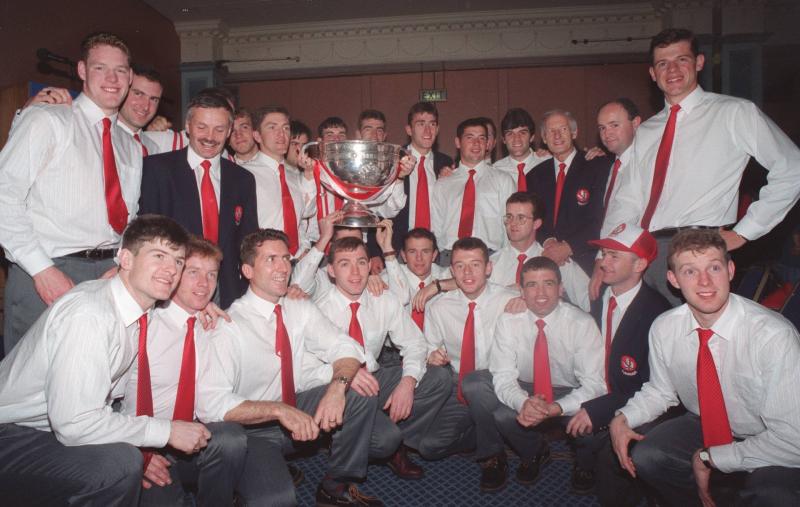 Derry celebrate with the Sam Maguire Cup at the Burlington Hotel after the 1993 All-Ireland Final (Pic: Ray McManus/Sportsfile)

Sitting down to watch the Leinster final a few weeks ago, there was the tiniest of glimmers that Meath might actually give the Dubs a game. We didn't expect Andy McEntee's men to win, but would they test the fabric of a Dublin side without Jim Gavin pulling the strings?

The answer...a big fat resounding no. By the 15th minute, most people were hunkered over their phones to vent their disgust at what Leinster had become. With 22 minutes gone, I flicked it over.

It's hard not to be in awe of Dublin. They do get dealt a more favourable hand than the rest of us, but boy do they know how to play their cards. The country scoffed at the 'Blue Wave' dossier, Dublin's 2011-2017 blueprint for dominance, but now everyone is playing catch-up. Everyone.

Getting off the sofa, I wondered how much value I would get from watching the Munster and Ulster finals the following day. Donegal were going to win three in a row and Cork were going to back up their underage resurgence with senior silverware. Or so I thought. I should've listened to the Anglo Celt's Sports Editor Paul Fitzpatrick. His beloved Cavan were a seasoned group now and Donegal were untested.

From what I watched of Tipperary, they never looked like losing to Cork. It was hard not to be overjoyed for David Power. He cut a desolate figure at Celtic Park when Derry beat them in the league, a game that should never have been played on a pitch that was unsafe and unplayable.

As regards to Cavan...their Ulster title win was so refreshing. Seeing Mickey Graham and Raymond Galligan reduced to tears during their post-game interviews was just one of those 'do you remember' moments. Let's just hope it resonates with Rory Gallagher and his youthful Derry squad as they pump iron and clock up the kilometres over the winter.

The total togetherness that Cavan showed their win was relief and joy, stirred up into something that leaves us all loving sport. It's hard to imagine anyone, not from Donegal, not having goosebumps as they watched it unfurl.

It made me think of the eighties, which spilled into the noughties. Those of us that grew up during the era, boy but we were lucky. At the time we didn't appreciate it enough.

Antrim hurlers were in an All-Ireland final, Derry minor hurlers were mixing it with the big boys. St Colman's and Maghera were feared on the Hogan Cup trail. Brian McGuigan led a Dungannon team down the same road. Behind that, St Pius were carrying national silverware up the road too, feeding into Derry's overall footballing roadmap.

Derry, Down and Tyrone were All-Ireland minor winners during this era, sometimes they only managed to get one hand on the Tom Markham Cup with narrow final defeats. But they were still clambering at the tablecloth of the GAA's top table, with Armagh being rocked at the final hurdle in that time.

UUJ, St Mary's and QUB – obviously back-boned by Ulster players – were able to topple the best of what the rest had to offer.

At different levels, the constant flow of silverware coming into the province was all feeding into the bigger picture.

Burren and Lavey carried the Kings of clubs' mantle, which added another dollop of belief into their counties as they aimed to make the biggest step of all. Bellaghy knocked that door too, Loup and Dungiven would've felt they left titles behind them. After that, came the juggernaut that was Crossmaglen.

Ballinderry's dominance of the underage saw them win All-Ireland Féile titles, with many of the players reaching the promised land in 2002, with a senior All-Ireland.

There were league titles aplenty. Plunkett Donaghy gave Derry a helping hand when he allowed an Anthony Tohill '45' to slip into the net to help secure the 1992 title. And, as Dermot Heaney pointed out to me recently, the other league titles were lost behind the glitz of Sam Maguire.

In 1991 Barry Breen's goal against Meath, who emerged from their epic four-game marathon with Dublin, shook the RTE camera in the Hogan Stand, such was the Ulster wave that was taking over.

The following year, Donegal gave Dublin a four-point hammering in the final and in the background stoked the fire even further in the bellies of Eamonn Coleman and a Derry squad used to success elsewhere. 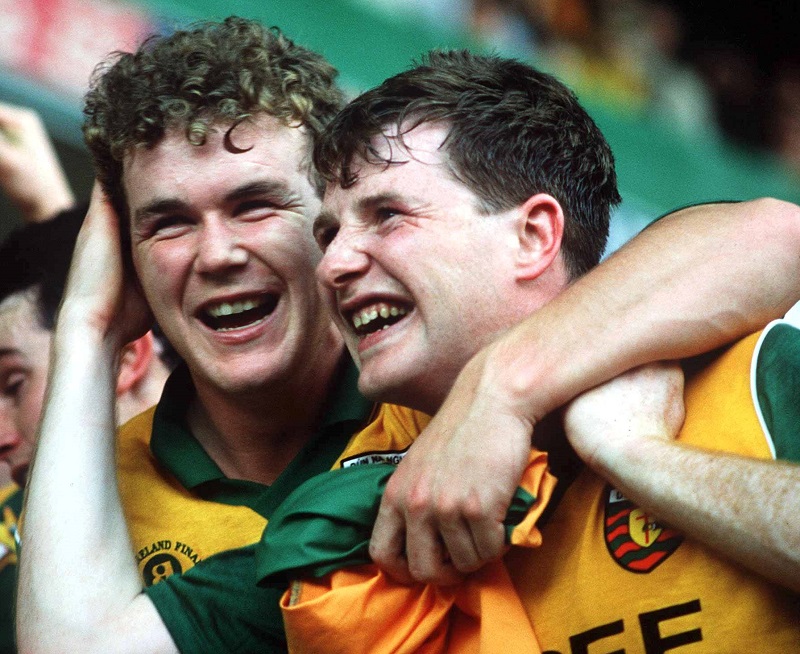 As for the Derry fan base, it was growing at a rate that the aroma of success always generates. Clubs had to hold draws for tickets. God rest Terence Madden, he was a terrific Gael. I remember him in the Derry Supporters Club shop in Maghera, at the top of Hall Street where Mickey Moran previously ran a sports shop.

Joe Clarke was also to the fore. He rarely misses a game still, at any code, and was behind bus bookings in recent seasons, trying to mobilise the dwindling Oakleafers' fan base.

Those old enough to drive, factored GAA into their social calendar. It was the holidays back then. Hotels and B&Bs were booked, nightclubs were frequented before crawling back in the wee small hours and even 'got mass' on the way to Clones.

There was the legendary Tad's Tours, Padraig Cassidy's father Pat.  In conjunction with bus driver Johnny McGuckin, a 58 seater was packed to the gills.

Destination Clones.  Destination Croker.  Destination anywhere.  The craic was mighty and in some cases (maybe more than some), Mondays at work were optional. At least, it depended what time you were home from Sunday night in Arby's.

Those were the days. When GAA was more than a game. It was a way of life. I can only assume it was a similar story in the other counties pulling at the lugs of Sam Maguire in that golden era.

As Tony Scullion famously said – with the eyes popping out of his head - in the #WeAreDerry video clip – Maghera was bleck with people, bleck...bleck, on the night the famous piece of silver crept into Derry during that famous September, in the early hours of Tuesday morning.

Down kept Sam in Ulster following year and for the best part of another decade the various corners of Ulster tasted success in some shape or form.  Tyrone put 1986 behind them to cement themselves on the map with three All-Irelands and Joe Kernan was the final piece in Armagh's masterpiece.

Raymond Galligan breaking down in tears brought it all back. From Derry's point of view, there is not the same litany of All-Ireland success behind the current group, but there are shoots of hope beginning to emerge from the wilderness.

The stark reality, in terms of league placings and our championship record, we are ranked as the eighth team in Ulster from the league, ahead of Antrim. Dublin's filleting of Meath is irrelevant. Sam Maguire isn't on the menu. We have to think of Cavan, it's time to start the climb back to Ulster's summit. That has to be the target.