Realistic Fennelly looking for “more improvements” across the Offaly hurling board 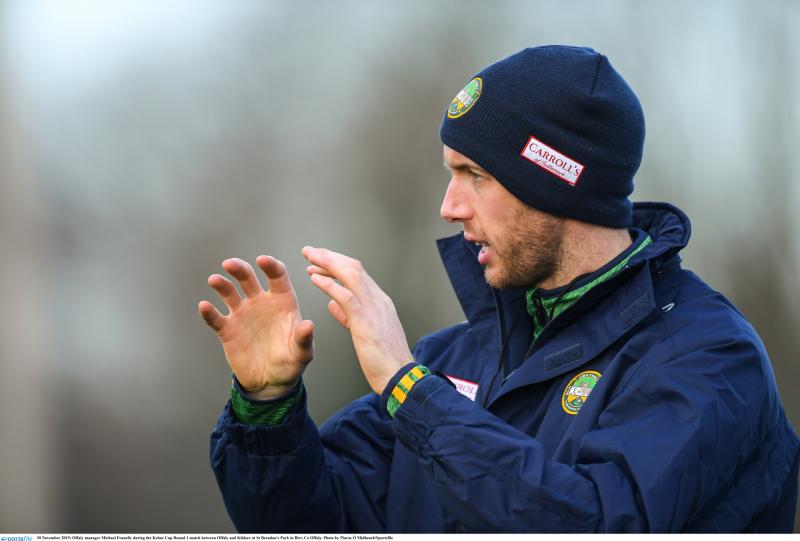 NOW that he is over a year since his appointment and has had an opportunity to fully study the Offaly hurling landscape, Michael Fennelly is under no illusions about the considerable improvements that are needed to bring the county back to former glory.

The Kilkenny folk hero was a surprise but very welcome appointment as manager last September and he is painting a positive but very realistic picture in this Covid-19 dominated year.

Now busy preparing for Saturday's Christy Ring Cup tie with Derry in Newry, Fennelly saw Covid-19 arrive uncomfortably close to their doorstep when the panel were declared as close contacts in a case involving an Offaly senior hurler.

That ruled the 27 man squad out of action for the Christy Ring Cup opener against Kildare and left them with “no option” but to concede a walkover – fortunately, a back door system was in operation for first round losers and Offaly now have no margin for error against Derry on Saturday.

Michael Fennelly was not happy that the panel were declared close contacts, remarking: “I didn't agree with that decision. We wanted to play but it was taken out of our hands. The fact is the entire session (where the affected player trained) was outdoors, that is the key. There was no relevance to any other case. Fair enough if we had been indoors for an hour but we hadn't been. It was very unusual but the day after, I was moving onto the next game and the next training session. Lads were tipping away on their own and not dwelling on it.”

Initially, there had been speculation that Offaly might still field a team against Kildare – either putting out the U-20 side who had defeated Westmeath that Wednesday night or cobbling together a panel of former players and other promising talent.

The manager did consider all options before deciding that a walkover was the only realistic and fair one. “It did cross my mind,” he admitted when asked was fielding the U-20s a possibility. “I spoke to the chairman (Michael Duignan) and U-20 management. We were looking at everything and anything but the U-20s had a hard game on the Wednesday night and it would have been highly disrespectful to put them out three days later in a seventy minute match that they hadn't trained for. They would have been up against much bigger men and it would have been very unfair to throw them under the bus.

“The fact is 27 or our players were close contacts. We could have tried to get other players in but it would have got very messy. A lot of players had not played in weeks and months. We had no choice but to forfeit. It was taken out of our hands once they were deemed close contacts.”

After their two week period of isolation ended, Offaly got back training last Wednesday and at the time of writing, had got three quality sessions under their bed. “This week will be more of a deload and trying to sharpen up for the game,” the brilliant Ballyhale Shamrocks man remarked.

The Covid case saw all the squad and back up team tested and one additional player came back positive – he is only returning to training this week and the manager is unsure if the Covid players will be able to play this weekend. Stating that one of them was “fairly bad” with the virus, he said: “We will have to see in training. I don't know how fit they will be.”

He spoke about the challenges posed by these Covid-19 times. “It is a challenge at times but it is easy if guys are highly motivated and these are. Self motivation makes the job a bit easier. There is never excuses about missing training and it is always at a high level. The attitude is very good. There are things we can't control, Covid, the weather but we are thankful to be training and playing games. Last weekend, it was great to be able to watch so many games.”

He was delighted that the senior inter-county season got the go ahead. “100%, it is about getting back to normality as much as possible. Sport is a large part of life for a lot of people. It is our national game and it is a normal part of life for many people every week. It is great to have people, older and younger people, talking about games. They are all very much enjoying the games and are thankful that it is going ahead. Fair play to Croke Park for going ahead with it.”

Offaly have not played a competitive game since the league last March and there have been changes to the panel – Belmont's Mark Egan (injury) and Leon Fox (work commitments) and St Rynagh's Sean Dolan (work and personal reasons) have left the panel but Seir Kieran's Adrian Hynes, Kinnitty's Paddy Delaney and Clodiagh Gaels' Joey Kinahan have been new additions after impressing during the club championship.

He explained: “The panel is evolving the whole time. A few players have slipped away because of work or family life. That is par for the inter-county scene. There is a huge commitment and demand on lads there.”

A 1.30pm Saturday fixture in Newry is not ideal but Fennelly is happy to play whatever hand they are dealt. “It is not ideal but it is what it is. Once the game starts, we will get going quickly. It is good that it is not later in the day and we will be home earlier. It is not too bad. We will have to figure the logistics out of when and where to have breakfast and a bit of lunch. It is two and a half hours of travel which is difficult but we are happy to be playing and to drive to wherever we have to.”

He knows that most observers expect Offaly to win the Christy Ring Cup. “People might say Offaly are favourites but we don't know what way we are going. Dublin and Kilkenny epitomised that. Dublin came back at Kilkenny and nearly caught them. There are no certainties in sport, which is the beauty of it.”

He is also aware that very few of the Offaly hurling team will have played in Newry before. “It is a tight pitch, a football pitch. I played there myself against Slaughtneil last year and that was my first and only time playing there.”

Having drawn with Antrim and lost narrowly to Kerry in Division 2A of the National Hurling League, he believes that Offaly are well capable of competing in the Joe McDonagh Cup. “That is a positive. Antrim have improved dramatically from last year. It is a good baseline or benchmark for us. We still have plenty of improvement to make. We have the capacity to do more. It is to get time and to get them hurling at a high level that I am looking for. Clubs and underage are the key to improvement.”

Offaly supporters were encouraged by recent wins for the county minor and U-20 hurlers against Laois and Westmeath. “It gave the senior lads a lift to see them winning those games. Offaly have had a hard period in all grades but the U-20s had a bit of success last year. We are trying to build, to focus on the positive things but the results are key for us over the coming weeks. The big one is Derry, they are physically sttrong and their footballers are gone now so they might have footballers coming back in.”

He got to see a few of the Offaly club championship games and watched recordings of others. “It was good to see players playing. I am a lot more familiar with clubs and players now and it was great to see them playing three-four games. It was a great opportunity for them to showcase what they were about and we got to see how they are playing.”

While Fennelly enjoyed the games he saw, he was certainly not making any big statements about the quality of them. “The standard is okay. It can be improved to be honest and it needs to be improved. The underage is where it needs to come from, the minors and U-20s. We need a bigger cohort of players coming through. We are looking for more improvements. That will be a sign that things are coming good. Michael Duignan has a vision, he wants to invest is schools and put more resources in there which is great.”