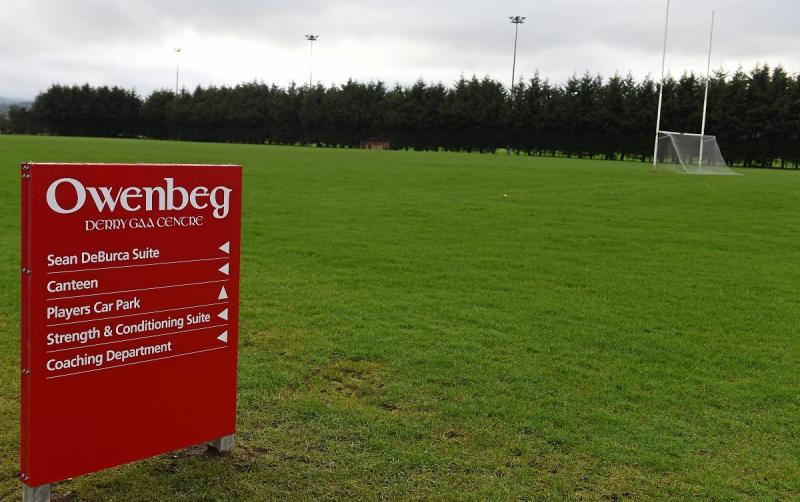 Over the holidays, my daughter was making out her Santa list and browsing through catalogues for ideas.

Lego, Barbie and LOL dolls are all in vogue at the minute. Thankfully the bearded one is classed as an essential service.

For Derry Gaels, if they are like me, we want one thing – consistency.

Lockdown was a strange animal. In Derry, it gave Rory Gallagher a chance to press pause and take stock.

In an interview shortly after the sporting calendar shut down in March, the Belleek native spoke of how it would help Derry. I tended to agree with him.

The squad's age profile dictated a need for conditioning. With gym equipment begged and borrowed from Owenbeg, club gyms and beyond, the ball was in the players' court.

They had the time free from any heavy training schedule across the plethora of teams elite players are stretched between.

It was their Rocky IV moment – player versus desire.

Ollie Cummings began the project, but his monstrous new gym, that is nearing completion by the day, the baton has been handed on to former Tyrone player Peter Hughes.

Gallagher has applauded his input, but while the Derry players' body composition needs to change, the personnel needs to stay the same.

If there is ever going to be an upward curve towards Division 1 and having their tassels tied to the Anglo Celt Cup, we have to stop changing the team at rate we are.  Year in and year out it happens.

My letter to Santa asks for one of his elves to take a crowbar to Owenbeg and wedge it under the revolving door. Whoever is in, is there for the long haul. Whoever is not, then...well, they are not.

The raft of minor teams since the 2015 winning crop has assembled enough players to build a foundation on.

Success breeds success and those young players following in the production line have something to follow.

Yes, there will be the odd late bolter picked up from club action. They too deserve a crack. It's not all about underage. Everyone has a different path. Ask all-star defender Kevin McCloy about his.

Aside from an All-Ireland final appearance in 2007, Derry minors underachieved for 13 years until Damian McErlain got the county back on the map. From looking over Donegal and Tyrone's shoulders, to shoving them out of the road on the way to Clones every July.

At senior level, we need to be doing the same. But, it won't come until we get some sort of continuity.

In the last five seasons 38 players have started for Derry in the Ulster senior championship, using 56 in total. That's just five games.

In the same time frame, counting the first round only to give something tantamount to compare it with, Tyrone (43), Donegal (43) and Monaghan (32) have used less.

In that five-year period, Monaghan have been a constant in Division 1, used the least players and only Rory Beggan has worn the number one jersey. Shaun Patton has taken over from Mark McGinley between the posts for Donegal.

Tyrone and Donegal have had a season each out of the top league, but have won the last four Ulster titles. Apart from Mickey O'Neill in their 2016 win over Derry, Tyrone have had Niall Morgan in goals. In five years, Odhrán Lynch has been Derry's third championship goalkeeper.

Geographically Tyrone and Donegal, Ulster's big two, have an advantage. In their catchment area, they have more clubs to pick county standard players from.

One of Derry's biggest problems is how players don't commit to the county for the long haul. And it's not because of club rivalry.

A summer in the US will attract some, others will be swayed by an element in their club to jack in the county as they are not getting game time. There will be other commitments that will come along.

I spoke to a former county player a few years ago and we discussed how the spine of Derry's team of the 1990s rarely changed. For the past decade, you'd hardly be able to name it.

It has to stop and with the talent coming along, now is the time. Not next year, not the year after – now.

How can you build up a fitness level to play at an elite level, when the squad keeps changing? A team spirit doesn't turn on like a tap. Analysis software won't develop a kick-out strategy – the single most important factor in the game.

It takes the same goalkeeper, defenders and manager. And it takes time to ingrain. A system of play doesn't jump off a whiteboard, it needs seasons to embed.

Now that Owenbeg is paid for, Derry GAA is debt free and there is no need for any more investment in infrastructure, it is time to invest time totally into the county teams. But players and their clubs have to commit to it.

Club rivalry is always wheeled out as being a barrier. Nonsense. Lavey and Dungiven were at loggerheads in the 1990s, but when the Oakleaf jersey went on they were all Derry men to the hilt.

Loup, Ballinderry and Bellaghy were the same in the noughties. Now it is Glen and Slaughtneil. When you scratch the surface, by and large players get on well.

Looking forward, Shane McGuigan, Paudi McGrogan, Conor Glass, Conor McCluskey and Niall Keenan. Some of the best players to have represented the county at minor level. Aside from their talent, they have a mentality to go with it.

Imagine Alex Doherty, Paul Cassidy, Calum and Matthew Downey coming along to jockey their way into a permanent spot in the Derry attack in years to come.

This is where Derry is at. The development before now is about creating roots for the future Oaks.  But, it won't matter one damn, if young guns are coming in an ever-changing team.

I just hope that when the elves arrive at Owenbeg next month, they will find that all of the current Derry squad are still on the inside (not literally of course). And the next generation are looking over the gates wanting to be part of the action.