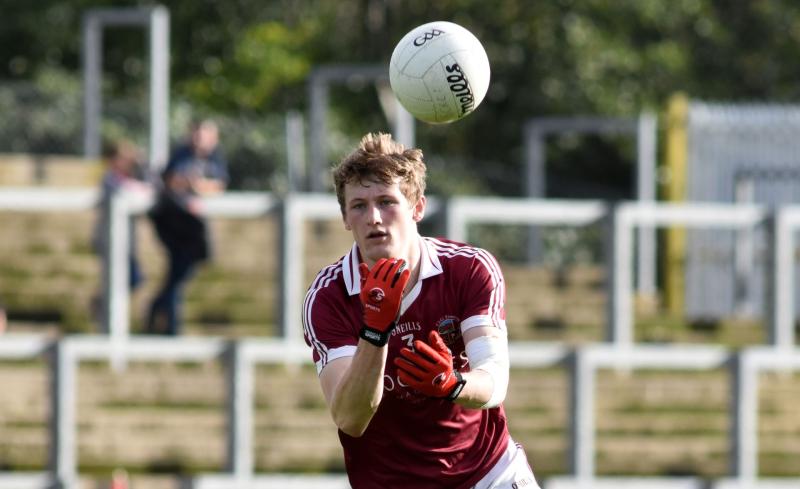 Last Monday's ticket allocation didn't stand a chance. They were gone in seconds. Glen and Slaughtneil is always a star attraction. Last year's blockbuster drove the interest in Sunday's clash through the roof.

Every time Glen attacked, they looked like scoring and with every whippet Jude Donnelly sprang from the bench, the more dangerous an animal they became.

With Brendan Rogers away from goal, with Chrissy McKaigue at wing back and Patsy Bradley like a bull tied at the side of the pitch, mad for action, it left Slaughtneil wide open.  They were both ruthless and dangerous.

And for all their action, they needed Oran McGill and Emmet Bradley to claw to balls off the line. It was like Slaughtneil taking down Kevin Lynch's in the 2013 hurling championship, Glen were on a mission. It was time to stop tiptoeing around the edges of the action. By hook or by crook, it was time to join the party.

Nobody said it, but everyone knew the sides would meet again.

Glen were delirious. Slaughtneil were distraught. But, as the bumper crowd filed out of Owenbeg with the excitement muttering of what unravelled before their eyes, there was always the realisation it wouldn't be the last meeting.

When Alan Gunn and Rory Gallagher drew them out on the live draw, the realism hit home. El Classico was on its way back.

Also back is the entire Glen management team, with the only change seeing former outfield player Connlan Bradley preferred to Callum Mullan-Young between the posts.

There was change at Emmet Park. Paul Bradley came in as manager, their fourth since Mickey Moran's exit in early 2018. He had a very astute footballing brain at the head of Slaughtneil's attack. In management, he is inexperienced, but well-respected and he brought in Gavin Devlin as trainer, who played against Slaughtneil in an Ulster minor final at St Paul's. A team that included current player Francis McEldowney.

There was no league campaign to put his stamp on the team. It was only really Lavey's bombardment to the square that ruffled them as they otherwise strode into the last eight.

Glen came out of the blocks to blitz Magherafelt, to lay down a mini marker after last year's county final defeat. It took a late save from Bradley to prevent the champions getting a draw.

Another constant with last year, was the Emmet's having a county hurling final the previous week. The pitch was nowhere near as heavy as Owenbeg was last year, for a third game of a double header.

Paul Bradley, with the exceptions of Karl McKaigue, reports a clean bill of health. Padraig Cassidy sat out the Foreglen game after an outing against Lavey as they balance a groin injury that has dogged him since Derry's league campaign.

'Tad' will be 'hopefully okay' to go. Jerome McGuigan didn't start the hurling final, but looked sharp in the final stages.

“The county hurling final took its toll on us boys last year,” admitted Rogers in an interview with the County Derry Post after last Sunday's win over Kevin Lynch's.

He references niggles, but refused to offer it as an excuse for their defeat by Glen in last year's semi-final.

“We were poor on the day,” he admitted. “When you don't have things to recover from as much, it definitely helps and I think a lot of boys are a wee bit fresher coming into this week.”

Rogers also said that the result of last year's game is irrelevant. It's all about looking forward.

“There is nothing like a local derby test. They have been knocking around county finals and semi-finals the past few years and it gives us something exciting to look forward to,” he added. “They are the games you want to play championship for.”

In the Glen camp, Jude Donnelly has been happy with the progress of defender Conor Gallagher and Stevie O'Hara in the reserve championship. He doesn't expect to see former captain Cathal Mulholland 'playing any minutes' this weekend.

“He has been very unfortunate. Every time he has come back (from injury), he has just pulled up. He is very frustrated,” Donnelly stated.

A hamstring injury saw Ethan Doherty forced out of their win over Ballinderry and, speaking last week, Donnelly expected him to be training last weekend.

“If he had been ready, we would've got him minutes (against Kilrea). He had been struggling with a hamstring, we didn't think it was as bad as it was,” he said.

Sunday's game has the potential to be a blockbuster, between the two teams fancied to wrestle for Magherafelt's title.

The one name that will frighten Glen will be Shane McGuigan. He was black-carded at the end of last year's game, but has come back better and stronger.

Emmet Bradley was dropped back to mark James Kielt in the Kilrea game, it's hard to see the same thing happening again. It didn't last long before he was out. More than likely, they will sit Ryan Dougan back in on him.

Slaughtneil don't play with a designated sweeper.  It's hard to see Glen changing their tact.  It would play into Slaughtneil's hands of having Francis McEldowney or Chrissy McKaigue free. The Emmet's operate best when Rogers is at number three and Chrissy is sitting in the pocket.

Rogers, who matched Glen's win over Kilrea from Glenullin stand, will more than likely pick up Alex Doherty, with Paul McNeill assigned to Paul Gunning. Conor McAllister could be the man to follow Conleth McGuckin on his expected tour of Celtic Park. Keelan Feeney would pick up Danny Tallon but not at full back like last season.

At the other end, Oran McGill and Oisin Hegarty will have huge battles with 'Sammy' Bradley and Brian Cassidy.

At midfield, Paudie McGuigan and Conor McDevitt should pair up, but it is elsewhere that Glen can ask questions. Francis McEldowney may be the oldest player on the team, but his engine shows no sign of weakness. Glen will be asking how match fit are Padraig Cassidy and Patsy Bradley.

Jack Doherty could be put to centre forward to ensure Chrissy McKaigue doesn't get a free ride at dictating the game. It leaves McFaul and Emmet Bradley against 'Tad' and Patsy. Herein lies the winning or losing of the game.

If Glen have potential to make gains here, their defence will have serious questions to answer against Shane McGuigan and co.

One of the unspoken match-ups will be how in the hell stewards are supposed to stop people from going to the most eagerly awaited rematch in years.

It's the third meeting of the clubs in four years. Slaughtneil lead 2-1 in terms of results. Hurt can never be underestimated in sport and while Slaughtneil would've been stewing all winter, it won't kick the ball over the bar.

Glen are most potent attacking unit they have faced.  But if they can form a spine down the centre and tighten up enough from last year, they'll edge this one. The next question will be, when will they meet again. A rekindled rivalry is here to stay.