Goals pave the way for Greenlough in championship opener 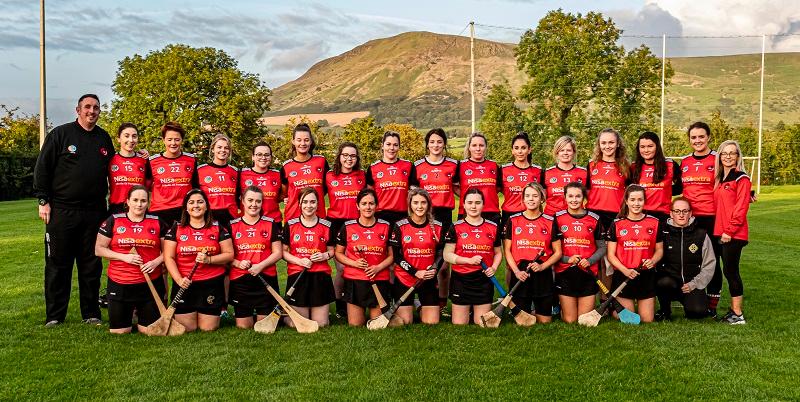 After not fielding a team in last year's championship, Greenlough are building again under new manager Gabhain Curren and they began their 2020 campaign with a winning start over Na Magha on Wednesday night.

It took the Greenlough girls 10 minutes to settle into the game. but once Maria Mullen opened the scoreline with a point from play the girls lifted their heads and battled on.

Greenlough are an extremely young team.  Shannon O'Neill, Aine O'Neill, Anna Marron and Lauren McGlinchey all played their first championship game last night, playing extremely well even after playing their own U16 game on Monday night.

Half-forward Maria Mullen had a storming game, scoring 1-4 set up lots of possibilities for the forward line consisting of another youngster, Erin Henry who scored a beautiful point from play.

Na Magha had their work cut out with the likes of Bronagh O'Neill who scored 3-5 coming on in the second half.

Aine McPeake, another young player, playing in defence covered the ground sweeping up everything that came her way.

Their sister act, Denise and  Meabh McIlvar (1.01) provided confidence in the team scoring well and  their team play was impeccable.

Na Magha battled hard in the first 15 minutes of the second half and their midfield certainly did their work dropping the balls into the back line but Aine McPeake swept them up alongside Dervla Kerr who were relentless throughout.  Greenlough await Sunday's draw for the semi-finals.

"The score line would suggest that this was a comprehensive win for Greenlough, but with only 10 minutes left on the clock the city girls had fought back and there was only five points between the sides," commented Na Magha manager Emmet McCloskey

Na Magha's midfield pairing of Meabh Clenaghan and Maria McCloskey, both still U16 and playing their first senior championship game, look like real prospects for the future.

McCloskey taking two excellent long range first half points from play. But down the home straight Greenlough showed their experience and the young Na Magha team who had competed so well for most of the game couldn’t rise again to the challenge and conceded a brace of goals and points.

Both goalkeepers pulled off several excellent saves throughout the game, the Na Magha full back line of Clare McGowan, Sophie Brady and Andrea Shepard held strong against the early attacks of Greenlough and this gave the girls confidence to play.

In attack two more senior debutants Jenny O’Brien and Katie Logue worked endlessly and were rewarded with a goal each in the second half.

"Of course all the players are disappointed about losing a championship game, but this season was about developing and bringing through young players," McCloskey added.

"This game came to soon in the development of this young city team but they will have learned a lot of what is required playing at this level and I have no doubt if they can keep them together over the next two or three years Na Magha will once again be a team to be reckoned with in the junior ranks."