Sideline View: Making your own tradition 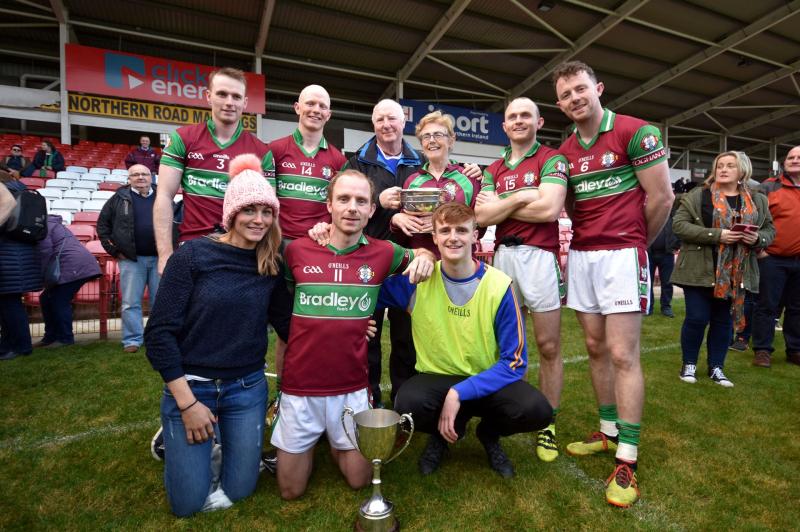 If Derry can replicate in the city what Coleraine have acheived, it will be a major step (Pic: Mary K Burke)

It didn't take Sean McGoldrick long to realise where Coleraine's rise to the top of the Derry GAA tree needed to begin from.

When he tossed a ball in the direction of his six year-old son Barry in the back garden, Barry's reaction was the watershed moment. Instead of catching the ball, he opted to put out his chest.

Soccer was his first instinct and if Coleraine were going to take the first step out of junior football, teaching the basic components, as early as possible, was the priority. Otherwise soccer was always going to have first call on the youth of the Coleraine, Portstewart and Portrush triangle.

Fast forward 11 years and Barry would develop into a wing-forward and top scorer on Derry's 2002 All-Ireland winning minor team and play at senior level for the county.

“It was a question of handling a ball, kicking it out of their hands and running with it – as opposed to dribbling it and chesting it.”

Armed with long-serving Kevin Mullan, Vinty McMahon and Brian Daly – whose son Barry scored the winning goal in the 2018 final against Lavey – Sean set to work in Dominican College. It had to start somewhere.

“It was a question of handling a ball, kicking it out of their hands and running with it – as opposed to dribbling it and chesting it,” McGoldrick said in an interview before the 2018 decider.

What Coleraine have achieved with their persistence is nothing short of magnificent. And not against a backdrop of GAA tradition in the area, but one they grew themselves. The hub of it is the McGoldrick family who have formed the spine of teams, but imagine what could be done with the numbers in Derry City. Then again there are not many people in the world like Sean McGoldrick.

This column has previously highlighted the lack of players to play senior football for Derry from outside the top flight. Of the 130 players, in the last 10 years, only 15 hail from non-senior clubs.

From the city point of view, only Neil Forester, Eoghan Concannon and Ben McCarron from the city have played for the county at senior level. That's a very sobering thought. Is all the money being invested worth it? You would have to wonder.

It is difficult to break the mould against soccer, but more recently it is a totally different issue. Many young people in the city are not involved in any sport and the once vibrant Derry and District soccer league has been struggling.

Whether we like it or not, unless the city can be properly harnessed then Derry, as a county, are always going to be fighting an uphill battle against the superpowers who are challenging for Sam.

The college scene in the county is vibrant, with teams challenging for titles on a regular basis. St Patrick's Maghera have led the way for years. St Mary's Magherafelt – while having a significant Tyrone and Antrim representation – have given Derry players a chance to play at a high level.

St Pius had qualified for the MacLarnon final. St Colm's Draperstown have been punching above their weight - despite picking from two clubs - and St Patrick's and Brigid's Claudy played in U16 finals.

In Derry City, St Columb's Derry had a strong spine of boarders on their 1965 Hogan Cup winning team. In more recent times, it has always had key players from outlying clubs Claudy and Craigbane. A worrying trend is that, apart from their MacLarnon team, the rest of the younger teams are playing at Grade C level in the new Ulster Schools' format.

A more recent development has been Cathair Dhoire, the amalgamation team in the city, which gave players in the city a taste of MacRory Cup football.

The beauty of the Ulster Schools scene is that players can play at a higher level than they are getting at their club, often at a time when their club team is idle and against players from all over Ulster. It is a great bridge to county minor level.

Any school coach I speak to, the first people they credit for success are the coaches in the feeder clubs. At the end of the day, a school just polishes the players and mould them into a team.

If, as expected, money becomes available for Derry City to follow what Dublin, and more recently Belfast, are doing then it needs to be used wisely. Every penny that becomes available should be ploughed into getting the highest standard of GAA coaching into primary schools. Not concrete or infrastructure, with Doire Trasna now having their own pitch, coaching should be the only focus.

Conrad McGuigan is a teacher in a city school and from a conversation I had with him lately, participation has never been higher. In the last six years the number of teams in the Tower Cup has risen from five to 28. He rated some of their players' skills as every bit as good as what there is in his native Craigbane and surrounding clubs. The raw material is there.

There has been a decline in the number of males going into the primary teaching profession and if principals have extra people coming in to coach GAA as a key component of the school's PE curriculum, it has to be music to their ears.

For me, the deal-breaker is accountability. To avail of the coaching, a primary school must have a link to the local club. No link, no deal. And it has to be done properly and a stringent review taken place every year. It wouldn't be hard to cross check names from the school teams with club records and eventually U14 team sheets. Any school or club not pulling their weight simply gets omitted from the funding. Money cannot be wasted on just ticking a box.

There is no point in players learning all the skills and not transferring it to a club. That's where the real gains are. A player who can push for the county minor team and have a 10 plus year club senior career. A rising tide lifts all boats and the cream will eventually creep into the senior inter-county scene.

Any new plan for the city will be the last throw of the dice at engaging a population base that could transform Derry as a county. It will take time, but unless it is properly audited there is no point.

If they can squeeze every drop of potential like Coleraine did, it would be a serious addition.