Champions sit at 9/1 to retain their title 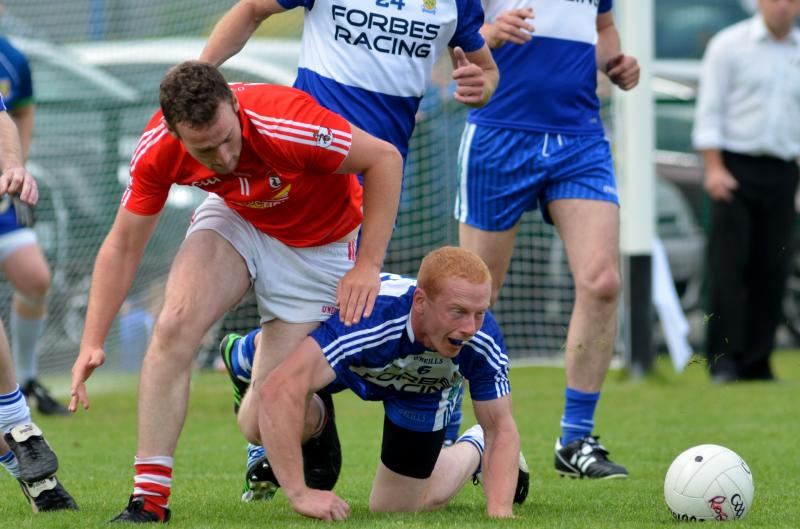 Connor Nevin and Shane Heavron in action during the 2014 meeting at the opening of Shamrock Park's new pitch (Pic: Mary K Burke)

In the midst of the Celtic Park celebrations, Adrian Cush cited a league win over Ballinderry as the turning point in their magical 2019 season, but with the title of county champions they welcome the Shamrocks to Rossa Park.

It was a year to remember for the club who also cleaned up at underage and they have since added to their squad.

Jack Barton's transfer saga from Moneymore saw him join Magherafelt. There was a return for former players Ryan Ferris and Peter Quinn, who played for Thomas Davis in last year's Dublin final.

They have a fourth addition in the form of Michael McEvoy, who missed last year's winning run with injury.

Selector Paul Quinn stated that it was difficult to get games and their meeting with Swatragh was their only outing.

Surprising Paddy Power has the champions at a staggering 9/1 to retain their title and it is something Adrian Cush will certainly use to his advantage to fire up his side to again silence the doubters.

The Shamrocks pushed Kilcoo to the pin of their collar in the Ulster league final last season and picked up momentum going into the championship before Gareth McKinless' injury ended their hopes of having a proper cut at Slaughtneil.

He is back fitter than ever, but his brother Daniel, who gave Karl McKaigue a testing time last season, hobbled off in a challenge game with Derrylaughan and Niall has ruled him out for the rest of the season.

Ironically Conway's nephew Sean Graham scored 1-3 in the game, but after being released from English soccer outfit Blackpool, he is going on trial with Crystal Palace and won't be available.

It leaves Ballinderry, famed for their attacking prowess, reliant on Ryan Bell for scores up front against a Rossa team who mastered their counter-attacking game.