SIDELINE VIEW: Losing just wasn't an option for Derry in 1993 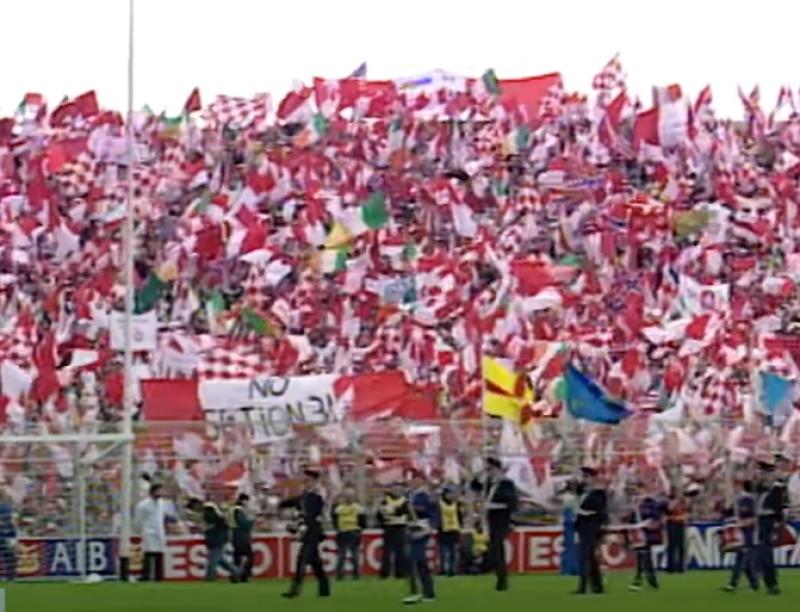 The GAA continue to deliver in the hour of need.

They can't get enough credit. The leadership didn't faff about once Leo Varadkar signalled the need for a lock-down earlier this month.

On a local level, clubs have rallied around their communities and provided direction on so many fronts.

Last week they delivered the archive of All-Ireland finals to the world. What a brilliant gesture, following on from the terrific coverage given by broadcaster TG4. Struggling with the withdrawal from sport, for those who are fanatical about it, cannot be underestimated.

Last week, it was great to take a look back at Derry's only All-Ireland title. Highlights aside, I haven't watched the final - in full - since I was at school.

Hammering Down in the first round was a statement of intent. A mauling that led Pete McGrath to admit, in the post-game interview, that Mourne fans deserved an apology. The gesture didn't sit well with the Down players.

Monaghan's Gerry Mone gave Derry a torrid time in the Ulster semi-final at Casement before Joe Brolly came from the bench to give the spark needed for victory.

The Ulster final saw Damian Cassidy gracefully skating over the puddles in Clones, in a game the Derry players were going to win, come hell or high water. It took a late block by Tony Scullion on Manus Boyle and Brian McGilligan's intervention to deny Donegal another goal chance, when they had crafted a two on one situation.

In the All-Ireland semi-final, it wasn't until Johnny McGurk's wonder pressure point that Derry would eventually rest easy against the Dubs in the season-defining clash. Anthony Tohill's outstretched arms of celebration before 'Joxer's' kick went over the bar will always stick in my mind.

The branch of the Derry Supporters' Shop at the top of Hall Street in Maghera was thronged with people in the lead-up to the final.

There was so much expectation that Sam would return on the Monday evening. In a powerful video interview with Shane Stapleton on #OurGame, Tony Scullion touched on how he felt the wave of emotion was almost 'congratulating' them as they departed for the final.

It was a Cork team that hammered a poor Mayo outfit in the semi-final, I thought. With hindsight and on watching the final, from someone outside the camp, the mental strength was Derry's greatest asset that day.

Cork had nine players who had  played in an All-Ireland senior final. They had played in five, winning two and losing twice, once after a replay. Derry, while being the upcoming team and having dispatched the 1991 and 1992 champions on their way, they were untested on the biggest day of the season.

From my position on the Hill that day, I can still see Joe Kavanagh's number 11 jersey cutting through the Derry defence before hammering past the advancing Damien McCusker.

It was the first goal Derry had conceded since June 1992, that sunny day in Castleblayney when Derry fans 'applauded' Monaghan scoring their only point of the first half. In the second half, three Farney goals had Oakleafers shaking, before getting out with a draw.

Kavanagh's goal brought me back to that day. Derry never do anything the easy way. Colin Corkery won the first two balls off Gary Coleman, John O'Driscoll beat Tony Scullion to an early possession.

Cork's running game had Derry in all sorts of trouble. Fergal P McCusker and Henry Downey couldn't get to grips with Don Davis and Joe Kavanagh respectively. When Derry eventually went on an attack, Mark O'Connor won the first battle with Seamus Downey.

Derry were 1-2 to 0-0 in arrears. Was Derry going to fail the final hurdle again? Brian McGilligan then won a vital possession at midfield. It was small, yet massive. Later in the attack Damian Barton's trademark disguised hand pass - where he looked one way and gave the ball the other - found Johnny McGurk who fired over Derry's first point of the game.

It took a series of Cork mistakes to swing the momentum. Teddy McCarthy dropped a routine pass from Niall Cahalane and McGilligan curled between the posts. The now dominant Tohill hoovered up a loose Teddy McCarthy pass before going on a storming run to win a free and Gormley slotted over.

The Oaks were now only two points in arrears and growing in confidence. McGilligan turned the screw even tighter. John Kerin's had been targetting Barry Coffey's height advantage over Johnny McGurk on his kick-outs. Across came McGilligan to win a ball he had no right to. It was inspirational.

The big man launched a pass forward that eventually found Damian Cassidy. 'Cass' swung a ball into the square. Seamus Downey made up the guts of 20 metres to take advantage of a mix-up between Kerins and O'Connor, before punching to the net.

Boom. Derry were on top. Heaney nearly beat Kerins to the ball for a further goal chance and, earlier, the Cork stopper made a brilliant save to deny Cassidy.

Then referee Tommy Howard made two wrong calls. Cahalane buried Enda Gormley off the ball and got off with just a lecture. Seconds later, Tony Davis was harshly sent off for a lazy lunge at Dermot Heaney, with Howard gesturing the use of an elbow. It was the wrong call.

The narrative was always that the punch woke Enda up. That's harsh I feel. There was very little ball directed into his corner before that. Everything went thought Brolly. However, it lit a fire and Gormley went on to score six points.

Derry twice led by three points and when Dermot McNicholl curled over, after the interval, it should've been the catalyst to push on. Brolly was toasting Brian Corcoran and should've been used more.

John O'Driscoll started the second half at wing forward, with Colin Corkery in on Tony Scullion. But when Don Davis' inch-perfect pass took out the entire Derry defence, O'Driscoll drilled to the net and Cork were ahead.

That's where the Derry resolve was again tested. And they passed. There was no sign of panic. McGurk was allocated the extra-man role. Fergal P McCusker, Henry Downey - and later McKeever – ran the show in defence. With the extra man, Damien McCusker's outfield experience saw him use short kick-outs before they were even invented.

For all their control, they failed to ask any questions of Derry's defence, but when Gormley levelled the game, the Ulster champions' superior fitness carried them into the three point lead.

Even then, Derry did it the hard way. With Steven O'Brien now at full-forward, Cork began to throw the dice for the last time.

If every the term 'getting over the line' was used, then this was all so relevant. Derry had performed better on other days during the Eamonn Coleman era, but winning was the only thing. Failure wasn't an option and they refused to be denied their moment of glory.  It was richly deserved.

It's just a pity there was no back door and that Eamonn was controversially sacked. This group had so much more to offer.