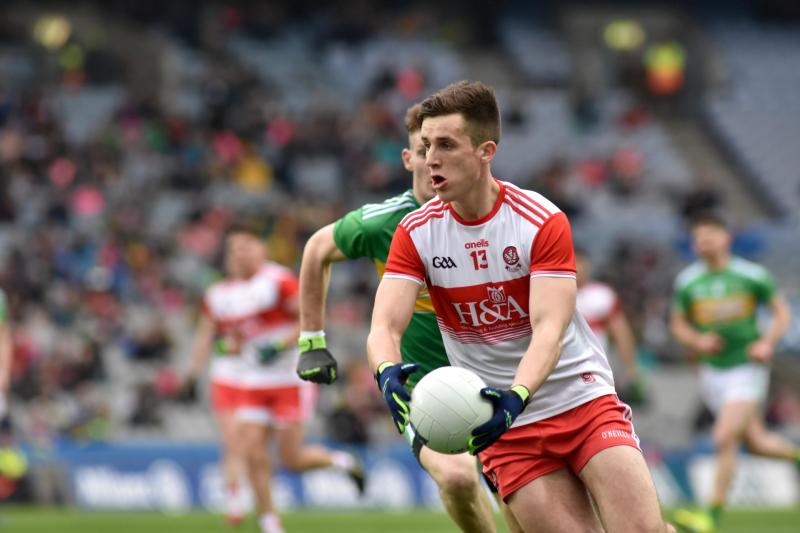 Thanks to seven points from Shane McGuigan, Derry picked up a first win of the season, and a first of Rory Gallagher's tenure, following a dour affair against 13 man Tipperary at Celtic Park on Sunday afternoon.

“I thought we were the better team by a good stretch,” Gallagher said after the game.

“In the first half we controlled the game in a very strong breeze. In the second half we weren't clinical enough. We should have been finishing that game with 1-14, 1-15 at our ease."

The build-up to the game was dominated by the state of the pitch after it was cut up by Saturday's U20 extra-time win over Fermanagh in the driving rain.

An initial pitch inspection, before nine o'clock on Sunday, was followed by a request to Croke Park, who were determined for the game to go ahead, for a second assessment.

The surface was passed playable only 80 minutes before throw-in, following the arrival from Mayo of referee Jerome Henry.

The visitors, who failed to score from play, had Daire Brennan and Steven O'Brien sent off in the second half, while defenders Alan Campbell and John Meagher spent time in the sin-bin after cynical fouls on Niall Toner and Shane McGuigan.

The conditions were far from ideal for any kind of free-flowing football but the home side failed to kill off a lacklustre Tipperary side who where within a goal in the closing stages.

Shane McGuigan notched his seventh point, his only from play, to end a 20 minute scoreless spell and seal Derry's win.

The Oakleafers played against the wind in the first half.  They suffered the wrath of referee Jerome Henry who gave the visitors some questionable frees but Derry's indiscipline saw the ball carried forward on two occasions.

Tipp had a glimmer of goal but Brian Fox's overcooked pass failed to find Kevin Fahey. At the other end, goalkeeper Comerford needed to be alert to save from a Shane McGuigan snapshot.

The Oakleafers led (0-4 to 0-3) at the break before Tipperary got on level terms with the first attack of the second half.

Frees from McGuigan and a Liam McGoldrick strike from play had Derry five points clear but even with the extra men, Derry failed to put their opponents to the sword.

Sweeney and Jack Kennedy replied for Tipp but McGuigan's point in injury time ended any chance of an upset.

Derry sit third in the table, ahead of Down and Tipperary on score difference, and will host Louth on Sunday, February 23 before making the trio to leaders Cork in round five.

READ - Give goalkeepers another option