SIDELINE VIEW: Give goalkeepers another option

We need more than strategic kick-outs 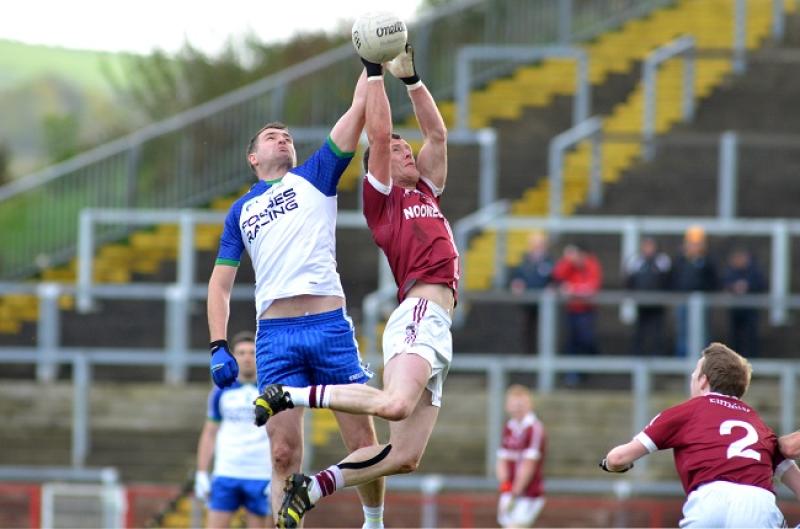 “Every step you take away from last Christmas brings you a step closer to the next.”

Those were the final words from a story I was reading with our daughter Erin last week.

The Christmasaurus by Tom Fletcher was a quirky read about a Christmas dinosaur and we both chuckled at the last line from lead character William Trundle.

It'll not be long until we'll be penning the next Santa letter and on the journey home from Newry on Saturday night, I began to think how I would word mine.

Dear Santa, can you bring me a long term plan that will provide high fetching midfielders to Derry. I have talked about it many times but now I am writing to you looking for something I think we really need and would get long term joy from. Signed, Sideline View.

I have said it over and over. There is no substitute for big mobile men in the game's engine room.

The systematic method of securing primary possession from short and strategic kick-outs is a brilliant development. I think back to watching Rory Beggan for Scotstown against Slaughtneil in Clones. Sitting behind Stephen Cluxton in Croke Park one day. The movement that goes into it must take hours. It's a craft.

Closer to home, Thomas Mallon's kicking against Leitrim in the league final last year. It too was an exhibition. People had said how quiet Michael McEvoy was that day, but the upper Hogan Stand view was a different one. The Magherafelt man's rehearsed runs were as selfless as they were vital.

The same could be said of Odhrán Lynch's ability to pick out Danny Tallon, Ciaran McFaul and Padraig Cassidy on Saturday night. It's a skill we should never throw away. The runs of Conor Feeney for Daryl McDermott's kick-outs the same.

But what happens when the spaces on the flanks begin to disappear. In the closing stages, when diesel tanks in the outfield runners begin to empty and the dashboard lights start to flash, plan B needs to kick in.

In Derry's case the worrying sign is that out and out midfielders are gone. Last year in the qualifier clash with Laois, Derry couldn't buy a ball at midfield in the crucial final quarter and bowed out of a game they had within their grasp.

The same can be said for the Leitrim game last week. Outside of Emmett Bradley pulling wide, there was no option of a leaping midfielder to pull off something magical. Niall Holly's four catches at midfield against Magherafelt in last year's championship were just a memory. Conor McAtamney put in an exhibition of fielding at Glenullin a few years back. Holly is injured and 'Macca' hasn't featured in the league.

Sean Dornan's catch on Saturday night got the loudest roar of the night in Páirc Esler. “Good man Pat,” roared Down stats man Kevin McGuigan into his ear-piece in the press box when Pat Havern earlier plucked one from the clouds.

Rory Burns got most of his kicks away cheaply early in the first half as Derry pulled the line back to midfield. As the half wore on and the Down 'keeper began to kick with more venom, the Oakleafers' hoovered up enough breaking ball to leave them in control.

Late on, despite seven wides, Derry looked like they would pull through. Then when Conor Poland scythed down Padraig Cassidy in full flight and got sent to the sin-bin, Rory Burns had only one option. And that was to enter the Neil Collins, Damien McCusker 'drive 'er as far as you can' mode from the clashes of the 1990s. Along with John O'Leary, they were the best in the business.

Derry didn't have anyone to (literally) grab hold of a game that was ebbing away without them really knowing it.

I always remember Mickey 'C' Conlan speaking of his get out clause. If he lost a pre-defined number of kick-outs in a row, Enda Muldoon was the next target. “Big Enda will always get it,” he told me.

Slaughtneil's Antóin McMullan was always able to play the Patsy Bradley card. In the Ulster final win over Kilcoo the Emmet's retained 15 kick-outs out of 15. All strategic. One year on, against Cavan Gaels' press, Patsy – almost licking his lips - was back in the ball game, plucking bullets from the sky as the route one was called again for.

Callum Mullan-Young got lambasted in certain quarters after last year's county final but when the game was in the mixer. He was left to crash and burn as Glen didn't have an out ball when Magherafelt closed the door on their plan A.

In a few weeks when I pen my letter looking for midfielders, it is a long-term project, not a one-dimensional one. More like, bringing back the forgotten skill. Let's face it, we need it.

Last week, one player with the desired leap, Conor Glass, was in Tasmania for Hawthorn's pre-season training. With us haemorrhaging his like to the AFL, we need to build a wider base.

We need to return to square one and make sure we tick box number one. Adrian McGuckin's recipe for MacRory Cup success, apart from the tough training and his before his time sport psychology, was simple two facing three.

Across the pitch, the ball started at the side with three. The ball was delivered from wing to wing. Every two minutes the directive changed. Balls to the chest, 'one bounce' balls if the pitch was in decent shape and high balls. It covered all eventualities.

“Get your arms up like the number 11,”he'd bellow, in reference to the need for outstretched arms.

“Time your run, get your leading knee up and catch the ball at the highest point,”he'd insist.

Then it would vary. Two facing two with a man in the middle for a minute of hell. Fielding high ball after high ball. Simple but unbelievably brilliant.

How many coaches are doing it any more? Most people will wrongly say it is outdated but when the game is all about possession, you can never hone this skill enough. First touch is everything.

What Derry wouldn't have done for an Enda Muldoon, a Patsy Bradley or a Fergal Doherty in the last ten minutes on Saturday night. Rory Burns would have to scratch his head a bit more and Odhrán Lynch would've been able to exploit his full repertoire.

William Trundle's Christmas list will most likely include a reunion with the Christmasaurus.

Mine is a long term plan that will provide Derry with a better selection of big, lean, mobile players to play both cards. Peel to the wings for a short and fly through the air to collect a high one above the cluster...in a manner that inspires.

Never run away from the basics.

ALSO - Players should not have to choose.