RATINGS: How the St Mary's Magherafelt players performed in their win over Monaghan

Peter McKinney was the star performer with three saves 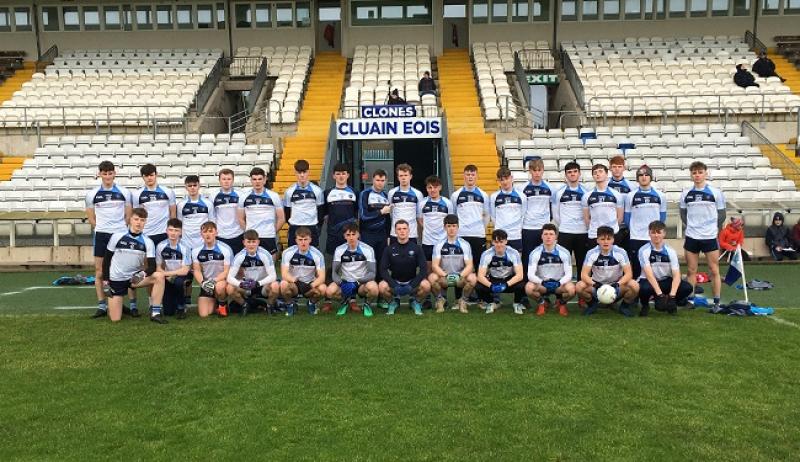 St Mary's Magherafelt booked their spot in the MacRory Quarter-Finals following their 2-12 to 0-13 win on Wednesday in Clones.

Here is a player by player look at Magherafelt's performance.

Peter McKinney – It was a third clean sheet in five competitive games and this one was well earned. His save from Tiernan Kierans was one of the main reasons why they won. His handling was top notch, he saved two earlier efforts and kicked intelligently.

Finn Diamond – Missed the win over Cavan but was a welcome returnee to the St Mary's defence. Was given the job of picking up Niall McKenna. While the Monaghan man notched three points from play, Diamond added to the Magherafelt attack with his runs forward. He played the pass for McElhennon's point.

Matthew McNeill – Went up against Lochlainn Power. He did have help from Eoin McEvoy but he held the Macartan's man scoreless. Got forward, used the ball well and was imposing in the air. Made a brilliant block to deny Power and really stepped up in extra-time.

Shea McSorley – Picked up Michael Hamill initially who mainly played deep and it left McSorley to sweep back in front of the defence if anyone else attacked. Was perfectly positioned to pick up a breaking ball from the last Monaghan high ball pumped in, hoping to engineer a late goal.

Eoin McEvoy – Played as the sweeper against the wind in the first-half to close down the space but still got forward when he could. Was positioned more in the wing back area in the second-half and had a huge role in Magherafelt's comeback including an inspirational effort when they trailed by three points.

Conleth Mallon – Gave away height to Conor McCooey before he eventually dropped off to play deeper. He had to find the balance between getting forward. Playing at wing-forward in the second-half. Saw plenty of possession, rarely wasted it and kicked an important score.

Johnny McErlain – Started at centre-back and with McEvoy behind, it allowed him to hold the middle and push forward to midfield. In extra-time, he played as the sweeper and his presence never gave Monaghan a sniff of the goal they needed to save the game. His long ball led to Kevin McNicholl's point.

POLL Who was tour man of the match?  Click here...

Aidan McCluskey – Began at wing-back on Darragh Treanor but morphed into a more central role as the game wore on. Was off target from frees but always had the courage to have a go. Never shirked the responsibility. His point levelled matters mid-way through the second-half.

Eunan Quinn – Started at midfield on Dylan Ballantine. Had a strong first-half where he won kick-outs and presented himself for the pass coming from defence. Struggled to impose himself in the second-half and was replaced with 13 minutes remaining.

Dan Higgins – He took his goal with the composure of a veteran. Only for a last ditch tackle, he could've added a second in the next play. Put himself about well at midfield and was able to get forward to add a point. He won McErlain's high ball in lead-up to McNicholl's point and set up Callum Ormsby for the clinching second goal.

Eunan McElhennon – Sliced over a classy score, into the breeze, to get the 'Convent' off the mark. He was a brilliant link man in the counter-attacking side of their game. He was always looking to get involved in the play and made an inch-perfect interception when the result hung in the balance.

Ryan McKenna – It was his kick that handed Magherafelt the passport to Clones and he once again delivered when the pressure was on. Missed a few chances and did a lot on unselfish running to get on the ball. With his teams hopes resting on his shoulders, he slotted over the 65th minute equaliser to force extra-time.

Sean Duffin – Played much of the game at wing-forward where he won a difficult possession that led to Conleth Mallon's first-half point. Found it more difficult to get on the ball in the second-half and was replaced by Callum Ormsby.

Conhuir Johnston – He may only be in Year 11 but he certainly didn't show it. Played up front with Kevin McNicholl and led the line. St Mary's began extra-time on the front foot and his confident strike put them ahead on their way to victory.

Kevin McNicholl – Lost the first two balls to Ronan Boyle but continued to show and proved to be an effective ball winner. Always took the right option, was comfortable on the ball and was rewarded with a point during Magherafelt's purple match in the final quarter.

Ryan McEldowney – Brought on for Eunan Quinn and was unlucky to miss a chance to level the game before McKenna's last gasp heroics in normal time.

Joe McVey – Played the last 10 minutes after coming in for Ronan McKenna.