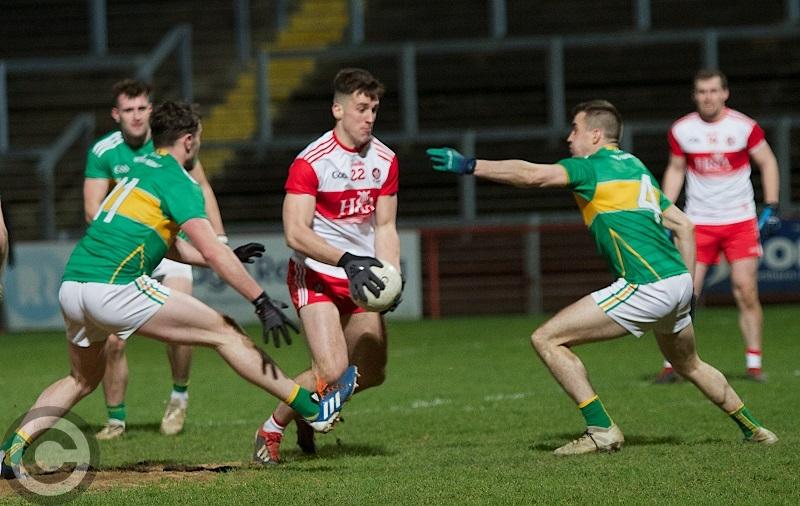 Late points from Ben McCarron and Ciaran McFaul earned Derry an unlikely draw in their opening league game of the season, against Leitrim.

Rory Gallagher's side had two chances to win the game in stoppage time. First Shane Quinn blocked down Carlus McWilliams' left-footed shot and Quinn's interception stopped Brendan Rogers' run in the last attack of the game.

In the end, a share of the spoils was as much as Derry could hope for. Barring Shane McGuigan's 47th minute goal, to level the game, they lacked the cutting edge to put Leitrim away.  All too often, they coughed up possession when on the attack.

Derry had the breeze but registered two wides and dropped two efforts short before Ciaran McFaul opened the scoring in the eighth minute.

The visitors were having great joy on the counter attack and went 0-3 up and deservedly so. Keith Beirne and Shane Moran were causing bother for Derry's defence.

In the 14th minute it got worse for Derry.  Goalkeeper Odhrán Lynch punched Domhnaill Flynn's diagonal cross down into the path of Cillian McGloin, who jinked inside before roofing a shot to the net.

Emmett Bradley and Ryan Bell hit points as Derry recovered but anytime they turned over the ball, Leitrim punished them on the break.

Liam McGoldrick and Chrissy McKaigue began to get to grips in defence and Derry began to gain confidence. Ciaran McFaul and Gavin O'Neill were influential and started to go at Leitrim.

Eoghan Duffy, who had an earlier half-chance for goal saved, tied the game before skipper McKaigue put Derry 1-8 to 1-7 ahead at the break.

Terry Hyland's men, who bounced back from a hammering to Roscommon in the FBD league, hit the first four points of the second-half.

They penned Derry into their own half and Domhnaill Flynn's long-range effort was a sign of intent, before three Keith Beirne points put them in the driving seat.

Just when Derry needed a spark, Emmett Bradley won a kick-out on the wing.  Seconds later, when Ciaran McFaul's high ball dropped in round the house, it was punched clear by goalkeeper Diarmuid McKiernan but Ryan Bell fed McGuigan who drilled to the net.

Still it was Leitrim who got themselves back in front and looked the likely winners. With a minute to go, league debutant Ben McCarron fired over a beauty before McFaul levelled the game.

Derry must pick up the pieces ahead of a trip to Páirc Esler next Saturday to play Down managed by former Oakleaf selector Paddy Tally.