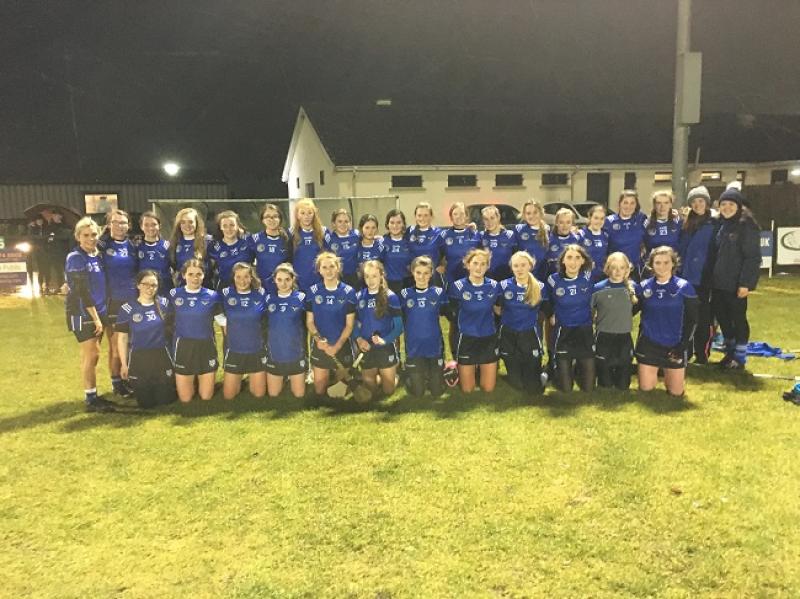 For Maghera coaches Catriona Scott and Níamh Donnelly, it's a familiar face in Friday's Ulster Senior A camogie final.

Scott was a past pupil of this week's opponents St Louis and went on to have a stellar career with Antrim, winning an All-Ireland junior title in 1997.

In the same year, she won an Ulster Club title with Loughgiel, after transferring from her native Glenravel and as a student at UUJ, she played on all three Ashbourne winning teams.

Alongside her on the sideline this weekend is current Antrim player Níamh Donnelly, who (previously)worked in the PE Department at St Louis and is now in her second year teaching in Maghera.

In another sub plot Niamh's best friend Chloe Draine is one of the St Louis coaches and Niamh will be the bridesmaid at her wedding on Easter Monday.

“Niamh is a great role model for the girls,” endorsed Scott, who coached 11 of Maghera's 16 Senior winning teams.

Scott, while jokingly not identifying who is who, points to the 'good cop, bad cop' management setup in Maghera.

“I have been there since 1998 and in the first year, we won all five titles (at the five age categories). We are the only school ever to have done that.”

In contrast St Louis hold five titles, all won in the first eight years of the competition – including a three-in-row at the turn of the 1950s.

While there is a gulf on the roll of honour, there was precious little between the teams in the group stages. After playing second fiddle for much of the game, Maghera upped the ante to grab a 1-6 to 0-7 win, recalls Scott.

“It was a very tight match and it (the final) could go any way on Friday.”

In the semi-finals, Maghera saw off St Mary's Magherafelt in a monsoon at Loup before Christmas, thanks to a player of the match performance from Bronagh McCullagh, as well as goals from Aimee Lennon and Clare Gunning.

On the other side of the draw, St Louis took out three in a row Ulster champions Cross and Passion Ballycastle, 1-9 to 1-5, with their goal coming from Caoimhe Molloy, a game that Scott saw the second-half of.

Maura Downey was accurate from frees but the Ballymena girls needed to dig deep. Trailing by a goal early in the second-half, they upped their game and outscored Ballycastle 1-5 to 0-0 in the final quarter to set-up Friday's showdown.

Maghera continued their preparations over Christmas and had a successful training weekend in Dublin recently. An overnight stay, funded by the girls themselves, came between challenge games with Kilkenny U18s and Dublin's intermediate side in Abbottstown.

“I have been at Maghera 20 years and up until recently, the last four years, I never saw a Halloween break, a Christmas break or a February break...ever,” Scott said, referencing the extra training sessions with the schools teams.

“I love it and I love the girls and I wouldn't hesitate to go in (to school for training) for them.”

There are four sets of sisters on the Maghera squad including the Ní Lochlainn (Annie and Mary) and Lennon (Aimee and Leah) twins. The others are Doireann and Éadaoin Donnelly, Katie and Eimear Doherty.

“Eimear is only a third year but she helped out if we needed extra players to play a match,” Scott pointed out.

“She was that keen, we let her stay. She is going to be the new Ceát McEldowney – she is excellent for all the age of her.”

Scott and Donnelly, barring a long-term knee injury to goalkeeper Mairead Comer, have a full hand to pick from. They are relieved Ceát and Carla McEldowney came through unscathed from Slaughtneil's training camp in Kilkenny at the weekend.

“She (Comer) is a big, big miss but Eimear (McEldowney) is doing excellent in goals. She has been doing well all year and she was superb down in the Dublin game.”

The hallmark of Maghera's semi-final win over Magherafelt was their midfield power. Ceát McEldowney and Bronagh McCullagh are a formidable pairing, with Blathnaid McLaughlin weighing in with scores from the wing. The loss of McEldowney was felt following her switch to full-back after Aisling Porter's hand injury.

They will need a huge effort against St Louis' pairing of Bronagh Laverty and Aoibhinn McCluskey. This is where the game will be decided. If Maghera can come out on top here, they have the attack to ask questions of St Louis.

In the league game, all seven of St Louis' points came from placed balls and if they can't improve on this ahead of Friday night, the Corn Uan Uladh could be Maghera bound.

PATH TO THE FINAL
League section