Champions Foreglen lead the way with their seven awards 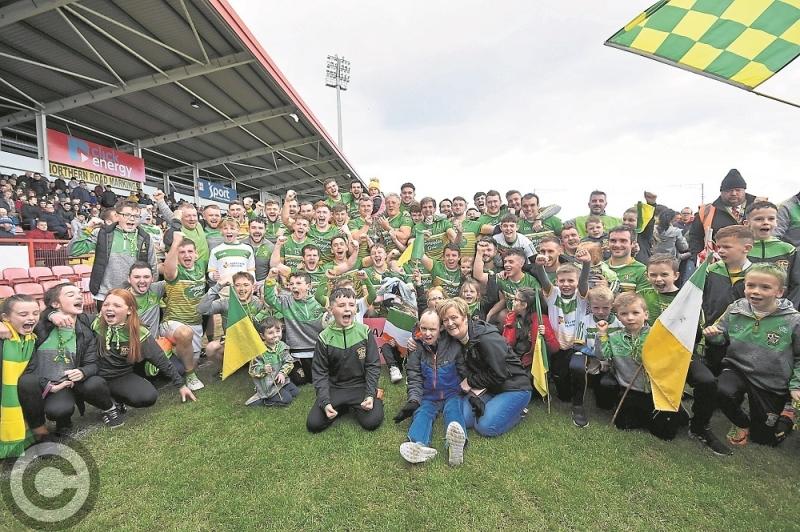 Foreglen and Claudy almost played out a championship of their own in the first round.

They needed late points and replays to see off Faughanvale and Steelstown respectively.

After a draw in the league, both teams were destined to reach the final and did so with little fuss.

Drumsurn came back from the brink to see off Ballerin and did push Claudy in the semi-final.

The final was the clash all the neutrals wanted and once they found their feet, it was Foreglen who come out on top.

In Ulster, they pushed eventual winners Magheracloone to the pin of their collar but left themselves with too much to do.

1 - Kieran Reilly
(Claudy)
Reilly produced the save of last year's championship against Loup and he repeated the feat this year.
His full length diving save denied Lissan's Shea McKernan and he got a glove to Harry Foster's shot to turn onto the bar. Both were jaw-dropping moments that backed up his confident array of kicking.
[1st All-Star]

2 - Tiarnan Woods
(Drumsurn)
The former Derry minor captain, one of Drumsurn's up and coming young guns, had a fine season.
In the opening round, he was part of a defensive unit that held Slaughtmanus to just five points.
Against Ballerin, it was his ability to open up his running game that offered Drumsurn an attacking threat from deep. Then, against Claudy he was superb, being edged for man of the match by Marty Donaghy.
[1st All-Star]

3 - Cathal O'Hara
(Foreglen)
Once they got over their blip in the opening round against the 'Vale, Foreglen's defence shut up shop and Cathal O'Hara was at the heart of it.
Despite carrying an injury, he soldiered on and was a mainstay of their run to the title. He held Aaron Kerrigan to a point from play in the final and was immense against Castledawson in the semi-final, typified by two tremendous blocks.
[1st All-Star]

4 - Niall Keenan
(Castledawson)
Burst onto the scene as the 'Dawson won the 2014 championship and the 2016 player of the year was pivotal on their way back to the semi-final stage.
After helping his side keep a clean sheet against Craigbane, he held both Dermot Breen and Adie Trainor scoreless against Desertmartin.
Despite going out to eventual winners Foreglen, Keenan helped his side to another shut-out. It seems like he has been about forever.
[3rd All-Star]

5 - Blaine Carlin
(Claudy)
With Claudy's championship hopes on rocky ground in their round one replay against Steelstown, Carlin came to his side's rescue.
An underage career as a forward gave him an eye for goal and he has been an extra attacking weapon on the wing.
When he found the net twice in quick succession, Claudy reeled Steelstown in and their rescue mission was complete.
[1st All-Star]

6 - Oisin Duffy
(Foreglen)
When Foreglen bowed out of Ulster, Ozzie's tally of 1-2 epitomised his attacking game as he tried to lead his side over the line.
Claudy had put Eoin McGahon on him in the county final, as a marker almost, but Duffy was still able to get forward.
In the Doire Trasna game he dictated their short kick-out routine, kicked three points and pulled a brilliant save from goalkeeper Durkan.
Another inspirational season.
[6th All-Star]

7 - James O'Kane
(Foreglen)
'Sally' notched his only score of the championship in the semi-final win over Castledawson, but he offered Foreglen so much more.
This was the season their unsung hero grabbed his portion of the limelight for an all-action performance in the county final. Two full length blocks inspired those around him and he flung himself on breaking ball after breaking ball.
[1st All-Star]

8 - Mark McCormick
(Foreglen)
He was selected twice earlier in the decade and put in a seismic shift as Foreglen title took the title.
His penalty began their redemption against Faughanvale in the drawn game. He amassed 2-7 over the championship, including two equalisers during the course of the final before Foreglen eventually broke Claudy's resolve.
[3rd All-Star]

9 - Daryl Mullan
(Drumsurn)
The battering ram, charging into opposing defences and with an eye for goal.
After getting himself into the shape of his life, he helped lead a young side back to the semi-finals. Formed part of the wall across the middle that stifled Ballerin and it was his point that ignited the comeback. Claudy played Drumsurn a compliment by strategically by-passing him with their kick-outs.
[1st All-Star]

10 - Eoghan Duffy
(Foreglen)
His consistent championship performances caught the eye of new Derry boss Rory Gallagher.
Armed with boundless energy, he was the link between Foreglen's formidable defensive unit and their talisman Kevin O'Connor.
He was a contender for man of the match in every game and was edged out for player of the year by Marty Donaghy.
[2nd All-Star]

11 - Marty Donaghy
(Claudy)
'Nugget' may well have played his last game for Claudy but he had a sensational championship campaign, scoring 1-13 along the way.
But he offered the Mitchel's so much more. He was a constant outlet and with his trademark dummy, he was able to buy space to lead the attack.
The injury he sustained in the final all but ended his hopes of a second medal.
[2nd All-Star] - INTERMEDIATE PLAYER OF THE YEAR

12 - Sean O'Connor
(Foreglen)
O'Connor delivered when the chips were down, the man for all occasions.
He was an effective half-forward but was called back into defence as their championship race heated up. After Shane Duffy's injury, he kept Aidan Keenan quiet in the semi-final. In the final, he was moved back onto the rampant Oran Armstrong to help put a lid on Claudy's attacking threat.
[2nd All-Star]

13 - Aaron Kerrigan
(Claudy)
Gets the nod ahead of Oran Armstrong due to his red card in the Steelstown drawn game.
Kerrigan's late free earned Claudy a replay and with three goals to his name, Kerrigan pushed Kevin O'Connor for top-scorer. His precise pass put his brother Shea through to win a penalty against Drumsurn which Aaron tucked to the net to put Claudy on their way to the final.
[3rd All-Star]

14 - Kevin O'Connor
(Foreglen)
With 1-29 to his name, he is the top scorer all three football championships.
He bagged 1-6 in their draw with Faughanvale and it was his defence-splitting pass that set-up Kevin Dunne for his goal in the replay. Handed rookie Callum McElhinney a baptism of fire in the county final and was unerring in their defeat to Magheracloone.
No better man to lift the cup.
[3rd All-Star]

15 - Gary Keane
(Ballerin)
One of the most gifted forwards in the county and a real finisher.
He notched 0-6 as Ballerin turned the tables on Ballymaguigan in round one and it was his inch-perfect pass that played Paul Ferris in for his goal.
In the quarter-final against Drumsurn, he had the ball in the net twice in the opening half.
But when Ballerin's midfield were outplayed after the break, Keane's influence waned and they missed him.
[3rd All-Star]