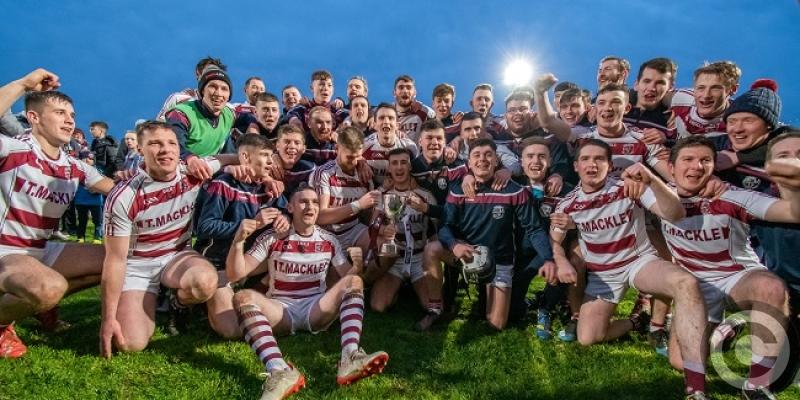 For the seventh season in a row the Fr Collins Cup headed for the slopes of Carntogher as Slaughtneil remained at the pinnacle of Derry hurling after another titanic battle with Kevin Lynch's.

They have also been the standard bearers in Ulster and a commanding display against Antrim champions Dunloy saw them lift a third Ulster title.

Derry CCC's reformatted structure has breathed a new lease of life into intermediate and junior hurling. Banagher were intermediate champions but, like Lavey and Swatragh before them, they fell short in their Ulster campaign.

At junior level, Coleraine were back as champions and romped to Ulster success and join Slaughtneil in the quest for All-Ireland glory next month.

1 – Daryl McDermott (Banagher)
One of the biggest surprises was the fact 'Sticks' has yet to pick up a hurling All-Star, after being selected in the intermediate football team last year. Cool, calm and collected (is an understatement), his puck-outs were the launchpad for Banagher's attacks. Had a slip in their Ulster clash with Naomh Éanna but flawless otherwise and will surely be highly sought out by both John McEvoy and Rory Gallagher. Oisin O'Doherty is more than a worthy mention for his Ulster final performance against Dunloy on his comeback.
[1st All-Star]

2 – Karl McKaigue (Slaughtneil)
The Emmet's defender missed out on last year's selection but is back to his consistent best. When Ryan Farren scored an early point for Lavey, he was moved across on him and blotted him out. In the final, he was briefed to pick up Niall Ferris and did so with little fuss. He helped keep Middletown to a mere eight points but it was in the Ulster final where he really earned his stripes with an expert shackling of Dunloy's Conal Cunning.
[6th All-Star]

3 – Paddy Kelly (Kevin Lynch's)
It's a first award since 2014 for the experienced defender who had a selection in the forwards in 2009. He was a vital cog in Derry's defence under John McEvoy and carried his form into club action. Against Ballinascreen in the semi-final, he held Ryan Scullion scoreless. In the final against Slaughtneil he played a captain's part. He held Sé McGuigan scoreless, was immense, repelled attacks and was unlucky to end up on the losing team.
[4th All-Star]

4 - Pearse Dallas (Coleraine)
A first award for the Eoghan Rua defender who caught the eye on their way back to the All-Ireland stage.
Of their five championship games, they have shipped just one goal and Dallas has been pivotal to that record. He had a fine outing against Na Magha and hasn't put a foot wrong since, excelling in the Ulster final against Newry Shamrocks – his side’s toughest test to date.
[1st All-Star]

5 – Eamon McGill (Lavey)
For the second year in a row, Lavey have negotiated the opening round of the senior championship and McGill has been the central figure. Despite defeat to Slaughtneil, he powered his way forward to score Lavey's goal.
He gets the spot ahead of Mark Lynch, who he edged for man of the match against Banagher. Lavey trailed by seven points but McGill's goal led the fightback. When the Feeny men chased the game late on, he was back winning breaking ball in Lavey's defence.
[2nd All-Star]

6 – Shane McGuigan (Slaughtneil)
After being handed a debut by Michael McShane in the 2015 Ulster final defeat to Cushendall, he has been an ever-present in Slaughtneil's defence. In a defensive unit that's all about match-ups, he went up against Keelan Molloy in their win over Dunloy. Molloy scored 1-13 from play during the season but McGuigan blotted him out and was still able to operate at centre-back. Richie Mullan didn't score from play off him in the county final either.
[4th All-Star]

7 – Meehaul McGrath (Slaughtneil)
Played at centre-forward as a runner under Collie McGurk for Derry and also had spells up front for his club. In the absence of Paul McNeill, McGrath has been shifted back and in his role at wing-back he enjoyed a great season. He kept Corey O'Reilly to a point from play in the county final. Against Dunloy, he was paired with the strong running and direct Nigel Elliott. He made a goal saving intervention, cut out a dangerous diagonal ball and floated over a point of his own.
[2nd All-Star]

LISTEN - Michael McShane happy for Slaughtneil to silence the doubters...

8 – Chrissy McKaigue (Slaughtneil)
The most decorated player since these awards began, McKaigue picks up a ninth award. In Slaughtneil's cause, he leads and everyone follows. He lashed over four points in their facile win over Lavey and in the county final, he shaded a war of attrition against Thomas Brady but he saved his best for last. Once again he was tasked with putting Paul Shiels on the back foot and he did just that with a surging run in the opening moments that set the tone.
[9th All-Star]

9 – Gerald Bradley (Slaughtneil)
Was hurler of the year in 2013 and followed suit this season. He registered 1-4 against Lavey, including the goal that broke them. In the final, it was Bradley who would pop up to win possession after a Kevin Lynch's score. Ballycran didn't play a sweeper against Dunloy but when McShane dropped Bradley back there for the final, his aerial ability and positional sense set them up. Then, of course, there was his monster score to cement his side's early control.
[4th All-Star and Hurler of the Year]

10 – Sean Leo McGoldrick (Coleraine)
A first award for McGoldrick who has been Coleraine's ray of light on their march to the All-Ireland semi-final. It took him one game more, but he matched Cormac O'Doherty's championship tally of 1-40.
Ever-accurate from frees, he offered much more and he landed a super point from out on the wing against Newry Shamrocks in the Ulster final after he had his initial shot blocked. That's the natural instinct he brings.
[1st All-Star]

11 – Cormac O'Doherty (Slaughtneil)
Still only 23, the Emmet's wizard picks up a fifth award. By his own standards, he was quiet in the Ulster final but scored the penalty he won himself. His 'duck' that allowed Gerald Bradley to float over the wonder point highlighted his awareness. He scored 0-16 as they downed Kevin Lynch's but it's the overall link play that sets him apart. He floats between wing and centre forward, while also popping up behind midfield.
[5th All-Star]

12 – Brendan Rogers (Slaughtneil)
While making his name as a blistering inside forward, this year's campaign saw him play on the wing. It forced teams to reshuffle their plans. He was a puck-out target but still ghosted into scoring positions. His side looked in dire straits in the county final before Rogers manoeuvred his way past the converging Kevin Lynch's defence to land the crucial goal. Pulled a save out of Ryan Elliott in the Ulster final and took Kevin Molloy for three points.
[6th All-Star]

13 – Niall Ferris (Kevin Lynch's)
'Ferry' has already picked up three junior football awards in the colours of Drum. He scored in every league game to help Kevin Lynch's into the top two and clinch a semi-final spot.
They were pushed to the pin of their collar against Ballinascreen but Ferris weighed in with 1-3. His goal was fortunate but his positioning was perfect to capitalise on an error by Sean McBride to clinched the game. One of two players to score from play off Karl McKaigue.
[2nd All-Star]

14 – Tiarnán McHugh (Kevin Lynch's)
McHugh had an impressive 2018 championship. Derry manager John McEvoy liked what he saw and called the youngster into his plans. He led the Kevin Lynch's attack once again and in the final against Slaughtneil he tormented Sean Cassidy with his uncanny knack of winning possession. When Mark Craig's high ball landed in the square, his presence was enough to put off Morgan McEldowney. After half-time he crashed the sliotar to the net to put the Lynch's in the box seat.
[1st All-Star]

15 – Jerome McGuigan (Slaughtneil)
Michael McShane has a track record of putting his faith in newcomers and McGuigan paid him back with 0-8 from play across four championship games. Scored four times against Lavey to nail down his spot for their pressure-cooker final against Kevin Lynch's. Massive in stature but still has a deft first touch. He gave Dunloy a different dimension to consider and allowed the Emmet's to build a different shape to their attack with Rogers at wing-forward. Edges out Banagher's Tiarnán McCloskey.
[1st All-Star]