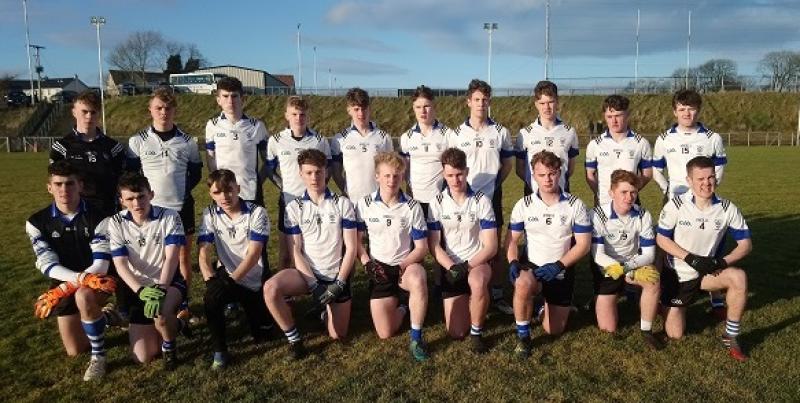 St Patrick's Maghera qualify for the Quarter-Finals as group winners.

St Patrick's Maghera's spot in the last eight of this year's MacRory Cup was sealed on Thursday night, without kicking a ball.

Cavan's win over Holy Trinity in Clones, in the last game of the group, ensured they finished on four points with Maghera and St Eunan's Letterkenny.

Maghera top the group on score difference, putting them into a McCormick Cup semi-final against Omagh CBS and the MacRory Cup quarter-finals in February.

They were beaten by Letterkenny on Tuesday, more emphatically than the 4-6 to 1-8 scoreline suggests, but their mauling of Cavan in an earlier round helped their cause.

Cargin's Paudie McLaughlin, as well as the Lavey quartet of James McGurk, Jamie Duggan, Matthew and Enda Downey will come back into the mix for business end of the competition.

St Mary's Magherafelt will need to navigate their way through the play-offs if they are to progress into the knock-out stages.

They face an away clash with St Patrick's Cavan in round 1 of the play-offs, after losing all three group games.

'The Convent' got off to a poor start in their opening game with St Patrick's Armagh and their storming comeback fell short.

Against Omagh, they were level at the end of normal time before losing by two points. In their final game, with nothing to be gained, they led St Ronan's for much of the hour before changing their team around and falling to a third defeat.

The winners of Cavan and Magherafelt will play St Macartan's Monaghan in round 2.

Cathair Dhoire, in their first team of life at MacRory level finished third in their group. After beating Coláisti Inis Eoghain in their first game, they lost to St Macartan's Monaghan and St Patrick's Dungannon.

The Derry men face a play-off with Patrician Carrickmacross in January, with St Eunan's Letterkenny awaiting the winners in round 2.

In the McLarnon Cup, Rossa Park hosts a top of the table clash on Friday (1.00) between St Pius Magherafelt and St Columb's Derry.

Both sides have won their two games and the group winner, like in the MacRory Cup, will book their spot February's quarter-finals.

Should the game end in a draw, St Pius (+32) have the superior score difference and would top the group.

In a new development this season, all four group winners will play in the O'Doherty Cup after Christmas. OLSS Castleblayney topped their section and will face St Pius or St Columb's.

Loreto finished third in the group and will play St Malachy's Castlewellan in their play-off in January.