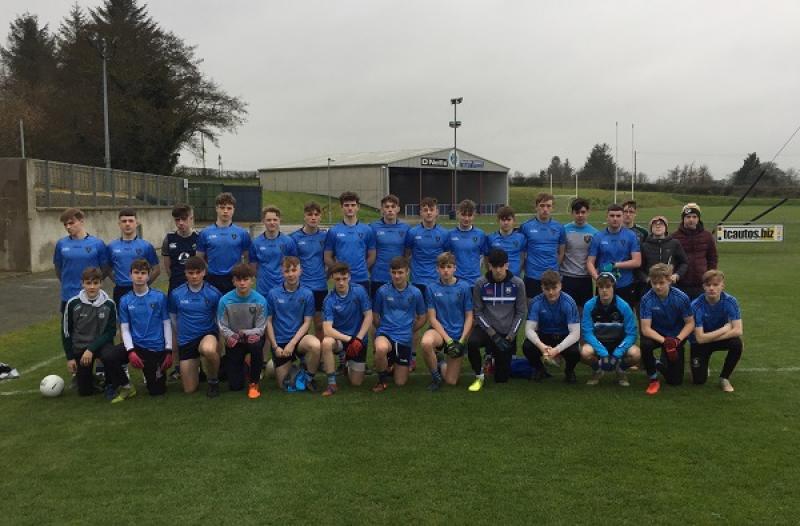 RANNAFAST CUP SEMI-FINAL (U16 'A' FOOTBALL)

A late 1-2 barrage from Diarmuid King wasn't enough to prevent a well-drilled St Mary's Magherafelt side reaching this season's Rannafast final, after a game they controlled for long periods in perfect conditions at Killyclogher.

When Niall O'Donnell's high 55th minute effort dropped over the bar, it put Magherafelt 3-10 to 2-6 ahead and trhe deal appeared to be sealed.

King's stoppage time penalty later cut the gap to two points but St Mary's Ryan McEldowney won the next kick-out and when the attack fizzled out, referee Conroy blew his final whistle.

Three Terry Devlin frees had Magherafelt into an early lead after a lethargic opening quarter and by the 20th minute Ruairi Forbes extended the margin to five before King opened the Enniskillen account.

Goalkeeper Ross Bogue was harshly blown up when in possession and from the resultant penalty Devlin helped Magherafelt into a 1-5 to 0-3 interval lead.

A bullet to the top corner on the restart from the silky Devlin gave Magherafelt an electric start to the second-half before Bogue denied Ryan McEldowney a goal seconds later.

A 42nd minute goal from sweeper Micheal Flanagan gave Enniskillen a glimmer. But it was immediately cancelled out by the impressive Conchuir Johnston who tucked to the net after fielding a high ball into the Enniskillen defence, making the score 3-7 to 1-5.

King netted from a penalty but Magherafelt still looked comfortable and added points from Johnston and O'Donnell before King's late show.

Magherafelt will face neighbours St Patrick's Maghera in the decider after they came from a point behind at half-time to beat St Colman's Newry by eight points at Derrytresk.