The return of the Jedis 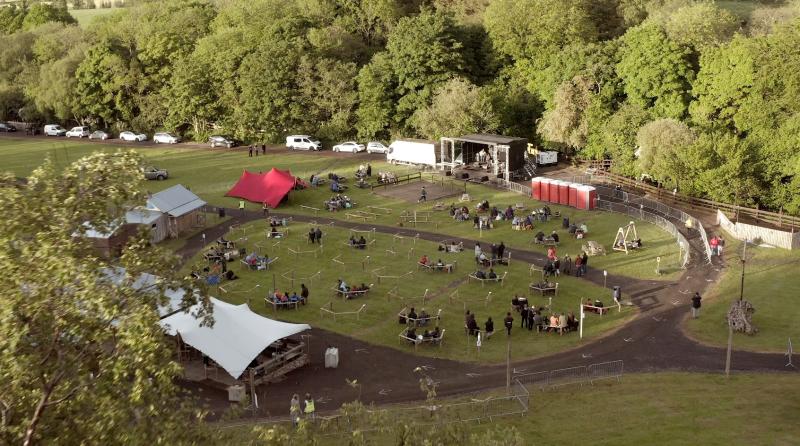 Two hundred and fifty invited guests enjoyed sets from ROE, No Oil Paintings, Ports and Jealous Of The Birds, as they observed social distancing guidelines set by the gig organisers.

The social distancing rules saw people watch the gigs from tables and individual audience pens in bubbles of four to six people.

A one-way system, hand sanitizing stations, toilet cleaning, signage and social distancing marshals also added to the safety protocols and ensured that the event could take pace as safely and as socially distantly as possible, without taking away from the atmosphere of the event.

Stendhal Festival director, Ross Parkhill, said it was a huge thrill to be able to host live music at the farm again and that the event went off exactly to plan with no major issues what so ever.

“It was absolutely brilliant,” said Ross. “We’ve missed this so much so to be able to put on a gig again means the world to absolutely everyone involved with Stendhal.”

He added: “We are used to doing much bigger gigs but this one really felt special. It felt like a real release and you could feel that throughout the audience, the performers and the staff here. It felt like hope realised.”

Ross added: “In terms of the numbers, we could have had more people but along with getting a gig on stage this was also about getting a trial run of our social distancing procedures before we welcome larger crowds in July and August.

“Safety of our visitors is always our number one priority at any edition of Stendhal but it will be our number one, two and three priorities this year.

“We are really pleased with how everything went in that sense, everyone who we spoke to at the end said they felt safe, felt that the Covid measures were easy to follow and more importantly, said that it gave them a bit of confidence venturing back into crowds as we hopefully are seeing the back end of this terrible pandemic.”

The Northern Ireland Executive announced on May 20 that outdoor events for up to 500 people, including concerts could take place from May 24 and Ross said once that announcement was made, Stendhal simply had to act.

“When we read that outdoor concerts for 500 people were back on the agenda we sort of had to do a double take to see if we had read it correctly.

“Then we emailed the Executive Office and the Department for Communities to clarify and validate that the press release was correct and when that came back in the affirmative we knew we had to act right away.”

Naomi Hamilton, of Jealous of the Birds, was one of the performers on the night and following her first live performance to an audience since March 2020 she said it was a night of high emotion.

“What a joy,” she said. “The show was an absolute joy and a testament to the fact that outdoor music and festivals can run safely and smoothly in this time of covid recovery. People need the arts and music now more than ever and being able to share that together between artists and audience was pretty stellar.”

ROE was also playing her first ever gig with a full band, a direction her live performance was just about to take before the pandemic put the brakes on everything.

She said: “It was the best feeling in the world to be back on a stage in front of an actual crowd again.

“Everyone was in amazing spirits, and it felt so right to be there. This is something that Northern Ireland. really needed and I think the crew did an incredible job of making everyone feel safe and welcome.”

With this successful trial run under their belts, the team at Stendhal are now preparing for their 10th anniversary events next month and August and Ross said that he hoped the overall total of 500 people currently allowed to gather for concerts would have increased by then.

“We are hoping that we can have 2,500 people here in July and 5,000 here in August. The pilot events in England and around Europe have shown that events of that size can take place safely without social distancing, so what we are planning will be even safer.

“We need guidance on the overall ‘outdoors summer’ and our place within that as soon as possible. We are good to go, we will do whatever it takes to safely deliver some much needed festivity for artists and audiences this summer.”