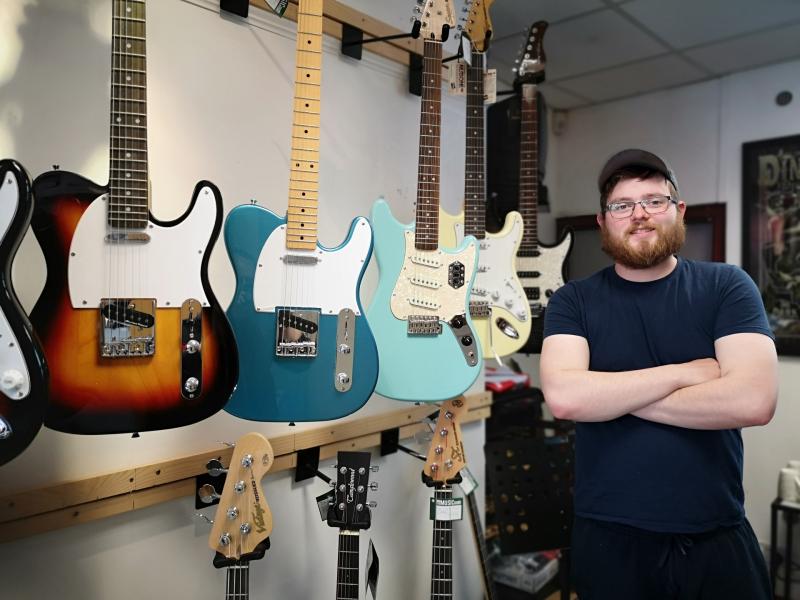 Car windows are wound firmly down as the traffic snakes its way around Killowen. It's muggy by the Bann.

There is a queue to get into the Dunne's car park at the bottom of the town; flashing indicators and passive aggressive faces peering from behind steering wheels.

Nature, or at least the financial and social ecosystem of Coleraine town centre, is healing.

Smokers chat outside the Diamond Centre, while across the cobbled street, the artificial grass area that used to exist outside the Queen's Arms is gone, cordoned off by council-branded fencing.

The tinny sound of piped music echoes in the arena created by the high buildings that surround the town hall. 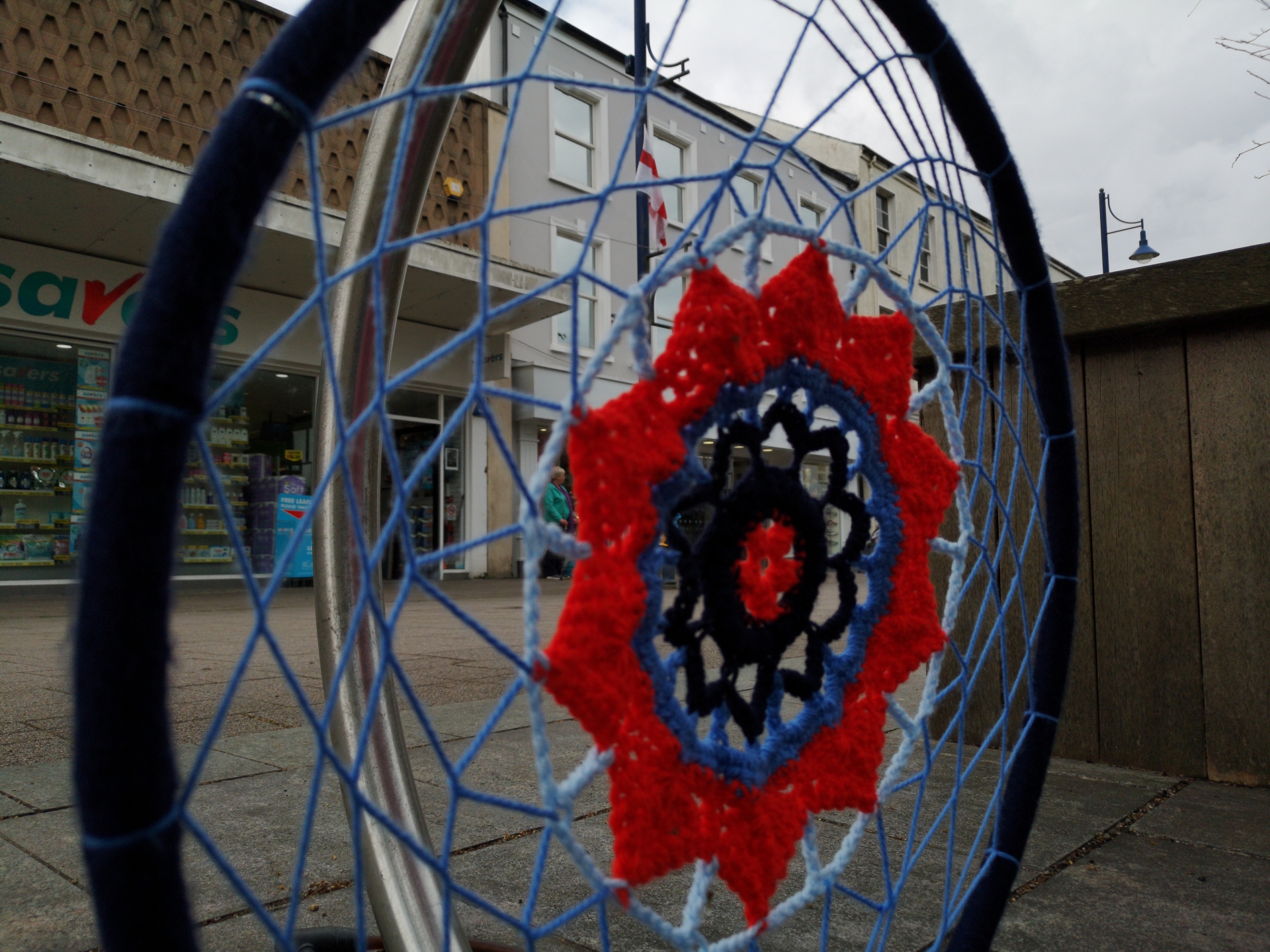 The area has been yarn-bombed, with the colourful knitted items competing for attention with a host of Union and NI flags flying from lamp posts.

Bertie Peacock's statue on Queen Street has not been spared, a pair of blue knitted shorts and matching blue and white scarf staking Coleraine FC's claim to his talent and legacy.

Mid-morning shoppers are milling around, hopping from shop to shop with smiles on their faces. Families navigate the town's pedestrianised zone with prams and toddlers.

A young mother pauses to feed her child on one of the town centre benches, with many of the other spaces occupied by bored-looking men reacclimatising to the art of accompanying spouses shopping.

CCTV eyes the street, but no one is in a rush. Coffee shops are full of reunions and excited, urgent chatter. Traffic wardens are back on their beat. 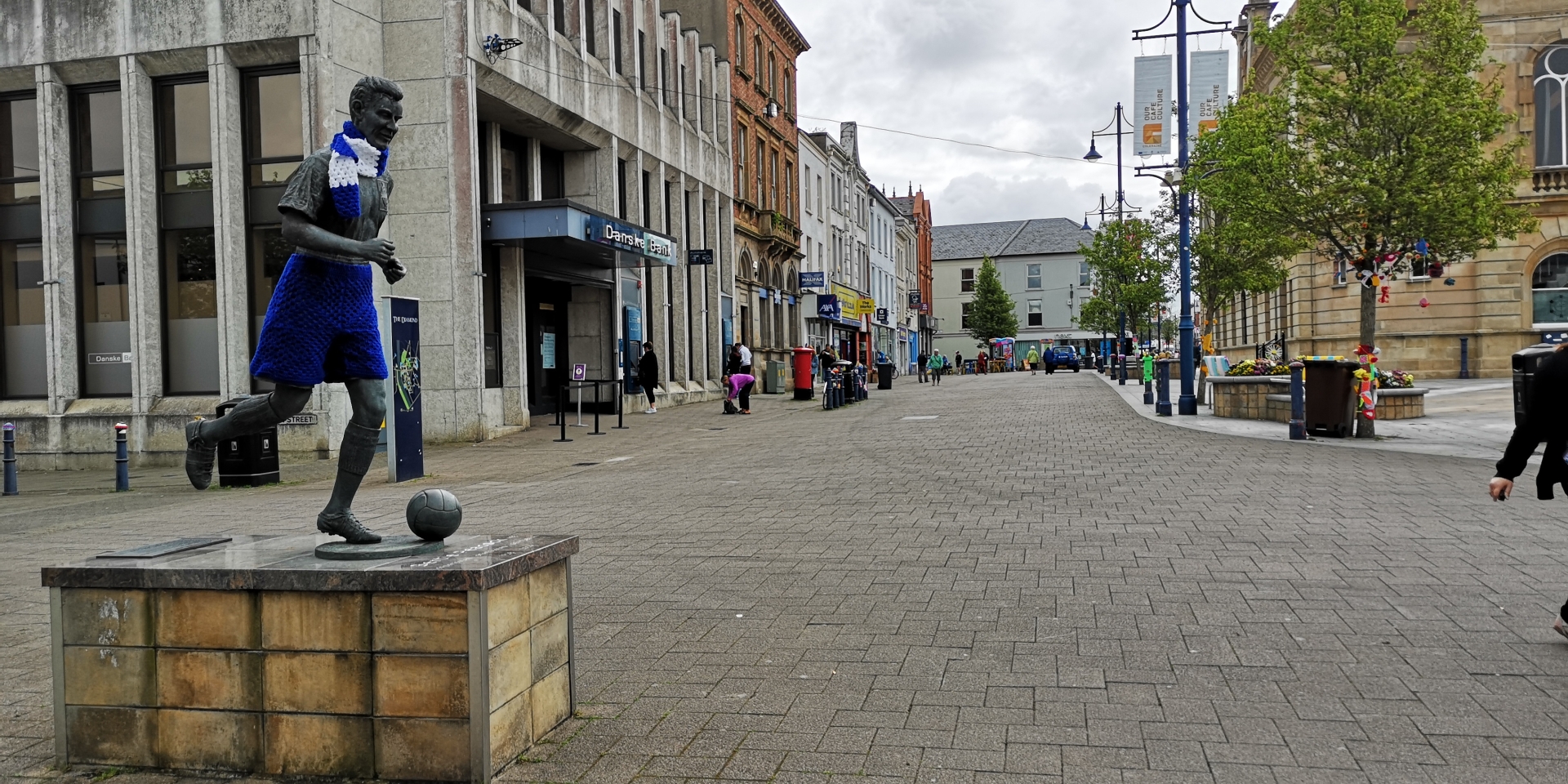 Indoor hospitality has been back a few weeks, but there are plenty in the town sticking to the al fresco habits they've adopted over the last year, escaping the heat and dining outside.

The bus and train stations are deserted, with just a few staff engaged in conversation next to the platform ramp. A few hopeful taxis are parked outside.

Down on New Row, one of the town centre's side-streets, the old post office has relocated across the road and merged with a Maud's Ice Cream outlet.

Further along the street, Dermot Loney is in conversation with a couple in the Music Rooms. They leave empty-handed on this occasion, but the store manager tells me they've managed well.

“It's been alright, we've managed to survive. The likes of lessons are our bread and butter, and being able to teach online has helped,” he says.

“We had to move the whole system online to keep the lessons going. The teachers definitely had a struggle at the start to shift everything over.

“We lost a lot of folk who just wanted to wait until things went back to normal, but we've been doing okay.

“The shop has been open off and on. You just don't know what's going to be around the corner. If it wasn't for the lessons, we'd be buggered.

“It's nice to see the faces coming in, we get a lot of regulars who would be asking where I'm gigging this weekend and a lot of folk that sit and talk music with you.” 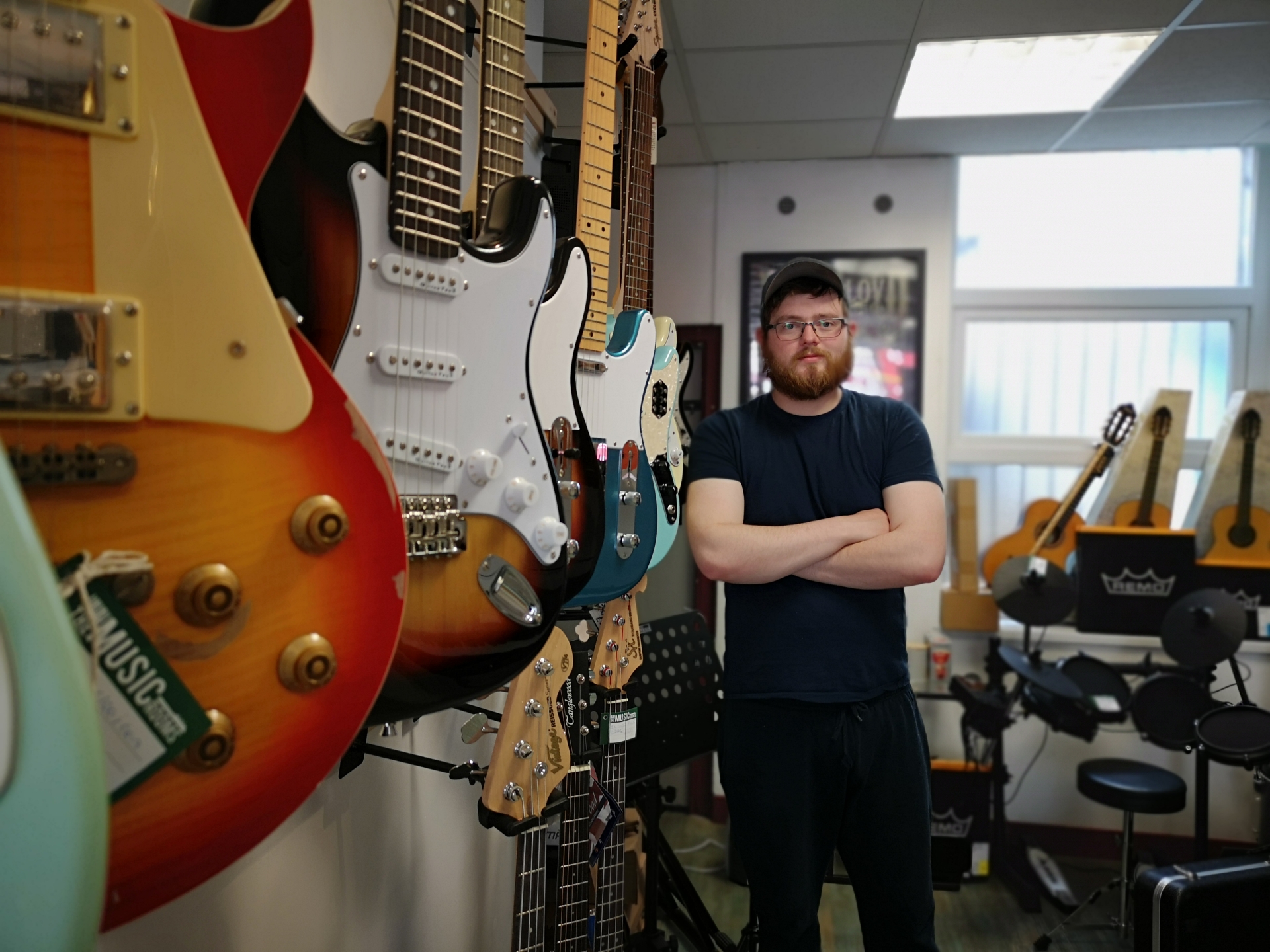 Like countless others, Dermot has missed the social aspect of running the music shop, servicing a community that thrives off collaboration and rapport.

The pandemic forced business online, where a buyers' market of second-hand instruments made it harder to compete, but the face-to-face aspect of buying has endured.

“The day non-essential retail was opened, we had the key in the door straight away, trying to order stock in and build back up to where we were,” says Dermot.

“The amount of folk who were buying instruments online over lockdown was serious, which is great to see. To be honest, as soon as people were out of work, they were selling their instruments.

“So the shops are affected by that too, because people were buying stuff second-hand at a steal, which is very hard to compete with.

“There's nothing better than being able to actually hold what you're going to buy. It's not about the money now, it's about how it plays.

This is a labour of love for Dermot, who gigs regularly around his home area of Randalstown, County Antrim, and its surrounding towns.

While it's good to get the shop open, he is looking forward to entertaining a crowd once again when restrictions allow.

“It's good to get the shop open again. We were really busy before, at Christmas we were booming, so I'd like to think we can build up again to that standard,” he says.

“From the owner's perspective, he probably has lockdown to thank for some things. In a lot of ways, we're better prepared now if anything like that every happens again.

“I'm really just looking forward to getting back out to be able to play gigs again. The majority of ones that work here are all gigging musicians and play at the weekend.

“Music is my life and I'm thankful to have it, especially over lockdown. Everyone has a sedative, you could easily sit down and play guitar for a couple of hours and get your head out of a bad space.” 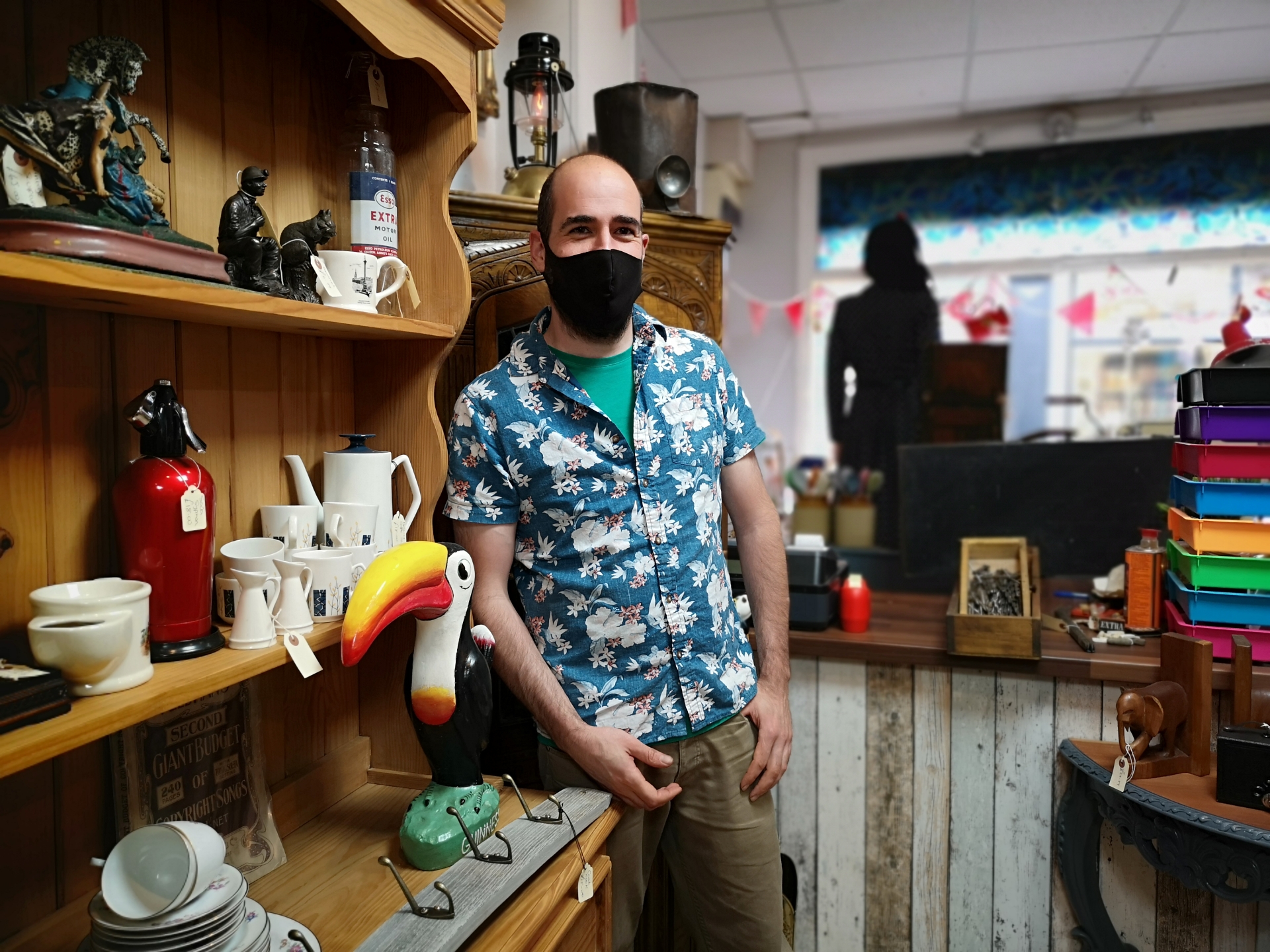 Ducking the bustling Diamond, I nip down Stone Row, where one of Coleraine's newest shop fronts is catching the attention of passers-by.

Vintage & Twee opened just a few weeks ago, and is piquing the curiosity of shoppers in the town. Its contents have been visually pored over since it opened.

Co-owner John Erskine is chiselling an old tool box someone has left in as I arrive.

“Someone brought it in this morning. I'm just cleaning it up and it's going to go in the window along with this washing machine,” he says.

“We've only opened three or four weeks ago. We were supposed to be open before Christmas but obviously lockdown hit and we didn't get open until April.

“It's been really busy. Lots of people come in here for a trip down memory lane. They aren't necessarily all buying, but we enjoy talking to them and meeting different characters.

“People come in for a chat too because they've been house-bound for a year.” 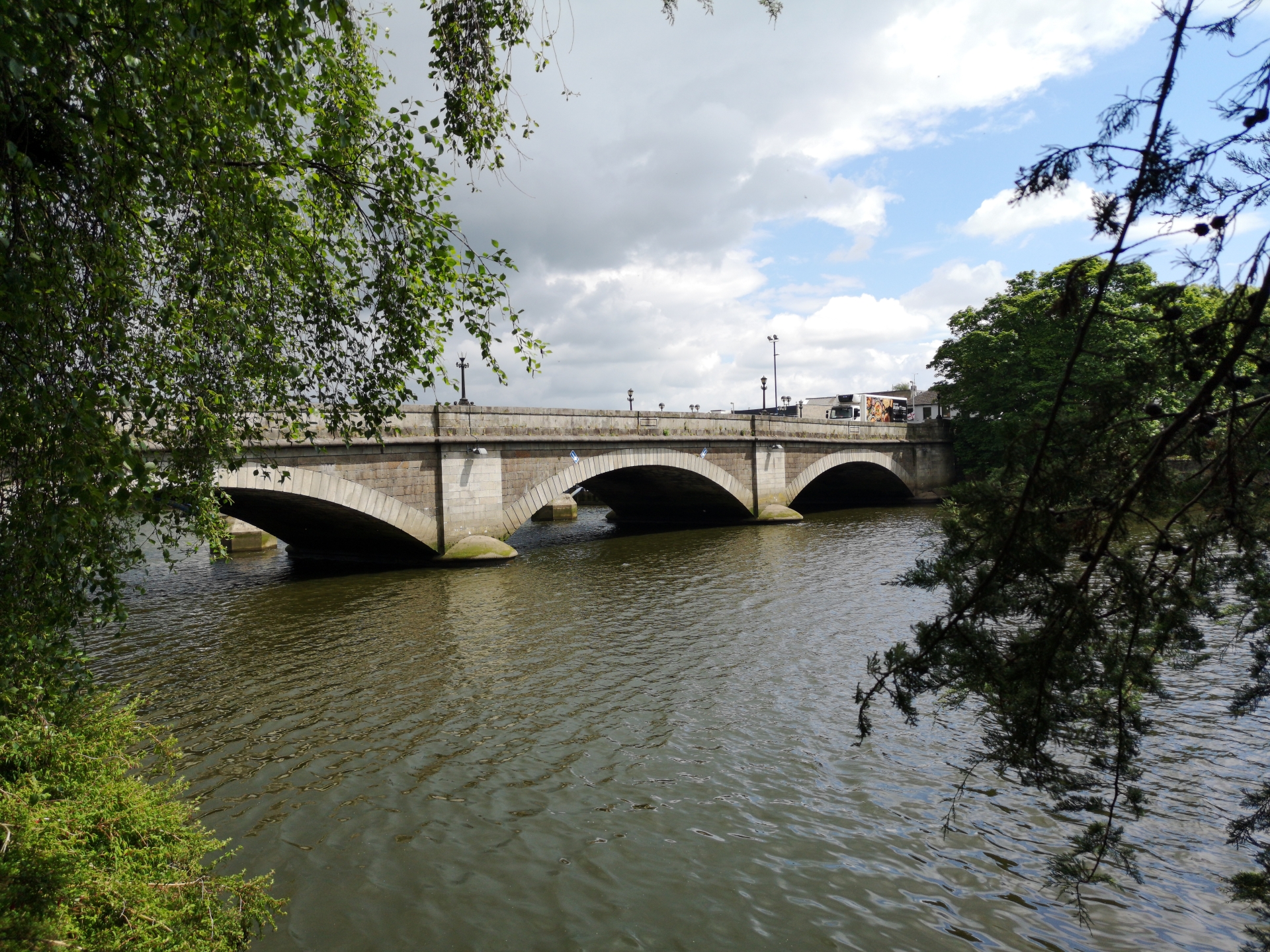 The old bridge over the River Bann in Coleraine.

The Cookstown native and his wife have recently moved home from Devon, England, and they will return on holiday during the summer, having cancelled a more exotic trip.

“We're going to go over to England and Scotland and do a bit of buying, pick up some of the stuff you can't get over here,” he says.

“We were going to got to France, we had it all booked in the spring time and lucky enough, we were able to get it cancelled.”

The shop is not a museum though, and there have been some notable sales since they opened.

“Coleraine is a brilliant location for footfall, we've never been right in the middle of the town before,” he says.

“It is so random what you sell from one day to the next. I sold a lawnmower yesterday; a 1950s petrol lawnmower.

“The guy wheeled it across the bridge right down to the car park in the town centre.” 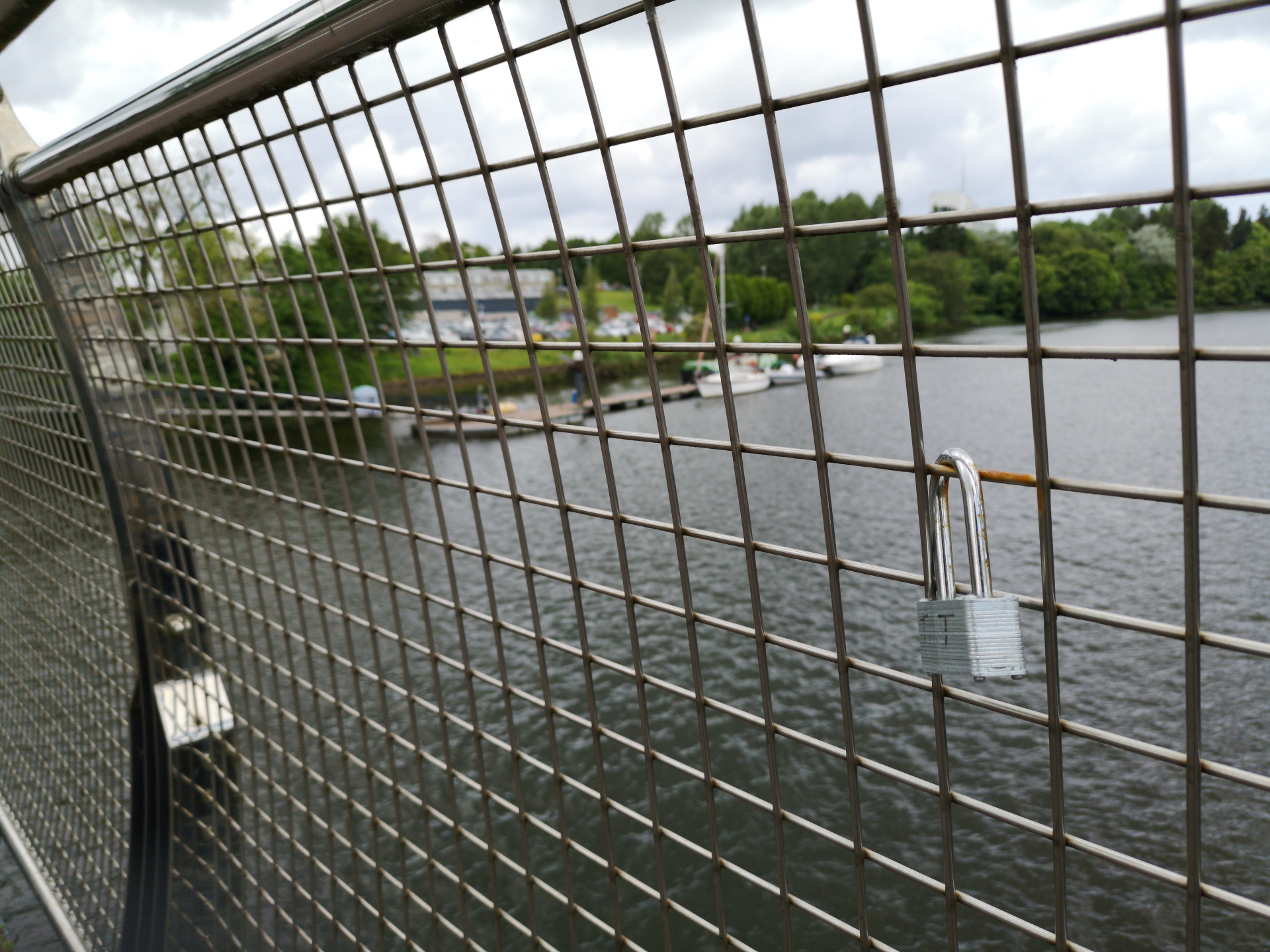 A cursory attempt at the 'love padlock' ritual has appeared on the footbridge across the River Bann in Coleraine. The custom has origins in Serbia and features on bridges in many European cities.

The trend has not caught on, and there are no gleeful punters pushing lawnmowers around when I return to the car.

Sunshine has broken through the cloud though, and the Bann is sparkling. The number of people on the streets has been swelling throughout the afternoon.

Exam-level school pupils walk in small groups through the town, enjoying the rush of freedom that comes with study leave.

Old friends are meeting up in the town's cafes. The rabble of normality brings a great sense of comfort.

There is little mention of Covid.

It's a silent footnote on the accelerating return of normality.