LIFE IN LOCKDOWN: No dancing on the sand, but social life is back in Park

The County Derry village is ready to embrace a return to the social scene. 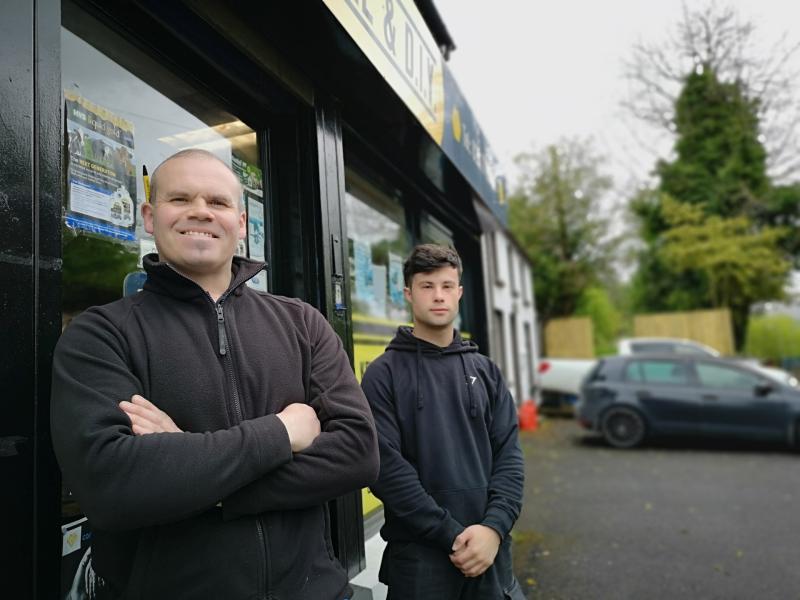 Greg McElhinney and Matthew Devine have had plenty of chat in the shop over lockdown, but missed the social aspect outside of work.

For a village named quite literally after a field, Park is deceptively big.

After crossing the bridge, I head up the hill and pull the car in opposite the Vivo and the magnificently named Rio Grande bar.

Park's 'Rio Grande', the Faughan River, flows through the centre of the village, which this afternoon sits under an angry-looking sky.

A woman walks her dog down Learmount Road, her face set against the stiff breeze that is swishing through the trees surrounding the village. 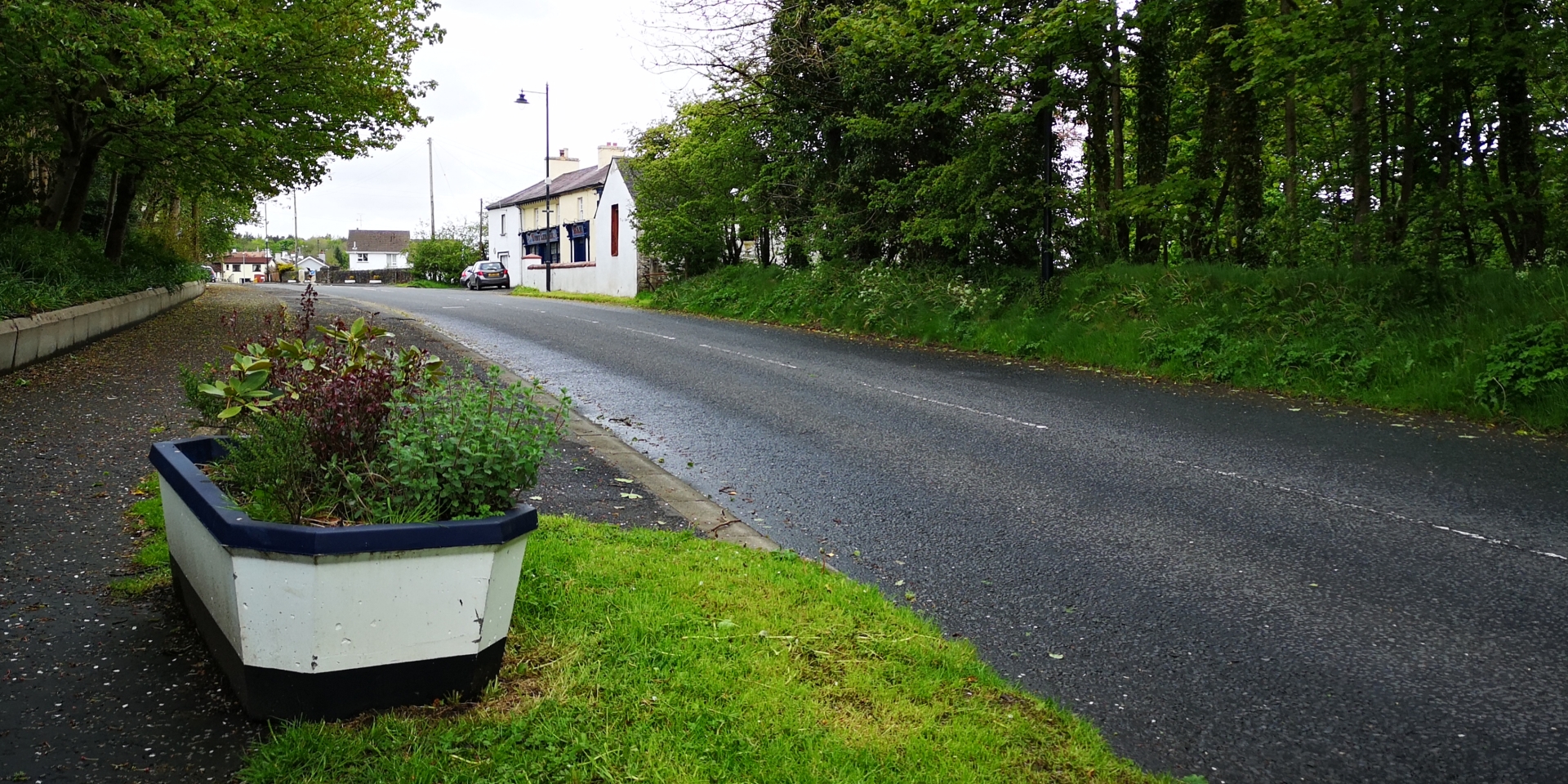 The scene on Learmount Road leading up the hill.

Rain starts to fall as a mother guides her toddler out the doors of the Vivo, one hand clutching hers and the other gripping the bottle of juice he has just been bought.

Up the hill comes a learner driver seemingly on a lesson. She stops outside Learmount Resource Centre and disappears into the building, before emerging with her child in tow to resume her lesson.

A delivery driver pulls into the yard of Devine Kitchens. He returns to his cab and pulls out a hammer. Things must be getting serious.

As I cross the bridge, I spot the wheel from an old watermill by the river side, almost reclaimed by its surroundings. A remnant of an 1894 flax mill known as Quigley's Mill.

Perhaps the most clear view of the mill is from the top of the hill outside Park Hardware and DIY. 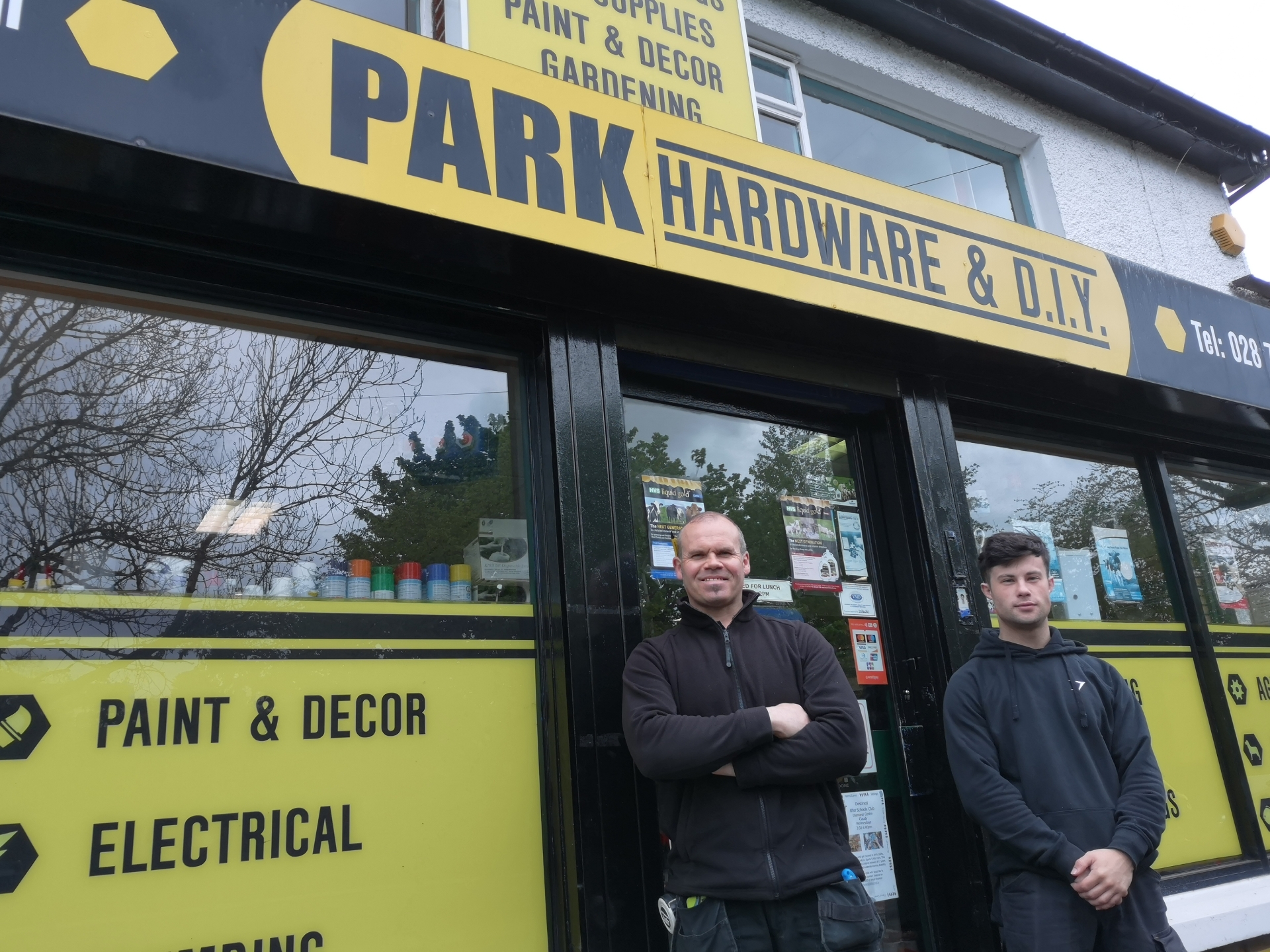 Inside, owner Greg McElhinney says the last year has been busy.

“With construction and everything else closing down last April, we were very busy, which was good for us because people from the local area were able to do home projects,” he tells me.

“The weather was good as well, so you'd a lot of painting and decorating – fences and gardens and stuff like that – going on.

“People were happy there was a local business still operating, because a lot of the bigger hardware stores had closed.

“It got to the stage when it was hard to source materials because suppliers were closed until June time, but people were happy enough to occupy their time. They had nothing else to do.” 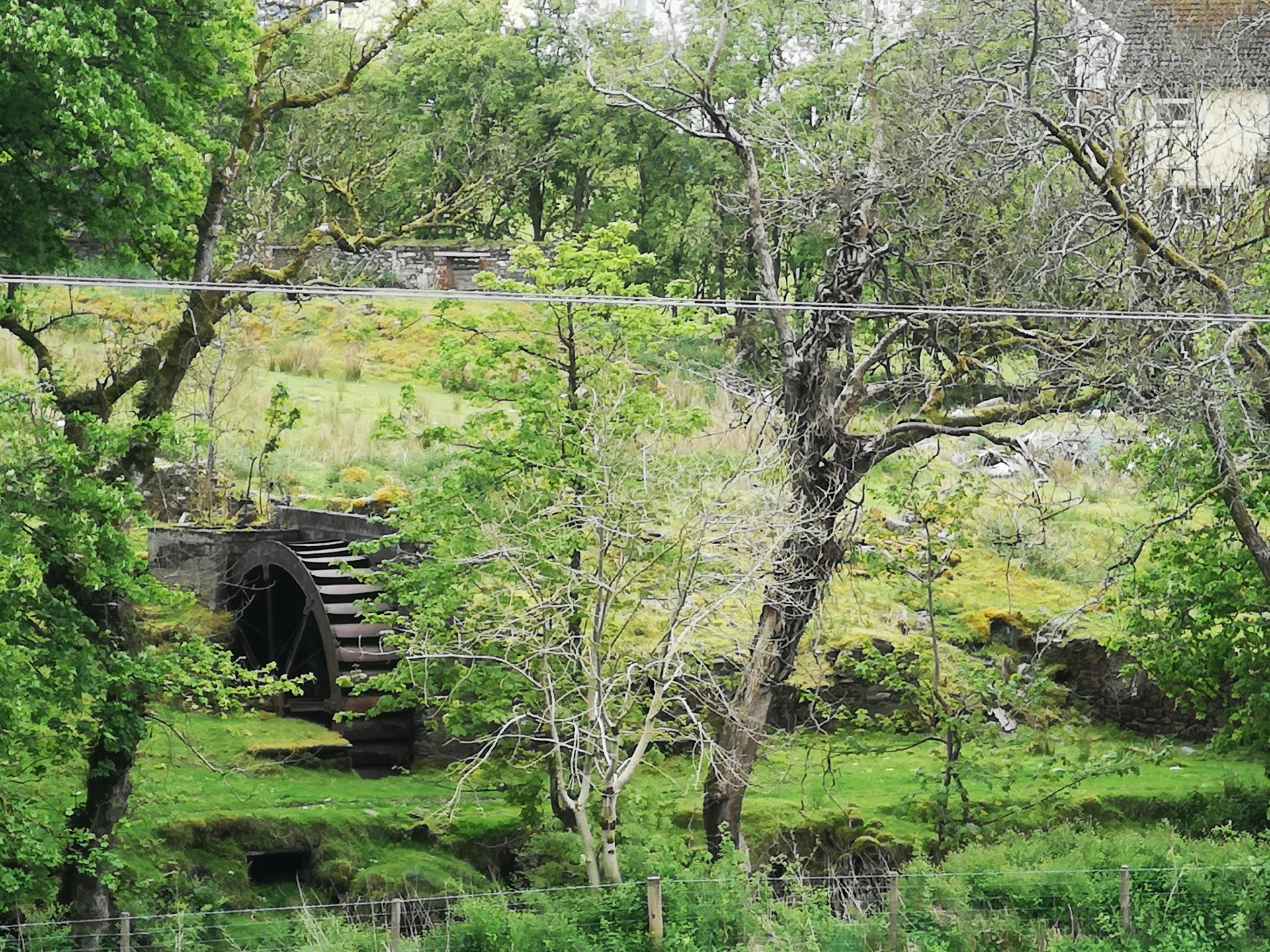 The remains of Quigley's Mill, Park.

Park's postal area recorded an increase in Covid cases last week, and despite the attachment to Derry city skewing the numbers, Greg admits there is still a degree of worry locally.

“The majority of the population feel we still have to be serious about this. It's drilled into everybody at this stage, like putting your seatbelt on in the car,” he says.

“The worry now is we're straddling the Donegal border to a certain extent and case numbers are very high either side of it.

“There is more positivity now than there was maybe six weeks ago though. Society is opening up again, and the vaccinations are a positive thing.”

Covid has taken its toll on rural life too, and compliance with regulations has come at a social cost for village communities.

“Where we're based is very much a rural area, with a lot of the farming community and tradesmen and stuff,” says Greg.

“You get some people who, by chance, meet up outside the shop here and have an opportunity to have a chat that maybe haven't seen each other in a few months.

“Those guys would have been at markets or farm meets every week, or pubs, but now you see them sitting out there for half an hour chatting to each other.

“The social aspect, face to face, is the biggest thing.

“The local community group have done a lot of work with the walkways there over the past number of years, which is very good.” 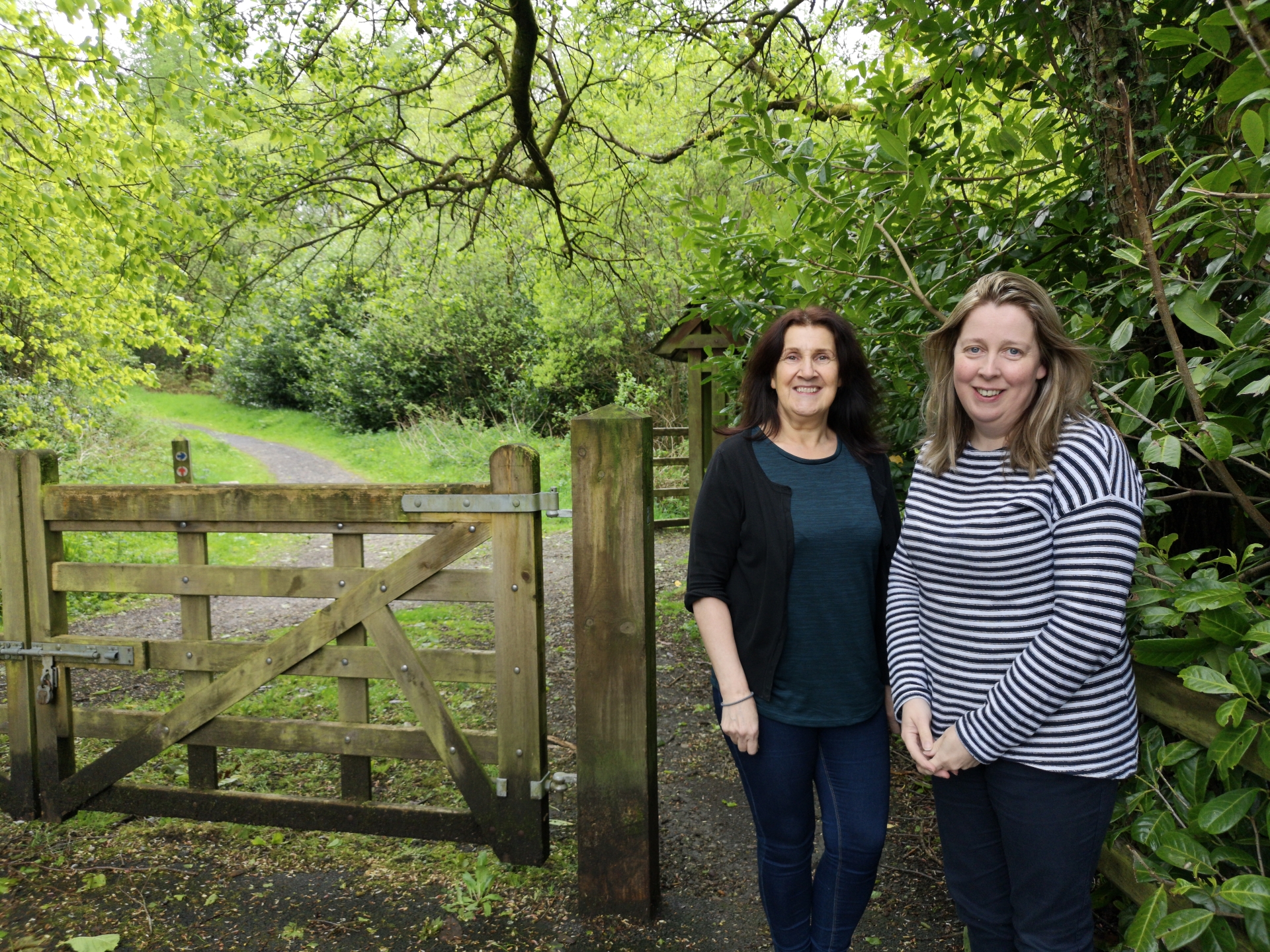 The local community group to which Greg refers is Learmount Community Development Group, which is nestled down a lane next to the entrance to Learmount Forest.

Over the last year, Caroline Lynch and Catriona Doughty have noticed a big increase in people using Park's 'hidden gem'.

“We would have come down here some mornings and that car park would be full,” says Caroline.

“Our secret Learmount Forest isn't a secret any more, and that's great, because everybody wants out, and we've had drop-ins coming from that.”

“The forest has been fantastic for people being able to get out and safely meet their neighbours,” adds Catriona.

“They'll maybe call in at quiet times to have a socially distanced cup of tea. That social aspect has been missed, they are missing company and casual conversation.”

Caroline feels the experience of the last year has sharpened focus on the issue of loneliness that had been hiding in plain sight.

“We had a man who lives alone and had been sick for two or three days,” she says.

“He hadn't been out and had no food in the house, so thankfully we were able to help with that.

“You just know people are lonely and looking to get out again, but at the same time are a bit anxious about it.

“They're happy to take the summer out of it and see what happens. There is certainly a lot of loneliness, isolation and depression though.

“You could obviously be in the middle of a housing site and still be lonely, but when you see some of the people on their own, up a lane, they see nobody. They barely even see the postman now.”

Working with both young and old people, the group have seen the effect the pandemic and its associated lockdowns have had on both generations. 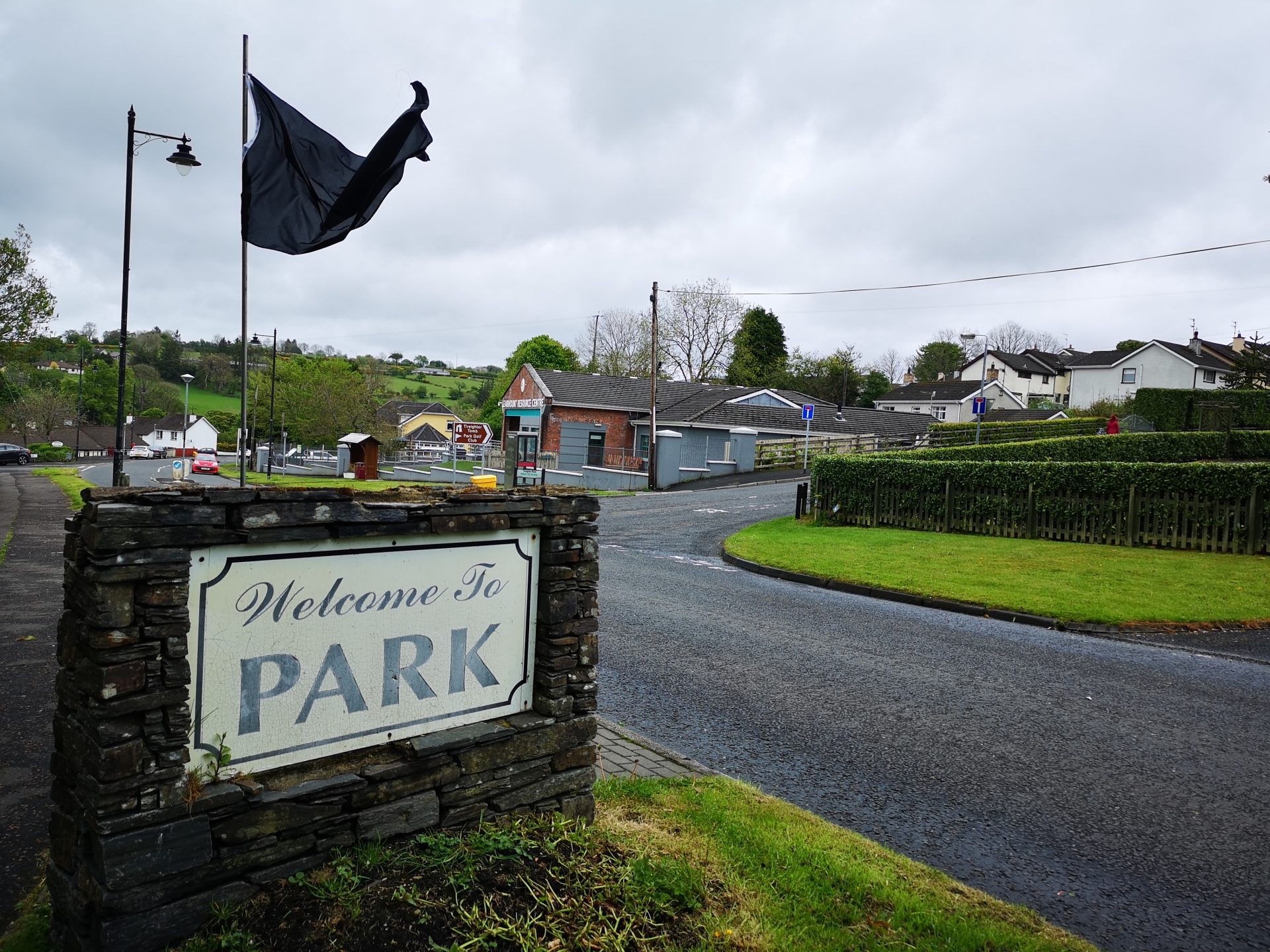 “A lot of our work is with older people, and whilst they're saying they're fed up, some of them are getting a wee bit set in their ways,” says Caroline.

“You just know by talking to them. We had a woman who always came in every week, even when it was bad, and she hasn't been in about two months.

“It's highlighted how much we miss the social side of things, not being able to get out and meet friends. Even for the youth.

“People always think all they need is their phone, because that's all they're sitting on, but you can see now how the youth are crying out as much for social contact as any other generation.”

There is hope though, that with the vaccine's roll out and the upcoming warmer weather, that the group will be able to run some of their usual summer events.

“We are looking at putting together a summer programme, but we'd be a bit nervous ourselves about bringing a group of people into the room,” says Caroline. 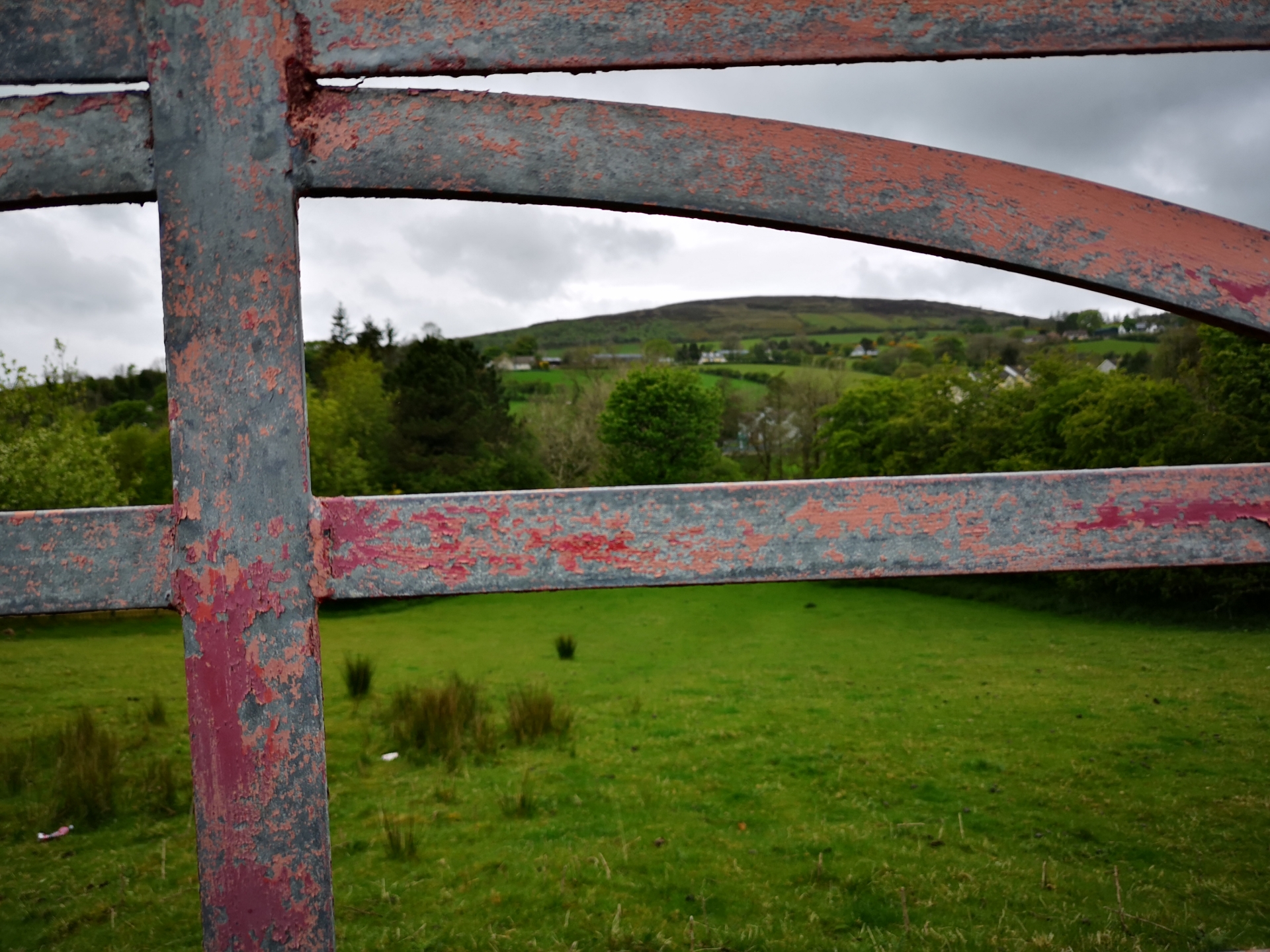 “It would be perfect if there was good weather, because it will be planned outdoors. If the weather is bad, we'll take it over to Park hall, because it's a bit bigger than here.

“We have funding for dancing and music, which I think people would love to hear. We'd love to have tables out there on a nice evening, with a bit of a barbecue and a bit of music.

“You'd like to think by September, we should be able to get going.”

On the way back through the village, the shutters are half up on the Rio Grande as preparations continue inside. By the time you read this it will have reopened its doors.

Hospitality has returned throughout the county, another step on the road to recovery. The farmers outside Greg McElhinney's store now have somewhere else to shoot the breeze.

For the next few weeks at least, Covid fears will be drowned out by clink of glasses, the audible relief of the repressed socialite and the laughter of friends reunited.

Dancing, however, is still prohibited under the regulations.

It may need to be done across Park's Rio Grande, rather than inside it.