Hospitality and retail made a welcome return along the coastal town's promenade last week. 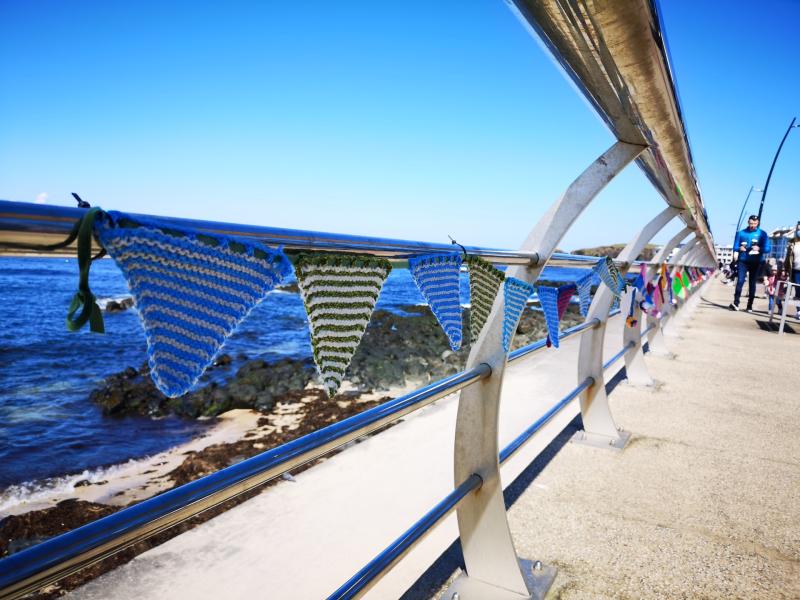 There are open doors all the way down the street, grateful business owners excitedly greeting customers. Ceramic cups sit on tables outside coffee shops.

Blue sky is reflected on the waves lapping against the rocks on the seafront, sending spray around the flocks of socially distant seagulls camped there.

Walkers huddled in coats make their way around the nun's walk, the stiff breeze whipping around them despite the bright sun.

There are young families in the play park along the promenade; parents grouped together on the steps as their children run around the sand.

In the distance beyond the harbour, a couple are perched on the cliff enjoying a picnic. There are smiles all round and cheery greetings along the street. 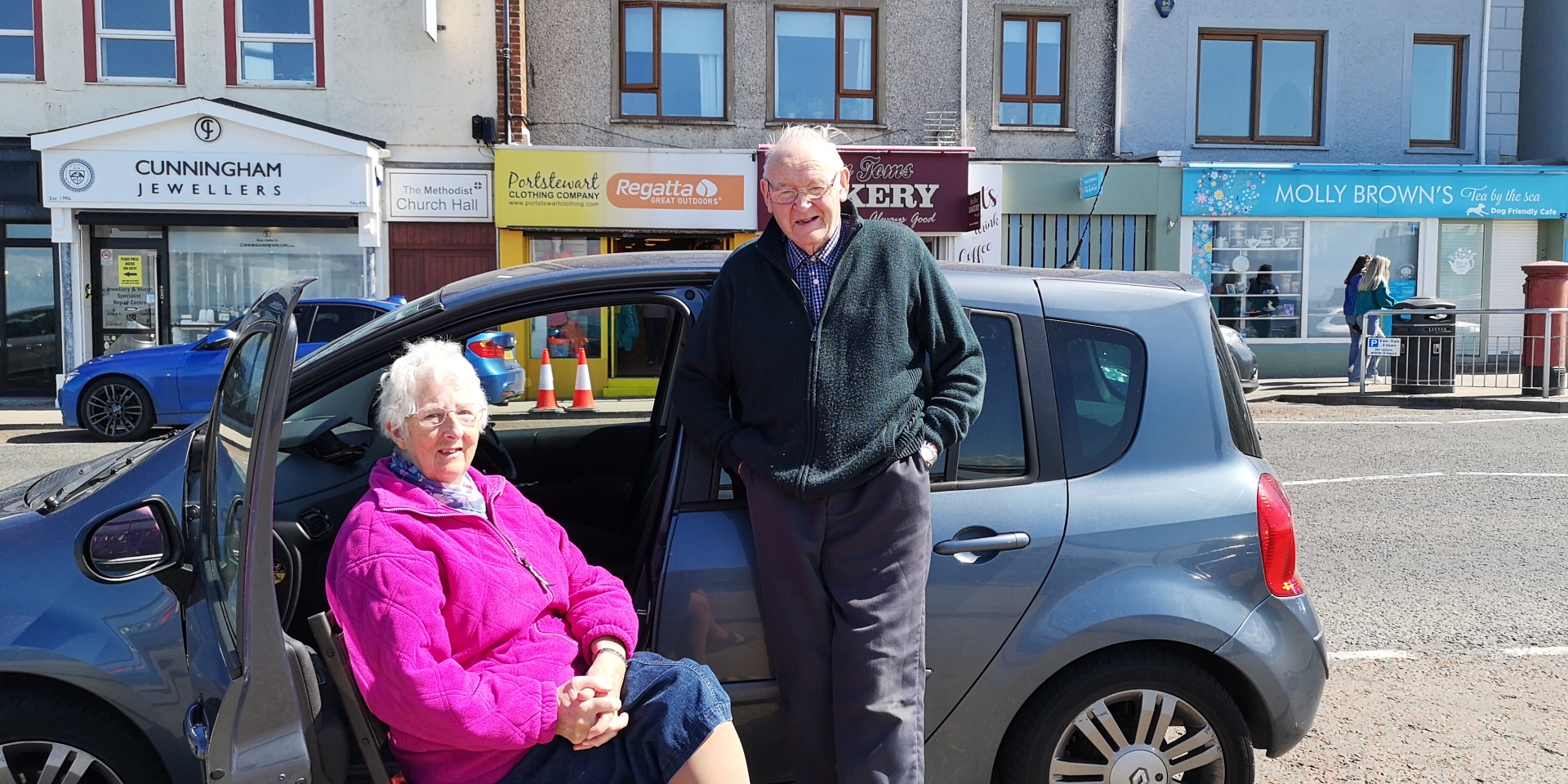 Linda and David Robinson enjoying a day out at 'The Port'.

Portstewart is open. Restaurants, cafés and pubs are serving outdoors. Souvenir shops have rolled out the inflatables. Shoppers nip in and out of the promenade's boutique shops and art galleries.

Linda and David Robinson have made the most of the pavement. The elderly couple from Ballymena have rolled out the picnic chairs and are set up outside their car.

It's only their second trip out in over a year, they tell me.

“We've just popped in for a cup of tea in the café,” says David.

“It's great to be out and about. It's been a long year and we've missed it,” adds Linda.

The grins and greetings along the promenade make it clear they aren't the only ones who have missed it. Portstewart's self-catering accommodation is open from today and occupancy appears high.

In A Broader Picture, a homeware shop on the promenade, staff are enthusiastically assisting coffee-cup-toting customers.

As they browse, owner Hannah Mackay pauses for a moment to listen to their low murmurs in delight.

“It's good to have a wee bit of normality again,” she tells me.

“We closed on Christmas Eve and have just opened this morning. We were closed for four months, but over the whole year, we were closed in total for seven months.

“It was hard to plan. It's hard to keep up momentum and motivation when you're opening and closing, taking stock out and putting it away again.” 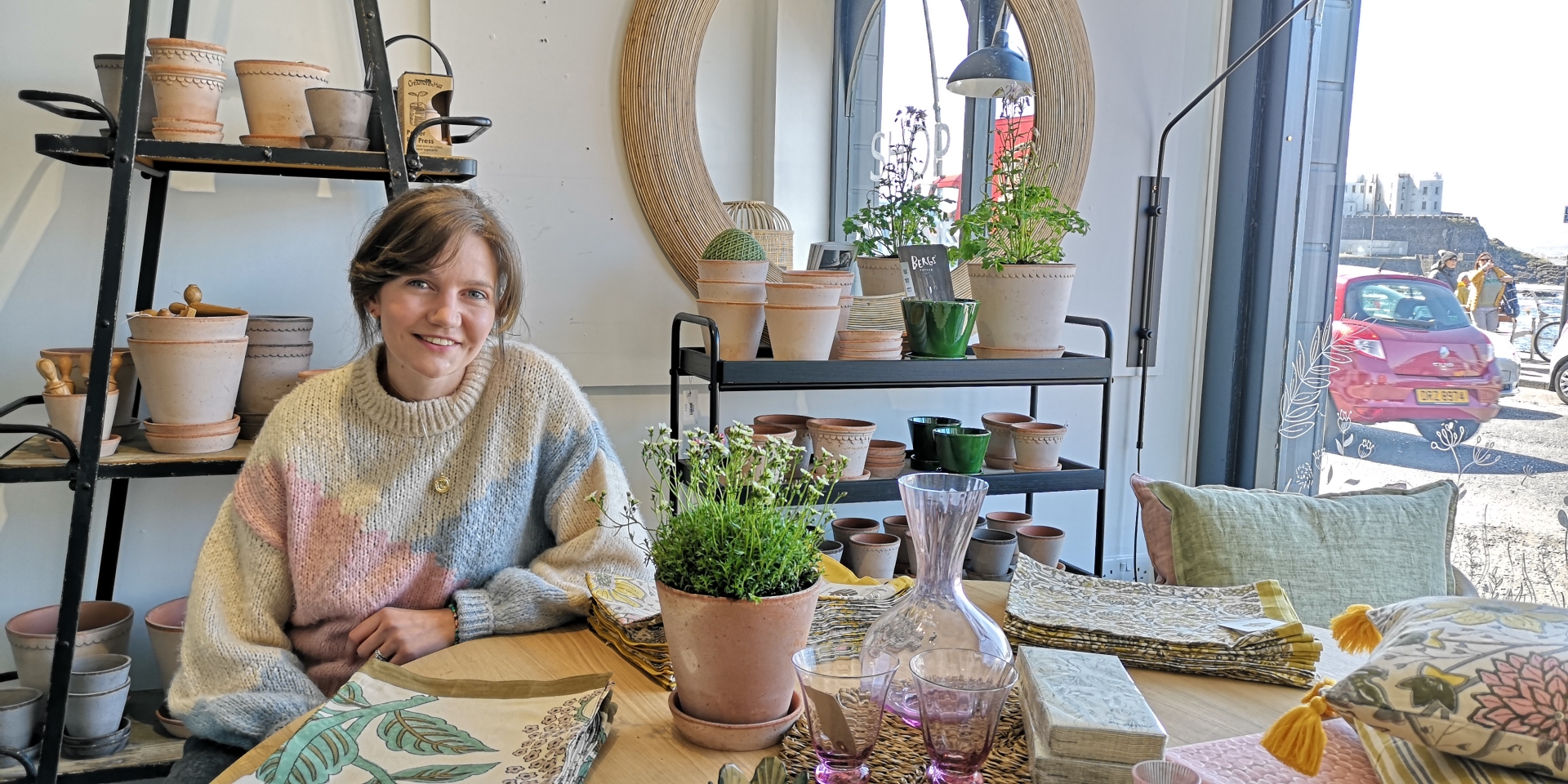 Hannah Mackay, owner of A Broader Picture, is delighted to be back on the shop floor.

The coastal town's economy depends on visitors to the area, and with the extended periods of lockdown reducing footfall, things have been difficult.

“Our location is such a big factor in how busy the shop is. During the first lockdown, it was like a ghost town here, it was so quiet” says Hannah.

“During the last one, it was slightly busier. With the shop being closed though, and no click and collect, even if people were here it wouldn't make that much difference.

“We actually started doing free local deliveries, because if someone wanted to buy, say a candle at £10, they don't want to pay a shipping fee. It worked quite well as an alternative.”

Although shopping online has worked well for the store, Hannah says it is a poor substitute for the face-to-face interaction of the shop floor.

“The customers have been wonderful, there has been a really nice buzz. Everyone is pleased to get out and about again,” she says.

“The shop, from we started, always was about the physical shop. Online is great, and it's a good addition, but our shop has always been about the experience, browsing and picking products.

“We've been in the shop getting things ready for reopening, but it's just been us. The whole reason you have a shop is to have your customers, so it's nice to be a shopkeeper again.”

A quick glance at my phone and Instagram is a forest of pints. Many across the country have swung open the doors to the beer gardens at 12pm. 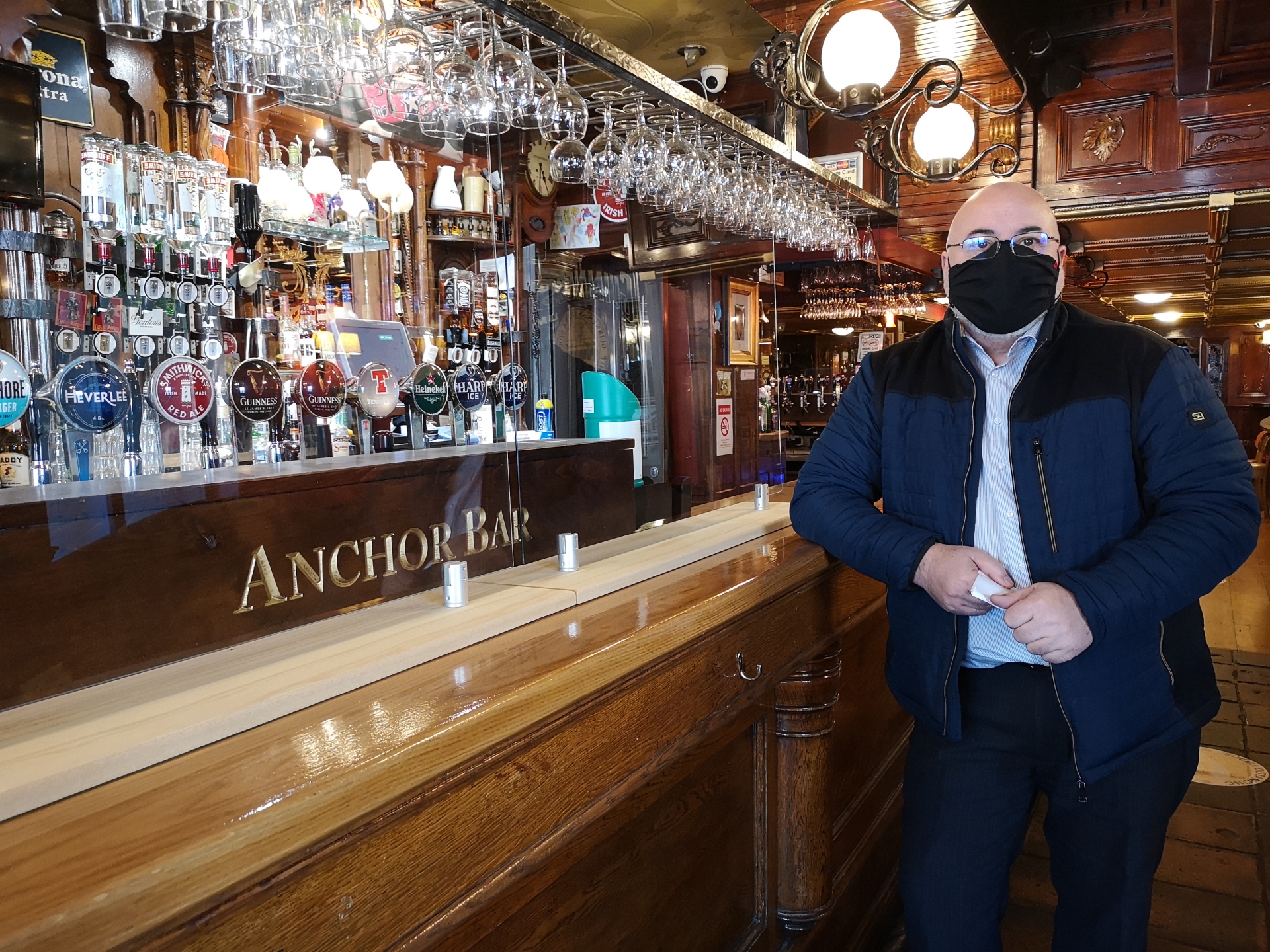 At the top of the hill, The Anchor has taken a more restrained approach and are set to open at 4.00pm. It leaves plenty of time for General Manager Danny Coyles to fill with preparations.

When I sidle up to the bar, he's clipping a fresh new poster into the frame outside the hotel reception. I'm almost giddy following him into the bar for a chat.

“Portstewart is like a ghost town Monday to Friday, and comes alive at the weekends. The self-catering accommodation has opened today and I've seen a massive influx of people,” he says.

“The supermarkets are all very busy with people doing their shopping for the weekend, so we anticipate there will be a lot of people along the north coast, especially with the bank holiday.”

Visitors are a crucial section of The Anchor's clientele, but Danny says the opening weekend is a good way to reconnect with their more familiar customers.

“It's basically just to touch base with our regular customers again,” he explains.

“With several other premises in the town now deciding not to open, it's going to potentially put an extra burden on the places that are.

“The big thing for us was finding out what the regulations were in terms of reopening. We knew it was going to be outside, so we're only open for drinks service only this weekend.

“We're just going to have to wait and see. We've been watching place after place be told that their outdoor areas are non-compliant.

“They were fairly late coming with the definition of outdoors and nobody anticipated it was going to be as per the smoking regulations but that's what it is.

“We're okay, we only have a small outdoor area, but a lot of places have their outdoor area in a courtyard at the back, and it gives them terrible difficulties.

“A lot of people have invested heavily in getting their outdoor spaces ready, only to be told that they are non-compliant.” 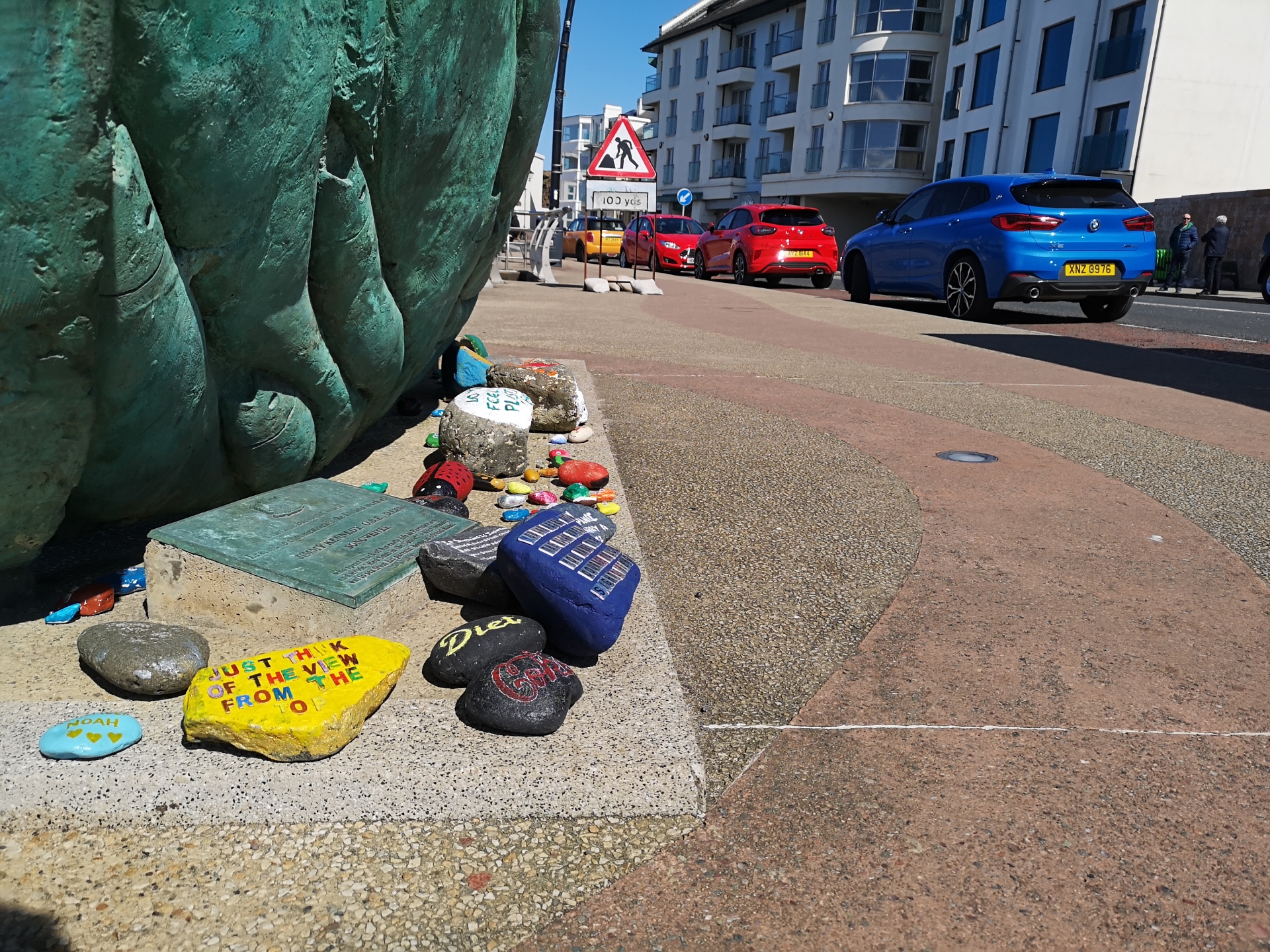 Painted rocks bring messages of hope on the promenade as traffic passes by.

With the hospitality still smarting from 18 months of inertia, Danny is hopeful the shackles will be taken off the recovery very shortly.

“It's been a long, long time closed for the industry and no matter how much you try to save, you still need your electric on, the CCTV running, your freezers running,” he says.

“You need to do your maintenance and cleaning, keep your insurance running, and all those things cost money.

“We've already missed Easter, St Patrick's Day and the season along the north coast is only really getting going at this stage.

“The big thing coming up in May would have been the North West 200, which will be another massive loss to this area, but it's important that we all cautiously get back to some semblance of normality.

“We anticipate we are going to trade reasonably well over the summer.

“This is a tourist area and people aren't getting abroad, so they'll holiday at home,” he added. 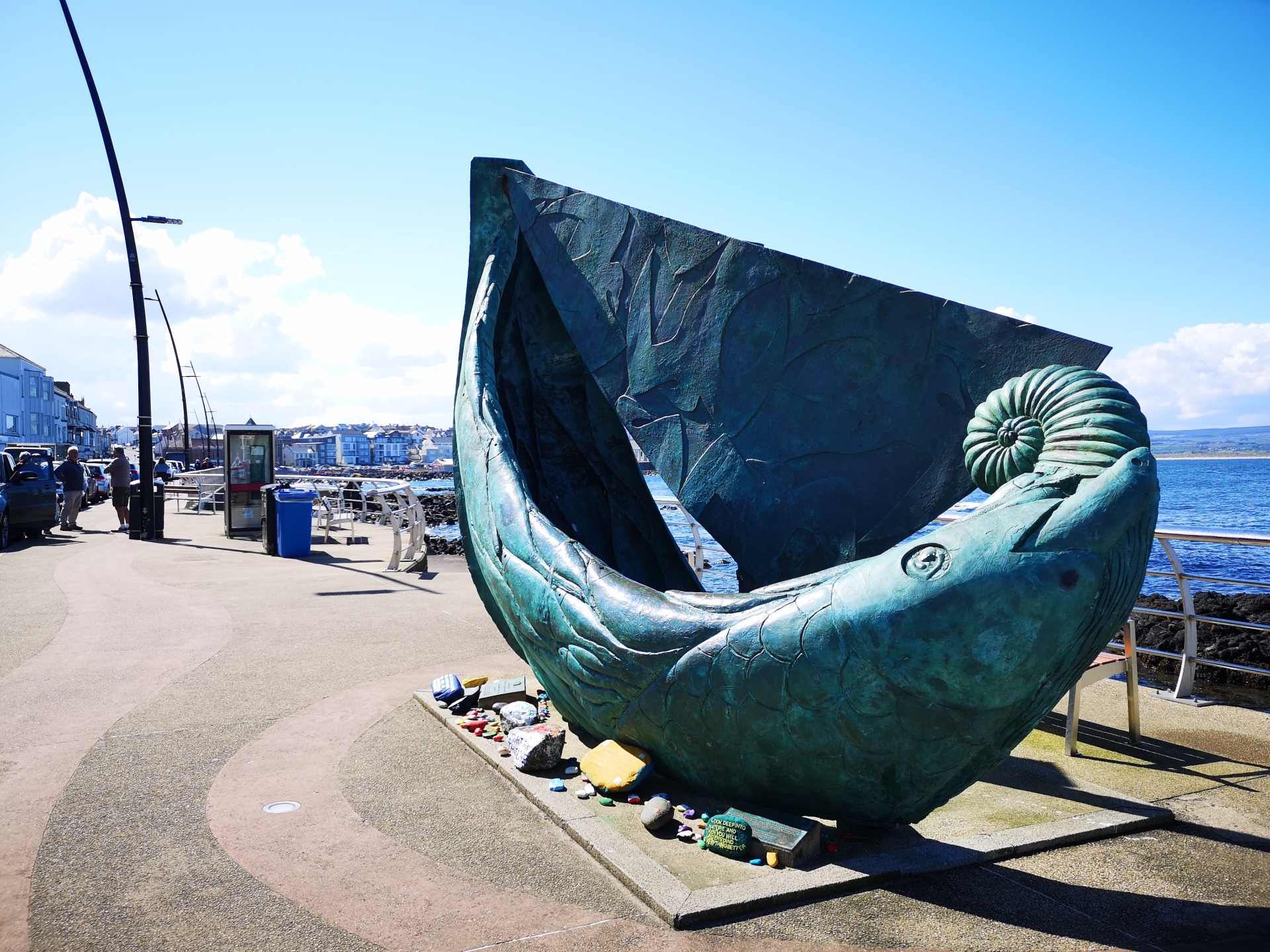 Garlands of colourful knitted decorations have been hung along the length of the promenade's railings, the fruits of the Portstewart Knitwits' labour over the last week.

They are attracting approving glances from passers-by, and their audience will only get bigger as the summer months progress.

On the north coast, a rising tide of optimism is shifting attention from the past to the future.

A collective crossing of fingers is hoping it stays that way.