LIFE IN LOCKDOWN: Relief drawing nearer along the Loughshore

The sun is already raising hopes of a sporting summer. 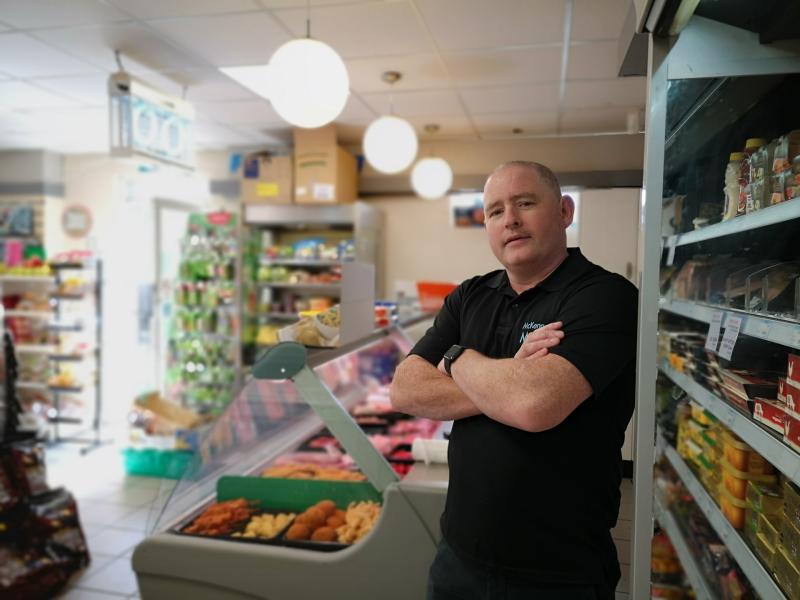 There is a single car parked outside the Bridge Bar when I pull into Ballinderry. It's not open, but I allow myself a brief day dream of a secret shebeen by the riverside.

A sign tells me CCTV is in operation. It has no doubt been a while since it captured anything other than passing cars and pedestrians on the footbridge.

A harras of horses are grazing on the banks of the Ballinderry River, spread out as if social distancing. The reflection of nearby trees is distinctive on the river's clear water.

In the distance, the floodlights of Shamrock Park rise above the landscape, silhouetted against a hazy sky.

Water plateaus underneath the footbridge before cascading downstream towards Lough Neagh through rocks hidden beneath its surface. 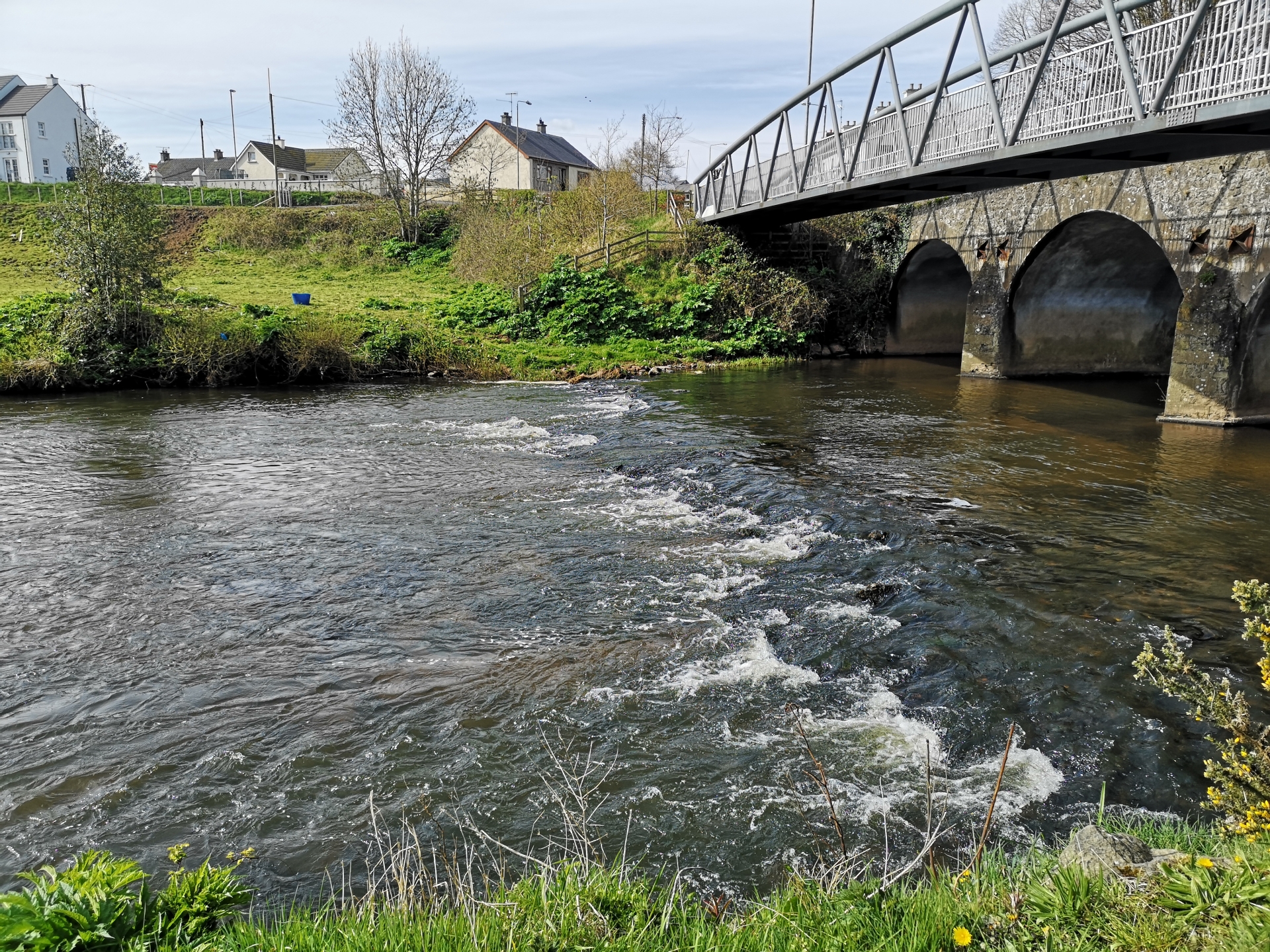 A row of new houses has been constructed at the top of the river bank, looking out onto the river's valley. The view is picturesque.

Signs erected by the local angling club advise passers-by on the salmon and trout on offer in the river, oblivious to the sporadic traffic passing over the original bridge above.

The unmistakable sound of studs on tarmac carries from the club car park as I make my way past, one player getting in some extra work. I hope for his sake there is a bag of footballs in the boot.

Walkers are dotted around the pitch's walking track. Lone power walkers. Parents pushing prams. A woman in a nearby garden is hanging out the washing.

It's warm and breezy; a fine drying day.

The lights on school road signs have been flashing over the last few weeks as pupils made a welcome return to the classroom. 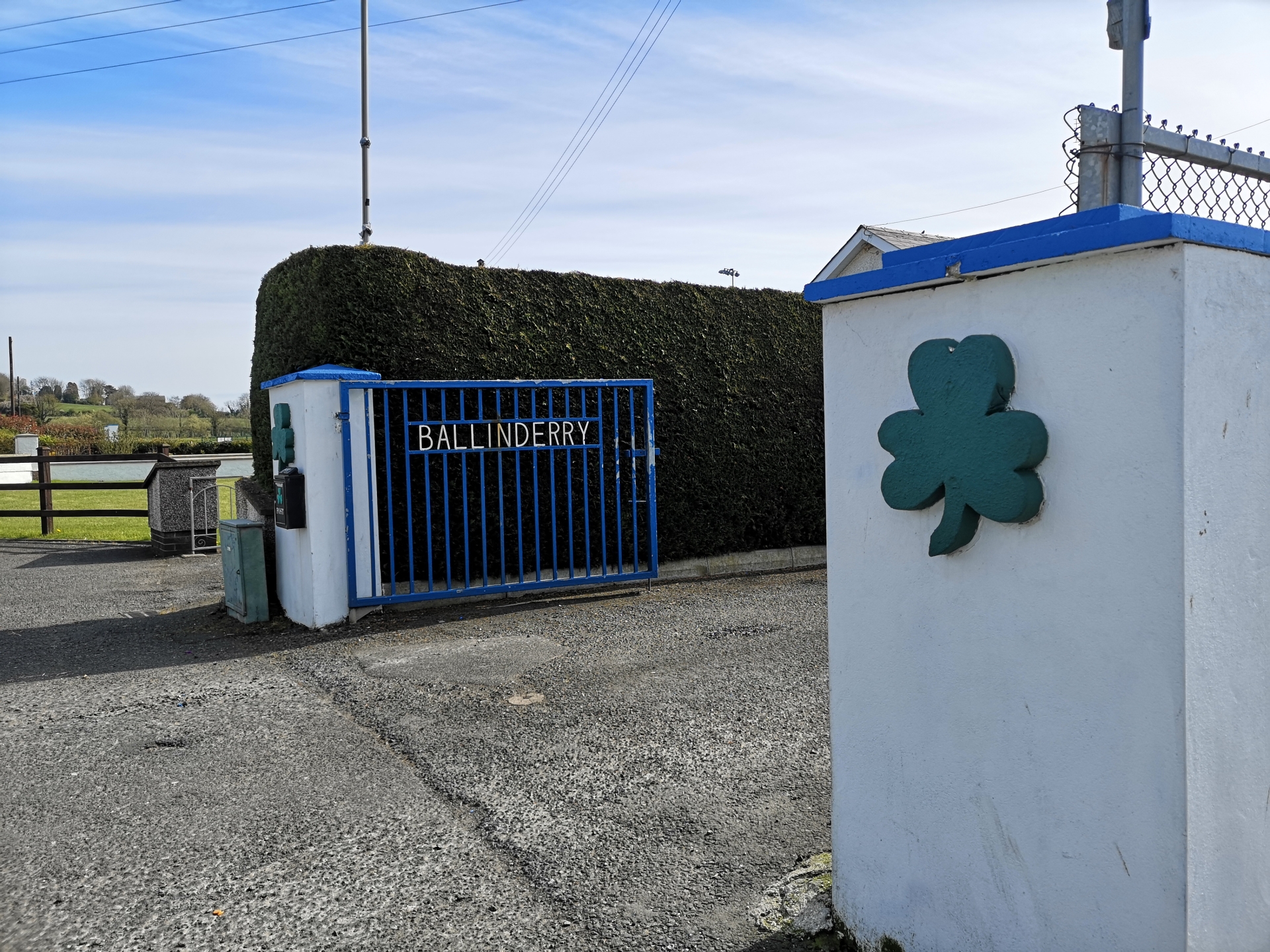 The entrance to Shamrock Park. Kevin McCrystal is looking forward to getting back.

Opposite Derrychrin Primary School, one local shop owner has mixed feelings about the easing of lockdown.

“I actually like lockdown because it keeps people local,” says Maurice McKenna, owner of McKenna's Mace.

The Moortown native is standing next to the butcher's counter, still filling the trays ahead of what could be a busy weekend.

“The butcher's has been busy throughout. It was unreal last year with people barbecuing and the weather is geared up for it again today,” he tells me.

“We've been good and sharp over lockdown, but with restaurants and stuff opening now it'll cut that down a bit.”

The recent weather is bringing the barbecue aficionados out of hibernation, but it is also lifting people's spirits, buoying them after over a year of bad news.

“The start of the year was dull, damp and depressing, for me included. Business-wise, it was alright, but there was a real depression.

“We get the same customers all the time and they were feeling it too, it was the same sort of thing. Ballinderry has responded well though.

“They've run different things online, like the bingo and other bits and pieces the club has run. You have to get used to it and adapt to it.” 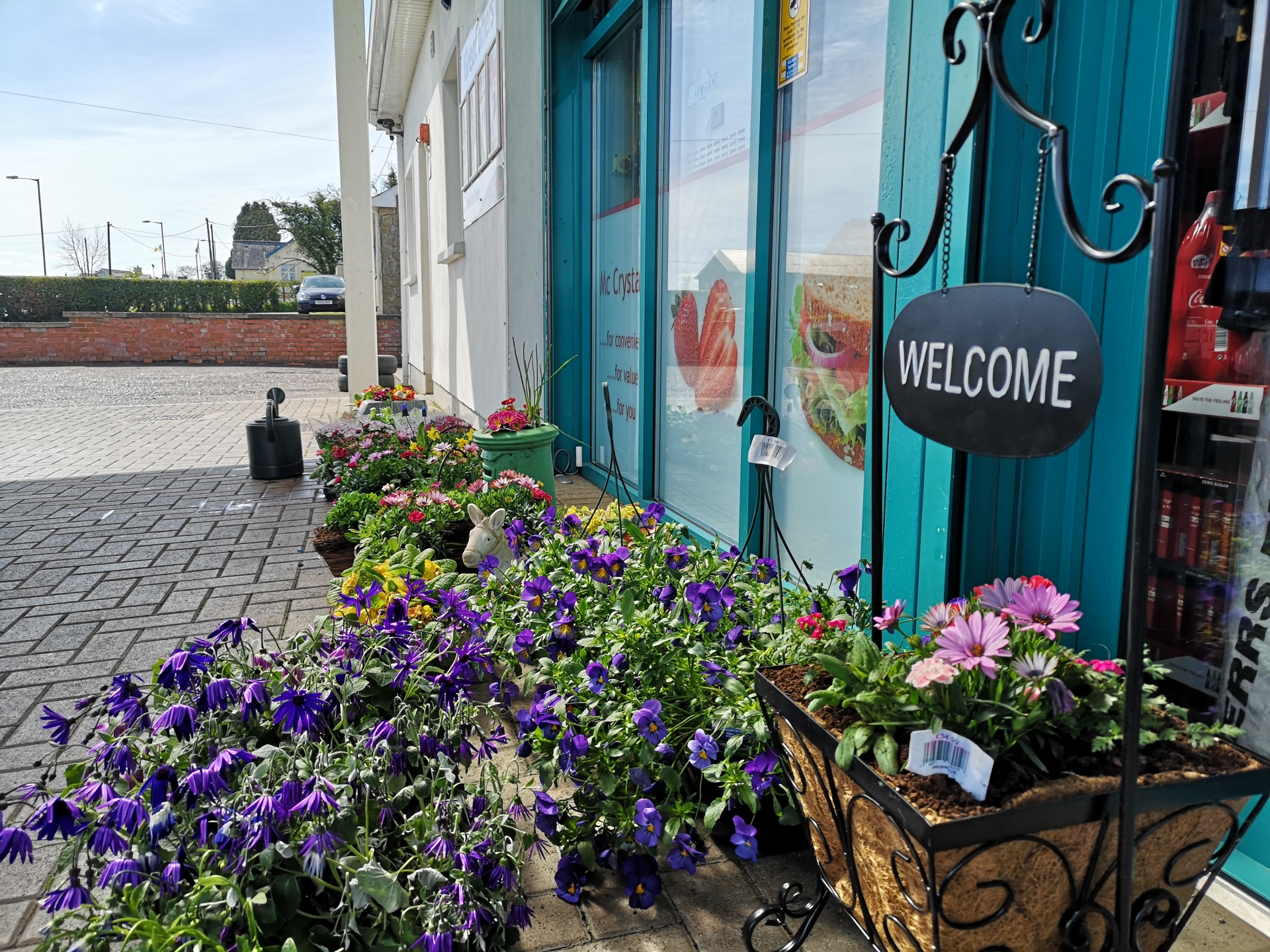 Vaccine numbers have featured highly in coversation over the last few weeks, and its successful roll out, alongside the recent relaxation of restructions, is having a positive effect.

“As far as the vaccine goes, fire it into you,” says Maurice.

“The news has only really come out yesterday, but through time people will start to bounce back. They'll be looking forward to the haircuts again – I'll not need it though, I'll be alright!

“I'm looking forward to a wee holiday; I think everybody is in the same boat. A couple of days away would be great, we'll see how it goes.”

Down the road in Ballylifford, Kevin McCrystal smiles as I tell him I've been to see Maurice, a big Tyrone GAA man.

“You always get that rivalry with the football, but it's only for banter and it doesn't go any further than that,” says the owner of McCrystal's Filling Station.

“You miss that. You'd get it on a Sunday evening or maybe a Monday morning. Sometimes the football match is replayed again, but you can't get a different result.

“You get the post mortem too. Everybody has a different take and then the referee gets it in the neck.

“They've started the training this week, so it'll take a while for everybody to get back into some sort of physical shape.”

Kevin is starting to see the effects of lockdown's easing, and like Maurice, says the early part of the year was bleak.

“You get used to it, but they were dull months. The weather wasn't great and the mood generally was a bit low,” he says.

“It's starting to pick up now. The schools are back, and with the change in the time, it's getting busier. They've opened up the sport now, so that generates a bit more movement too. 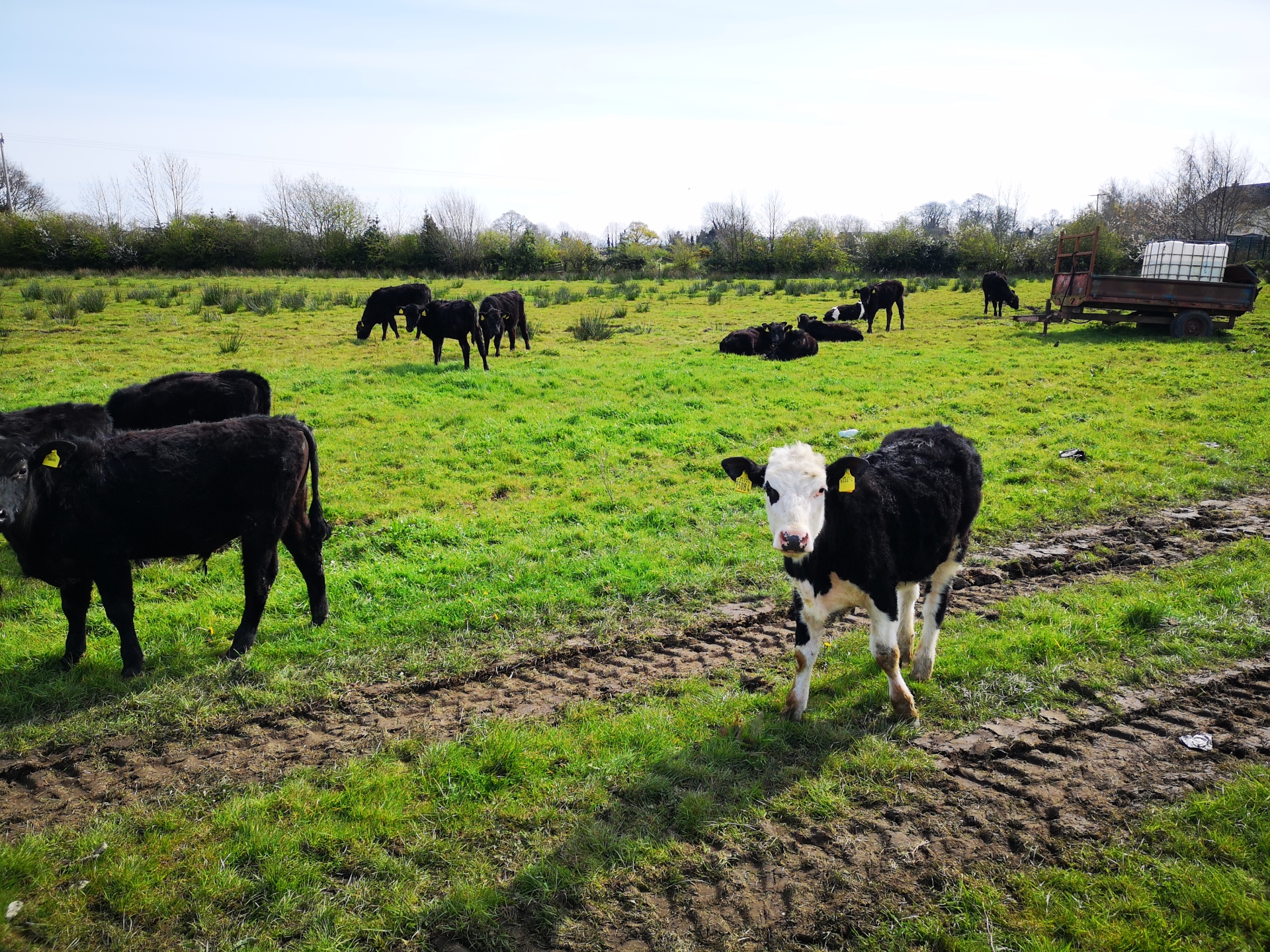 "What are you looking at? Away on."

“On a day like that there, whatever it is about the sun, it picks people up. The vaccination will help things too.

“It'll give people a bit more confidence and help them feel safer. It's not to say you won't get Covid, but hopefully if you do it won't have has big an impact.

“We're just hoping to get back to what we call the norm.”

On a day like this, the sun brings the best out of Lough Neagh, and the drive along the Loughshore is a pleasure.

The last week has brought a palpable difference to people's psyche. There is more optimism, more joy, more anticipation.

For the GAA and sport-minded, there is pure relief. Talk is turning to the summer and how clubs will fare.

Hospitality have dates. Hairdressers and barbers are sharpening the scissors. Racks and shelves are being stacked.

The midfielders are starting to jostle. Hopefully it won't be long until the ball is thrown in.