FEATURE: The County Derry company who met the Covid challenge head on

Bloc Blinds overhauled their entire business model to support the fight against Covid. 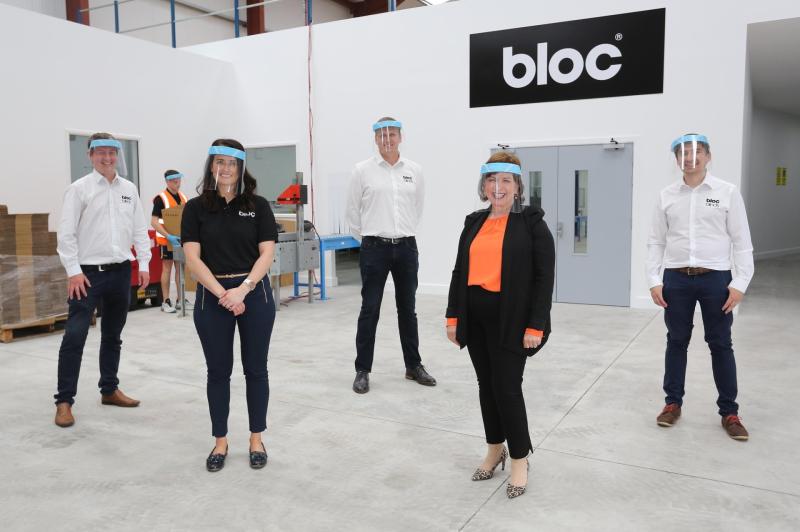 A year after restructuring their business model to service the growing demand for Personal Protection Equipment (PPE), Liam Tunney speaks to Bloc Blinds' Operational Manager Damien Burns about those frenetic early days, moving to Meadowbank and having a baby amid the chaos.

In early February last year, Covid-19 was still an unknown quantity. In fact, its scientific name had barely been uttered. It was known simply as the coronavirus.

All around, the banalities of life trundled along. People were still blissfully unaware of the storm slowly creeping across the globe.

At this stage, in Ireland and the UK, it was still the subject of parody, internet memes and flat out denial.

Damien Burns, though, was paying attention.

The Operational Manager of Bloc Blinds couldn't have foreseen the pivot that would dramatically change the face of the business, but he wasn't completely unsighted.

“I was reading the news and seeing what was happening over in Wuhan,” he told the County Derry Post.

“As every day went on, it became more prominent in the media and I did start to get some concern that it was a big deal, but we'd no idea what the long-term effect was going to be.

“Never in my wildest imagination did I think what actually transpired would happen, and I don't think anybody did.” 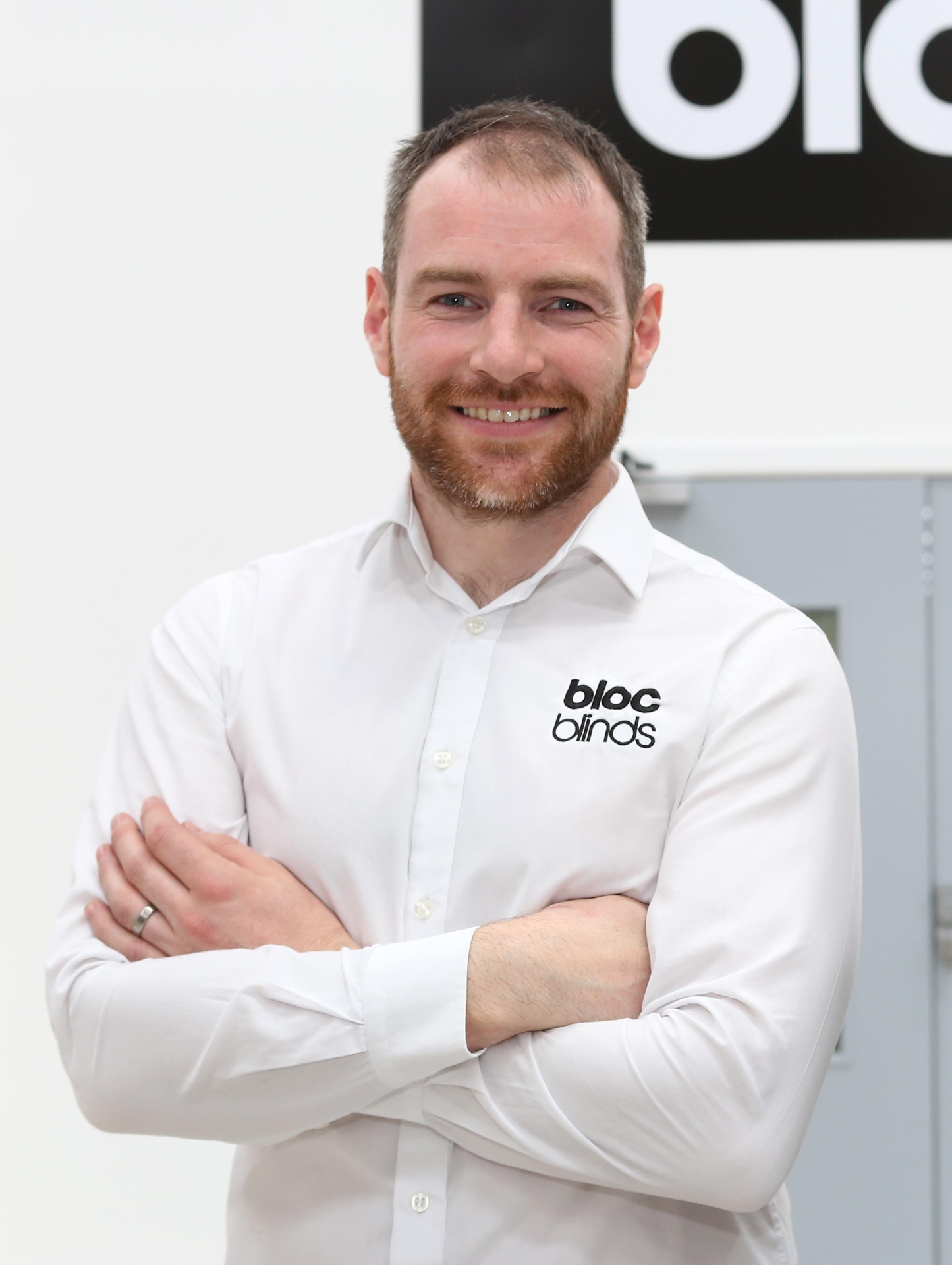 As panicked shoppers began to strip supermarket shelves of pasta and toilet roll, Damien, and the rest of the Bloc Blinds senior management team, were trying to navigate uncertainty.

In the absence of clear guidelines, schools and businesses began to take matters into their own hands, and the company were finalising their own arrangements when Boris Johnson intervened.

“On March 23, when the Prime Minister's speech was made, that's whenever we halted our operations and said we'd keep all our staff safe by following the advice,” said Damien.

“We just stopped. It was absolutely surreal. Everybody was waiting for it, but when it did happen, it was very surreal to think that we just couldn't do it any more.”

With the country reeling from the Prime Minister's 'stay at home' message, demand for the company's primary product – blinds – ceased almost overnight.

Rather than hunker down for the viral winter, Bloc Blinds came out fighting.

“We were in the next morning,” said Damien.

“We'd been told blinds, basically, were not important, and as peculiar as this sounds, we completely agreed, but we still had a company full of skilled staff.

“There was a group of us internally here and we'd seen some information about where help was required.

“We started to look at some of the products that were being mentioned and we picked out a visor. We checked if we could get our hands on one of them and it escalated from there.” 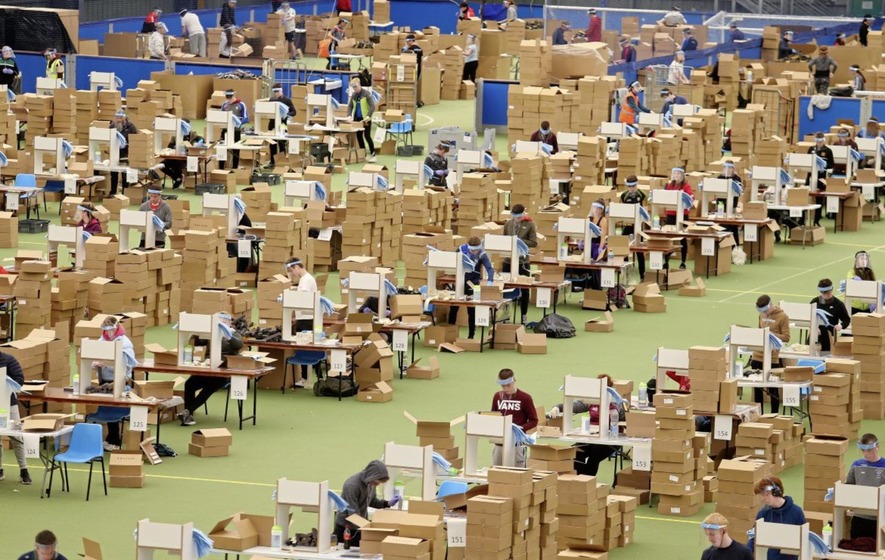 Meadowbank Sports Arena, where Bloc Blinds relocated in the early days of making their visors.

'Escalated' is a fairly modest way of putting things. Within weeks, the company had pivoted their entire business model and procured a 100,000 sq ft temporary facility.

After deciding on their product and sourcing materials, Bloc Blinds needed the space in which to operate safely, within the specific Covid guidelines belatedly laid out by the government.

The solution lay within a mile and a half of their company headquarters.

“The move to Meadowbank [Leisure Centre] was driven by the safety aspect,” said Damien.

“We were in pandemic circumstances and had moved to a product that was now an essential service. We didn't need loads of equipment, but we did need vast space to keep distance between everybody.

“We had a chat with the Council and everything had to be done quickly. Any challenge we met at that point was overcome, and we continued.”

The unnerving circumstances of the pandemic and the unusual work setting helped foster a real sense of togetherness within the company following the move to Meadowbank. 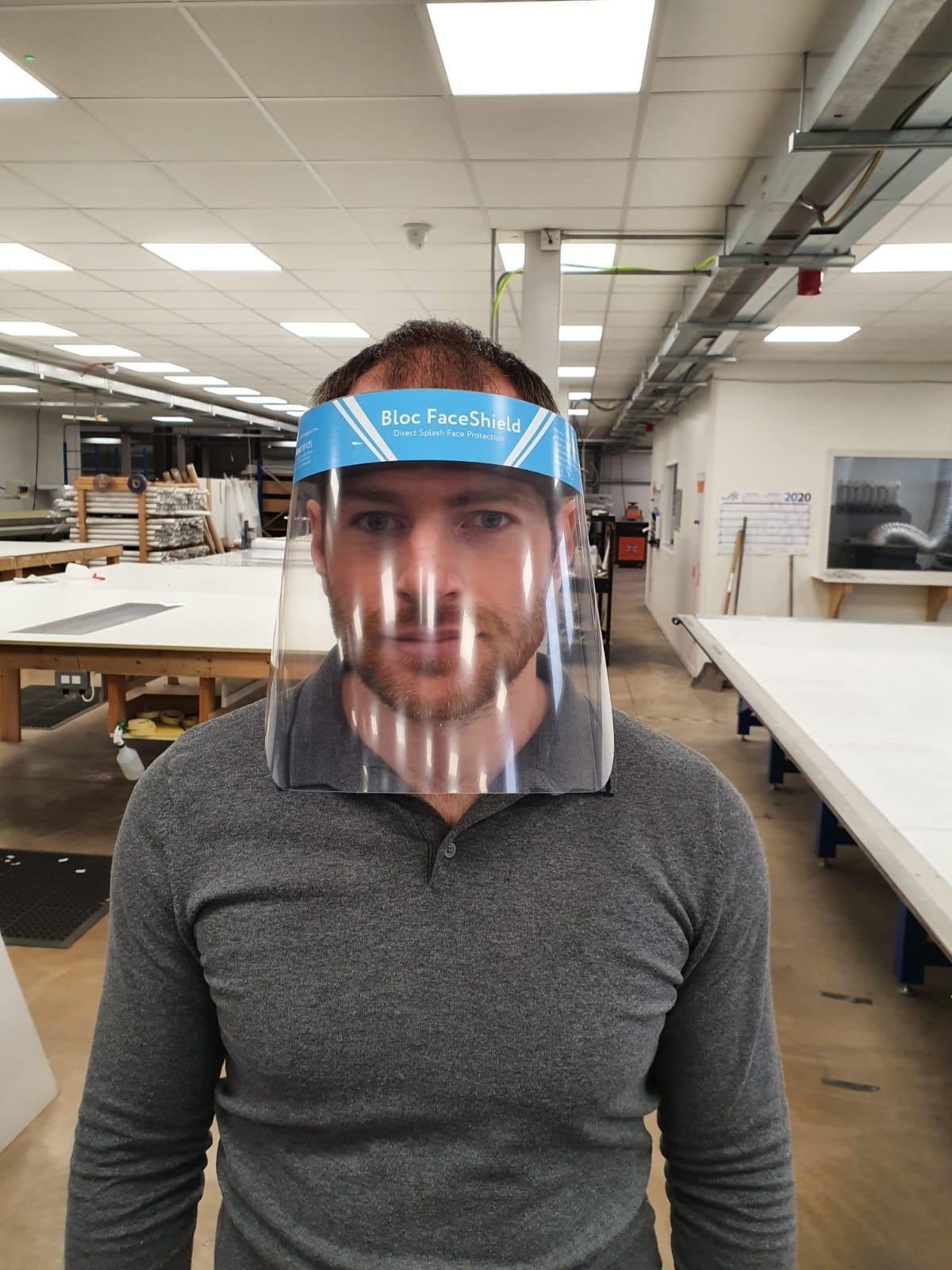 Damien said a sense of responsibility was also fostered by the incessant news cycle of cases, death and scenes from inside healthcare settings.

“We didn't have three weeks to sit down and work things out, we had to work on our feet. The job needed to be done right, because it was going to a ward somewhere,” he said.

“Every single visor that we made could have been worn by someone within a day. It kept everybody going.

“It was an interesting atmosphere. There was undoubtedly nervousness. We were unbelievably confident in what we were moving towards, but there were unknowns.

“As every day went past, we grew more confident. The product was well-received and we just continued to move forward from there.”

In a bleak economic climate, with many workers either furloughed or laid off entirely, Bloc Blinds provided a ray of hope, employing an extra 220 staff in late April to help the operation.

The demand for PPE continued to soar throughout the first wave of the virus, and the company opened a new facility in July, with a dedicated clean room inside the building.

Although not dwelling on the fact during the whirlwind of last Spring, Damien and the rest of the Bloc Blinds staff could feel history's hand throughout.

“As the operation expanded, we got the feeling what we were doing was special,” he said.

“We didn't have loads of time to reflect at that point though, we just had to keep going forward. We had the demand to service and had to treat it like any other operation.

“The best reflection happened later, when we transitioned out of Meadowbank into our new facility and we look back at the pictures of what Phase One became and were immensely proud.

“It was a great thing to do at that point and everybody had made it work, they bent over backwards. It's great to have all the pictures to look back at.”

Damien had his own challenges to balance with the relentless pace of the working environment. In May, his wife Lisa gave birth to a baby daughter, Fiadh.

“That was a challenging part to add to everything else that was going on too,” he said.

“There was an enormous amount of organisation to make the process work, and then at home, my daughter was born in May.

“There was a real short window before she was born, so the lead up, and the weeks afterwards with another baby in the house, was very challenging.

“I took a step back when it got closer to the due date and the few weeks after that, but it was hard work balancing the two.” 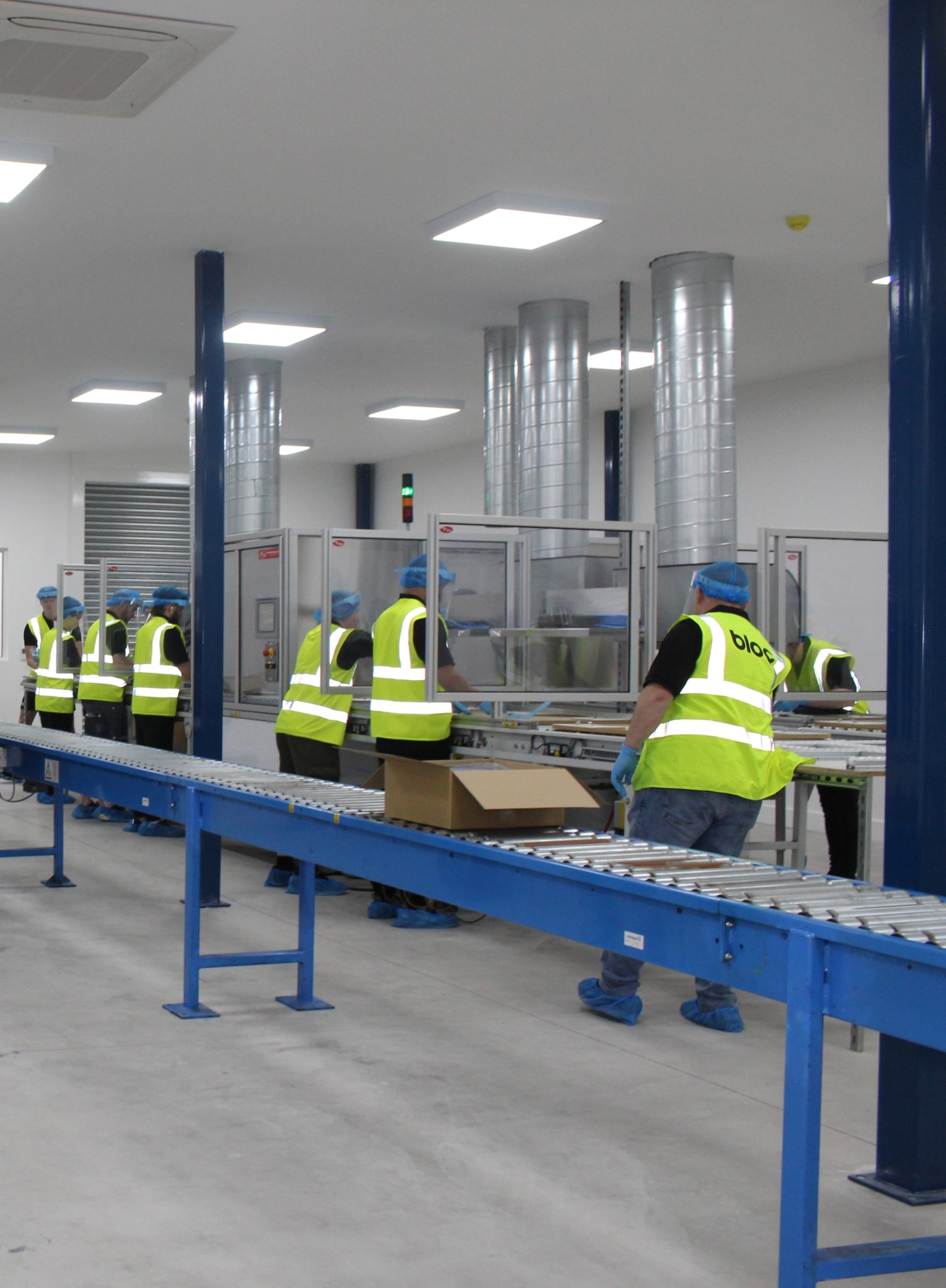 Staff hard at work in the company's new facility.

Some of the company's staff transitioned back when the blinds operation recommenced, but Bloc Faceshields continue to be manufactured in their Magherafelt base.

With that dedicated PPE facility still in place, they are hoping to provide contract healthcare solutions, keeping permanent jobs in the Mid Ulster area.

Looking back on the past 12 months, all involved in the process can look back with a great deal of pride in what they have achieved.

“It was in its infancy then, but now we know how many people we've helped and how much product we've created over the course of the year,” said Damien.

“We could have hunkered down, but what's the point in us sitting at home? Nobody else at that point was doing anything, so why did we have to wait on someone else to make a decision.

“On TV and online news, we can see images of our visor still being used, still circulating, still there, and that's down to everybody from the local area who worked on it from that early stage.

“An enormous amount of work was ahead at that point, but we weren't afraid of that challenge. There were people we knew working in hospitals that didn't have any PPE to put on.

“Everybody knows a nurse, a doctor, or someone who was directly feeling the effects of the virus and that's why we kept going.