Tommy Hughes eyes the next challenge 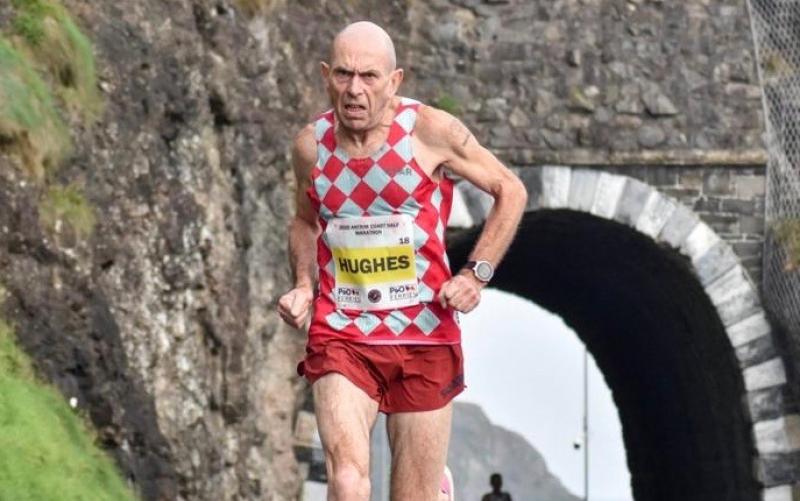 Lavey Olympian Tommy Hughes is the fastest Masters' runner in the world, over both 5,000m and 10,000m distances, but is already lining up the next challenge.

Hughes, who turned 61 last month, received the perfect birthday present when he saw his name at the top of both rankings, which were recently released.

His 5,000m time of 16:47.59 – his chosen event at the Irish Masters' Track and Field Championships in Dublin - was just over a second quicker than Dan King of the USA and 11 seconds ahead of French runner Gilles Herman, who finished third.

Hughes' winning run in the 10,000m category came in December 2020 in Belfast, this time over two minutes faster than second placed Herman.

There are never that many 10,000m races, it is 25 laps of the track. Last season there were two, with the second one arranged by NI Athletics.

“It was a once off, with so many people missing racing during the year,” Tommy said. “Eoin (his son) was pacing me and we were trying for the World Records Over 60s, 10,000m on the track.

“The record was 33 minutes 50 (seconds), so I didn't quite make it. I was tired that day and still ran a decent run to see me ranked as number one last year, but I will give it (the World Record) a shot again sometime.

Tommy had planned to compete at last March's World Masters in Toronto before it was shelved due to Covid-19. Over the two weeks, he was set to run the 5,000m, 10,000 (both road and cross country) as well as the half marathon. 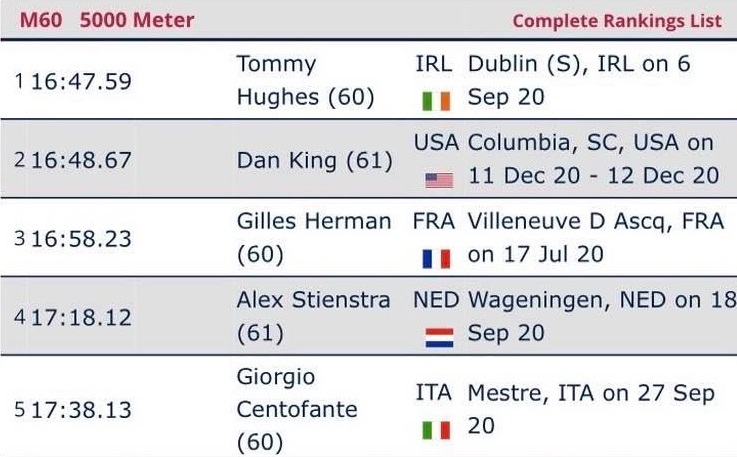 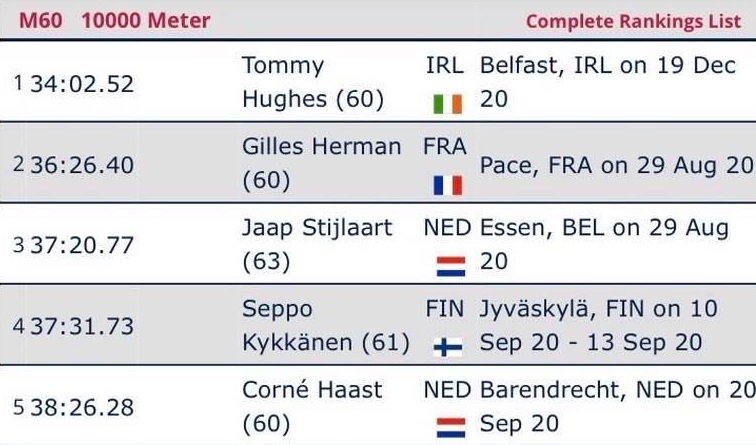 “I was looking forward to it big time,” Tommy said. “Now, when I see these results (Masters' rankings), it proved I can run and how well I would've done.”

The fact that Hughes' main focus is running marathons makes these results at shorter distances even more noteworthy. Many of the runners train in bursts and are able to focus on speed work. Tommy relies on his longer training keeping his engine tuned.

“I work off the long steady runs, because I use that for preparing for the marathons,” he points out. “I usually supplement that by doing races, that's what I love doing. It is tough at the minute, you are training and there are not many targets in front of you.”

“There are a lot of guys, who train for the track and they are doing 50 miles a week, at the most, whereas I am doing double that.

“They are going out and blasting with shorter training, with their rests in between. I am going out for longer periods of time.”

Along with Eoin, he holds the World Record for the fastest father and son marathon run in the world, at the Frankfurt marathon in 2019.

They have booked in to do the Wrexham marathon in April, if it takes place, and Eoin has already informed Guinness World Records' officials of their attempt to break their own record.

Last year's London marathon was their initial target for breaking their own record, but it was postponed and they have a deferred entry to London in October.

“We have to beat our own World record,” Tommy adds. “That's the plan for the next few years, to get a record that is hard to beat so it can sit there for a while.”

The duo were 20 seconds short of beating the record for a father and son half marathon record.

“That's out of our jurisdiction now,” he admits. “I am hoping for the Wrexham marathon in April and that's what I am training for now.”

Tommy and Eoin won't be alone, after starting up Strive Racing Club, based in Mid Ulster, with a focus on racing.

“A lot of us are going over to Wrexham, so there will be plenty of competition to see who is going to be the fastest in the club at marathon distance.

“I ran 2:30.02 and there are guys from the club out to beat that, so it is going to be competitive enough. There will be a bit of craic and a good run.

“Wrexham is limited to those faster than 2:40, so it is a kind of an elite field and it will be good for anyone going for fast times.”