LIFE IN LOCKDOWN: 'Keeping going' is important this time round in Feeny

People are taking the virus seriously in the County Derry village. 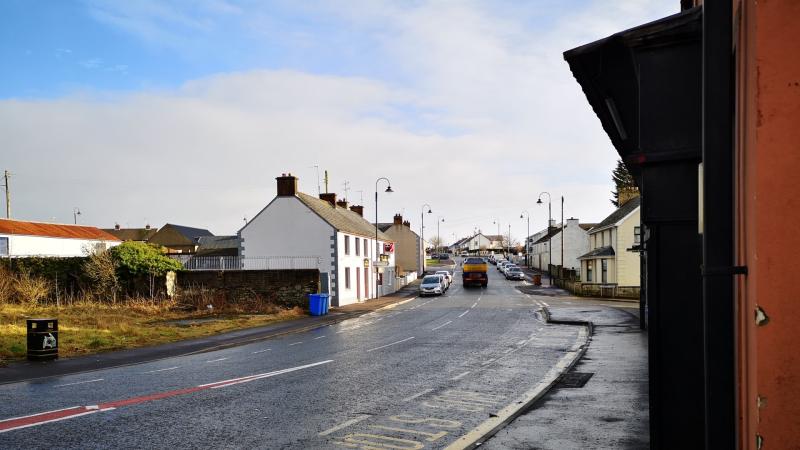 The village of Feeny.

My first impression is that it's quiet. Extremely quiet. The other places I've visited have been quiet, but not to this extent.

Just like it takes your eyes a while to adjust to new light, if you wait long enough, things come into focus. A Claudy Fuels lorry roars past and when it clears, there is movement.

A young boy in Banagher gear emerges from the Spar shop clutching a plastic bag. He hasn't far to go, and with a quick look either way, darts across the road and disappears into a house on Feeny Road.

At its heart, Feeny's main thoroughfare is a residential street, and the people who live there are staying at home.

Walking up the hill towards the GAA pitch, the sun briefly illuminates figures at windows.

An elderly man squints against the sun as he peers out his window. I catch glimpses of home-schooled children appearing at the windows as I make my way past.

The distinctive air brake of the bin lorry comes at regular intervals. One woman rushes from her house with a bin in tow, spinning it on the kerb before retreating back into her home. 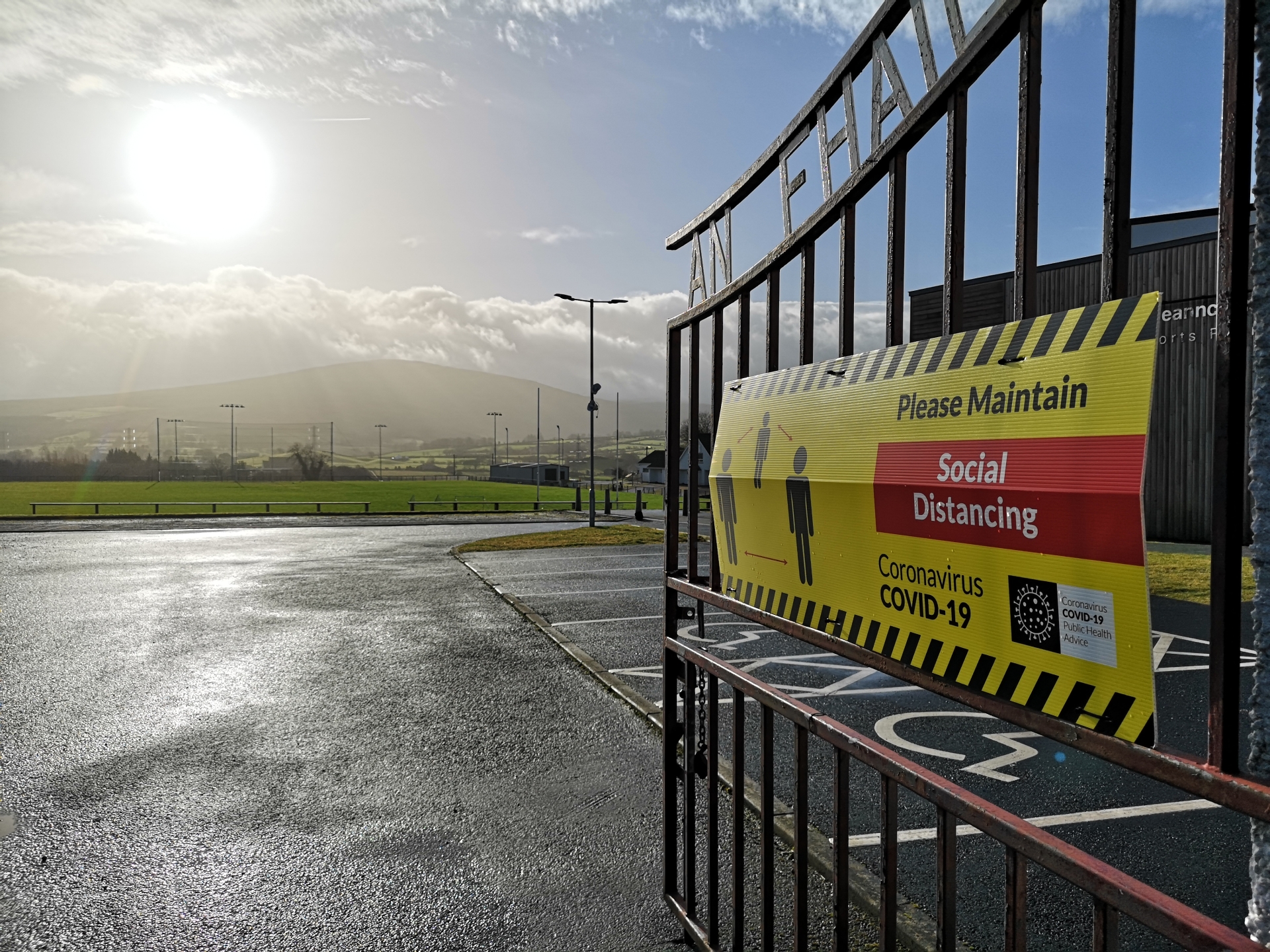 Covid-19 messaging on the gates of Fr McNally Park.

Smoke from internal fires wafts through the air as I reach Fr McNally Park, where the sun is breaking through the haze to create a spectacular backdrop.

The pitch is the first place of note you reach when you enter Feeny. It acts almost as a gatekeeper for the village, but its own gates are open.

There don't appear to be any walkers on the grounds though, and I head back towards the centre of the village, where cars are parked around its hub; the pharmacy, supermarket and chippy.

A man stops me in the pharmacy car park, asking if I know where he can find the boy that does the tarmac – McCloskey.

It's as near to the needle in a haystack conundrum as you will find. I wish him luck.

Outside Feeny pharmacy, a makeshift shelter has been erected to facilitate a socially distanced queue, but there is none today. 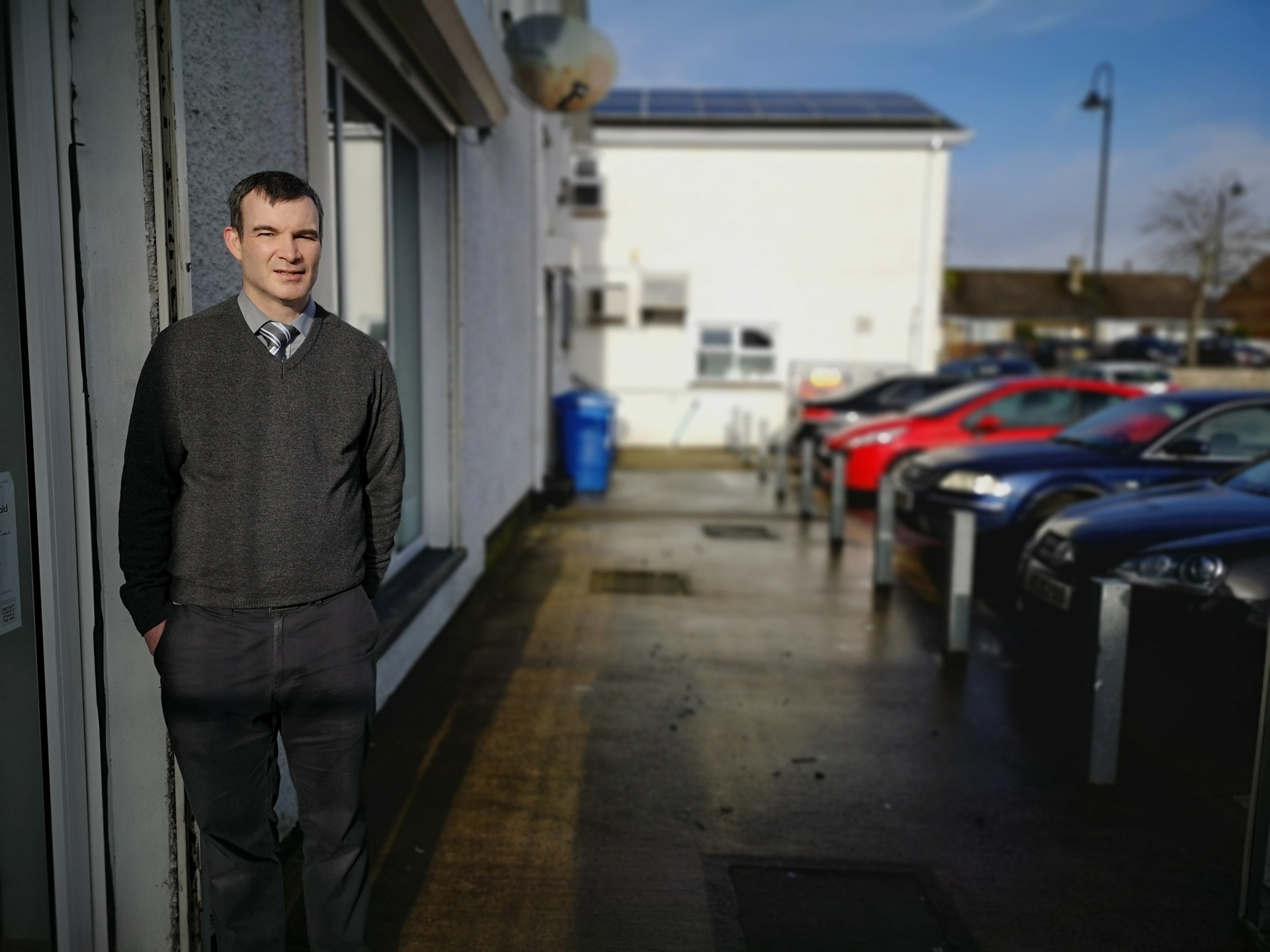 Owner Declan Bateson tells me this lockdown has been much quieter than its predecessors.

“After Christmas, it's been quieter. People are taking it seriously and have seen the surge in the hospitals,” says the '93 All-Ireland winner.

“In the run-up to Christmas it was very busy. Retail shops were closed for a while and with the pharmacy being allowed to stay open, it meant we were busier.

“GPs have tightened up who can come and they've had a lot less people going through their doors, which means a lot more people coming through ours.”

The pharmacy is at the centre of the village, both physically and metaphorically. Although he brushes off the notion of a pastoral role with modesty, it's clear this is the case.

“With the elderly living alone and feeling a lot more isolated, we are one of their few points of contact,” he says.

“We know everybody who comes into the shop, we know their families and we can ask after them. We're part of the community.

“We do try and reach out and have those chats, see if they are doing okay, or if we're delivering to them we can have a chat on the doorstep and see how they're keeping.

“It's always felt that way though. It's a small village, there are a couple of pubs, a local shop with the post office, ourselves and the doctors.

“The pubs have been closed and the doctors have been less available, so ourselves and the shop next door have probably been pivotal in keeping people going.”

All over, this lockdown has been very different to its initial version last Spring. Covid has come creeping in to the Feeny community like many across Ireland.

“We got lucky the first time round, there were no surges here, but in September and October you began to see local people testing positive. Reality dawned on people that this was serious,” he says.

“The lockdown before Christmas frustrated a lot of people, but in hindsight it was a mistake to let things open up again in the run-up to Christmas. It's cost lives.

“We would have had the odd doubter of Covid coming in during the summer months, but we don't seem to have them coming in any more.” 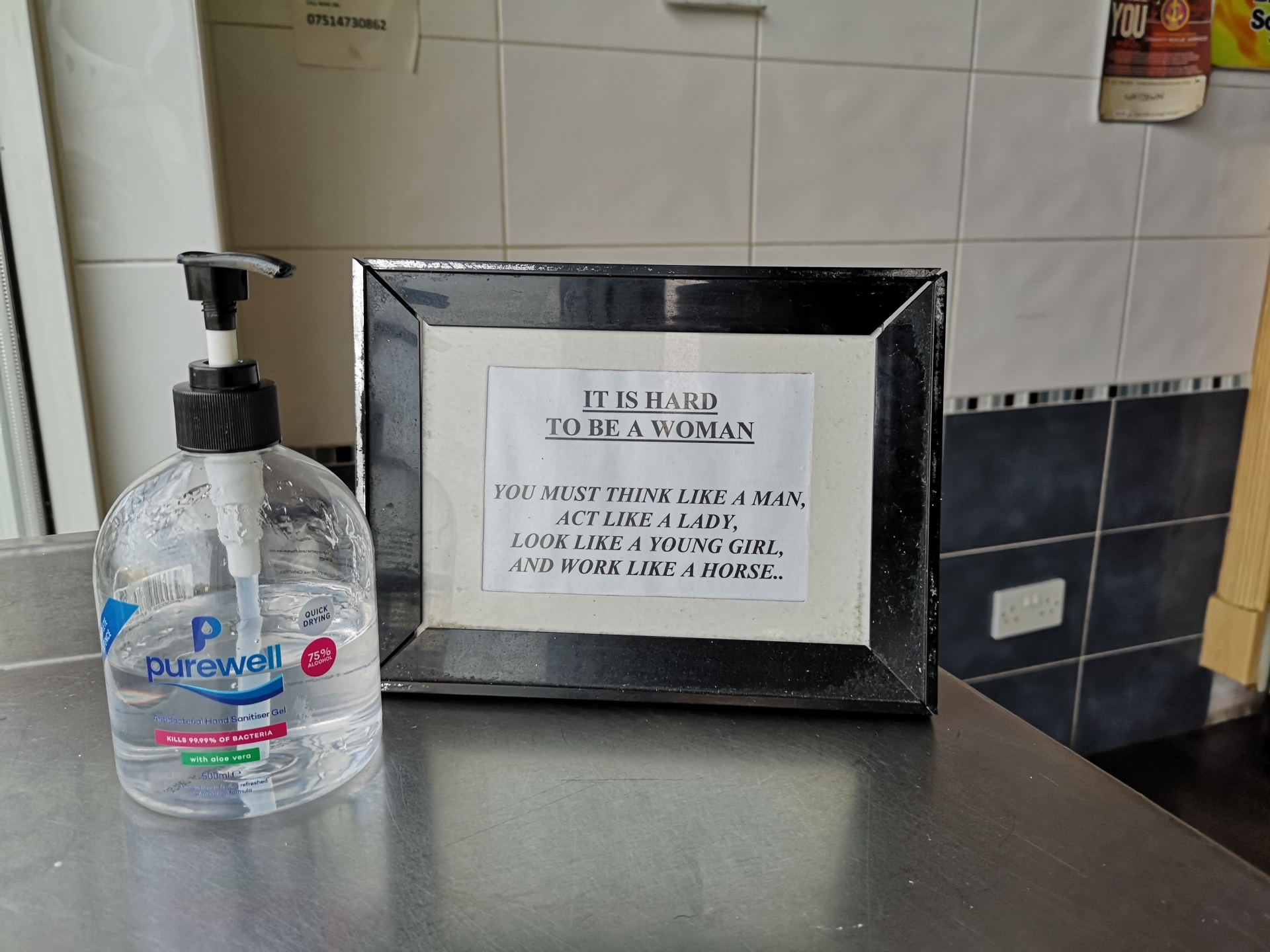 Next door, in Sizzles chippy, they are cleaning in preparation for the evening's business. The door is open for ventilation when I ask if anyone is around to speak.

Grainne plays the role of gatekeeper, listening to my reasons for disrupting their Thursday afternoon, before owner Marlene appears from the kitchen, satisfied with my explanation.

“There is no fortune being made, but at least we're surviving and looking forward to getting back to normal,” she tells me.

“You always worry, because you think 'will this week be okay?' It's stressful for anybody, but I feel sorry for people in the restaurant game.

“I always want to work, but sometimes if the government says you can't, then you can't. You're always concerned about your staff and customers.”

Marlene echoes Declan's analysis of how the virus has crept up on the people of the village.

“At the start it didn't really sink in, until people started to get unwell. You just didn't want to see loved ones get taken to hospital and you were watching horror stories on the news of it being fatal,” she says.

“The summer was great because you were home early in the evenings and there was nice weather. It's tough now on people's mental health, trying to stay positive.

“Since the schools closed, it's hard for childcare as well. It affects the whole community, but keeping going is important.” 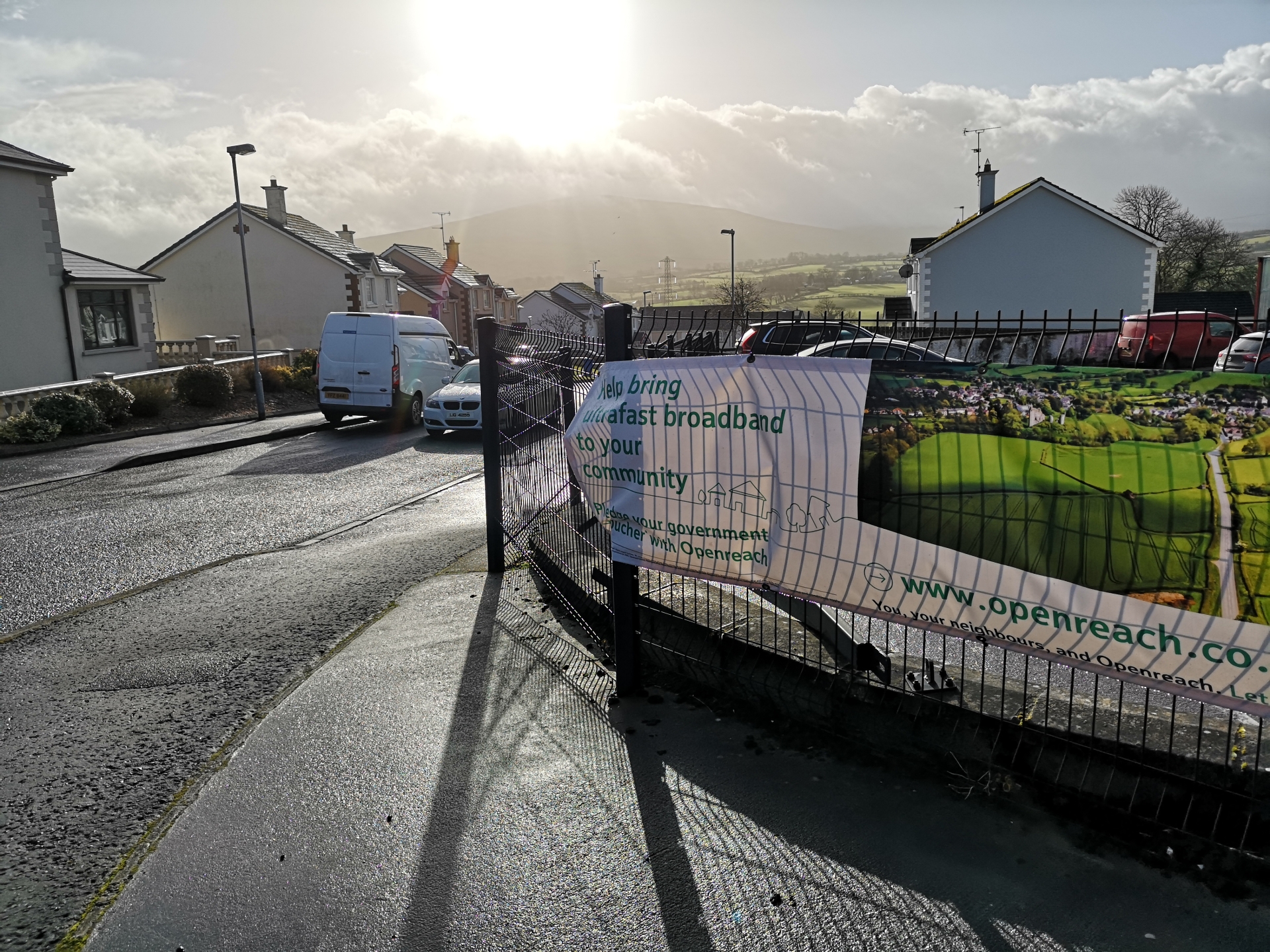 There is a big push to improve broadband in the area at present.

It is clear the business owners in the centre of Feeny feel a wider responsibility than simply providing a service.

Marlene says it's hard to lift people's spirits in such emotionally sanitised circumstances.

“Everybody expresses they're fed up, and we're all in the one boat, but you can't spend a lot of time because we can only allow one person in at a time,” she said.

“It removes that bit of banter between people, but that's the times we're in. You still have people who want to come in and stand and you feel bad asking if you can bring it out to them.”

“If one of us went down though, that's the whole team down and it has a knock-on effect.”

Birds are dancing back and forth across the Feeny Road as I make my way back towards the car.

I note the name of the pub – Sperrin View.

I take a moment to savour it, looking down Glenedra Road as the sun breaks over the Sperrins.

It's a pity no one will be able to experience it for a while.

On the way back out the road, I stop off at Banagher Glen, on the off chance any walkers want to share their lockdown experience.

I'm halfway down the narrow road when I'm waved down by two perplexed looking men standing outside a van.

“Do you know if Thomas Murphy's gravel pit is anywhere round here?” asks one of them.

I shake my head.

It's probably time I went home.