LIFE IN LOCKDOWN: Laughter the tonic in post-pandemic Draperstown

We begin our look at how the county is coping with the latest series of restrictions. 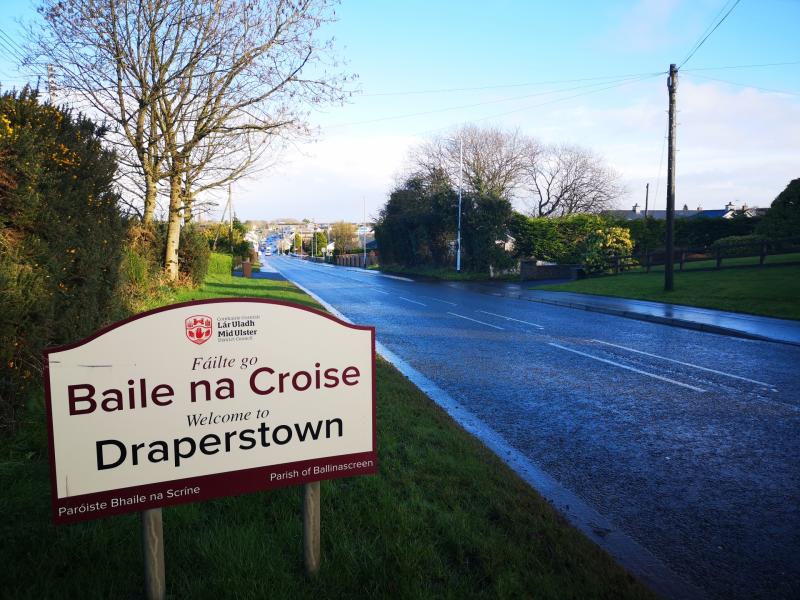 There's a global pandemic, the weather is brutal and I'm standing on St Patrick's Street with a notepad and a pen. The glamour.

This is all part of the editor's grand plan to assess pandemic-stricken County Derry and record what is happening in its towns and villages during the latest lockdown.

At first glance, it could be a tricky assignment. 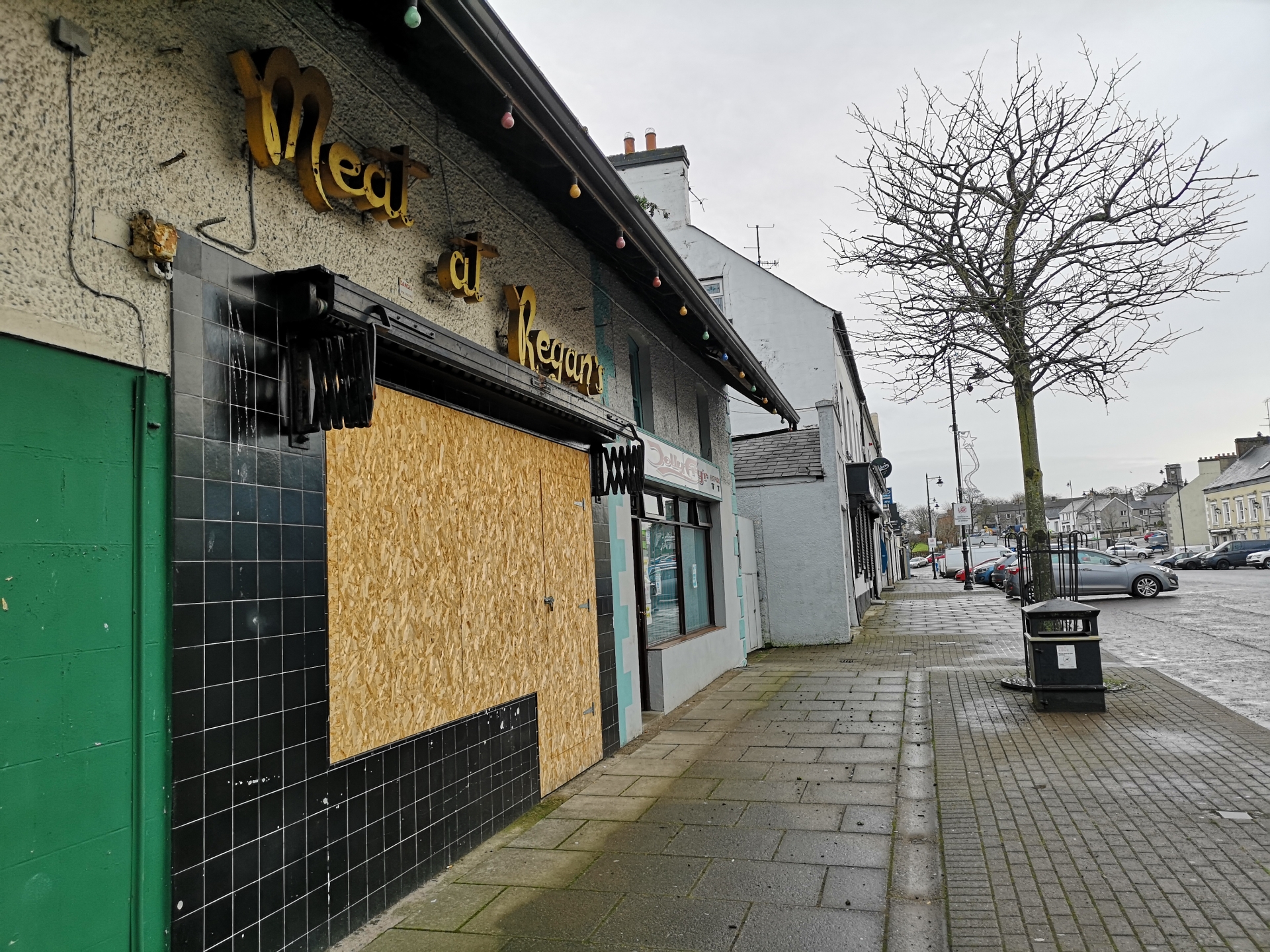 Some Christmas decorations remain in place in windows along the street, clinging onto the joy the pandemic threatens to sweep away.

The faceless mannequins staring from the windows of Burns & Co feel like they've been caught in a tragic, yet grimly fashionable freeze frame. Think Pompeii with blazers.

A painted horse peers out from the wall of the Half'n Hideout Bar. 'Born to Run' reads the caption underneath. The shamrock below serves as a stark reminder of when this all began.

People disappear and emerge from the Credit Union like wasps around a nest.

One man withdraws money from the nearby ATM.

He'll have to work hard to find somewhere to spend it in Draperstown today.

The NI Executive's latest 'stay at home' message hasn't become law yet, but there is plenty of evidence people in the town are already ahead of the curve.

As well as the supermarkets, the lights are on at the chemists, the dentist, Sperrin Electronics and the optician.

I call in on the way past, curious to know if they've experienced an upsurge of bored patients deciding now is the perfect time to get their eyes checked. 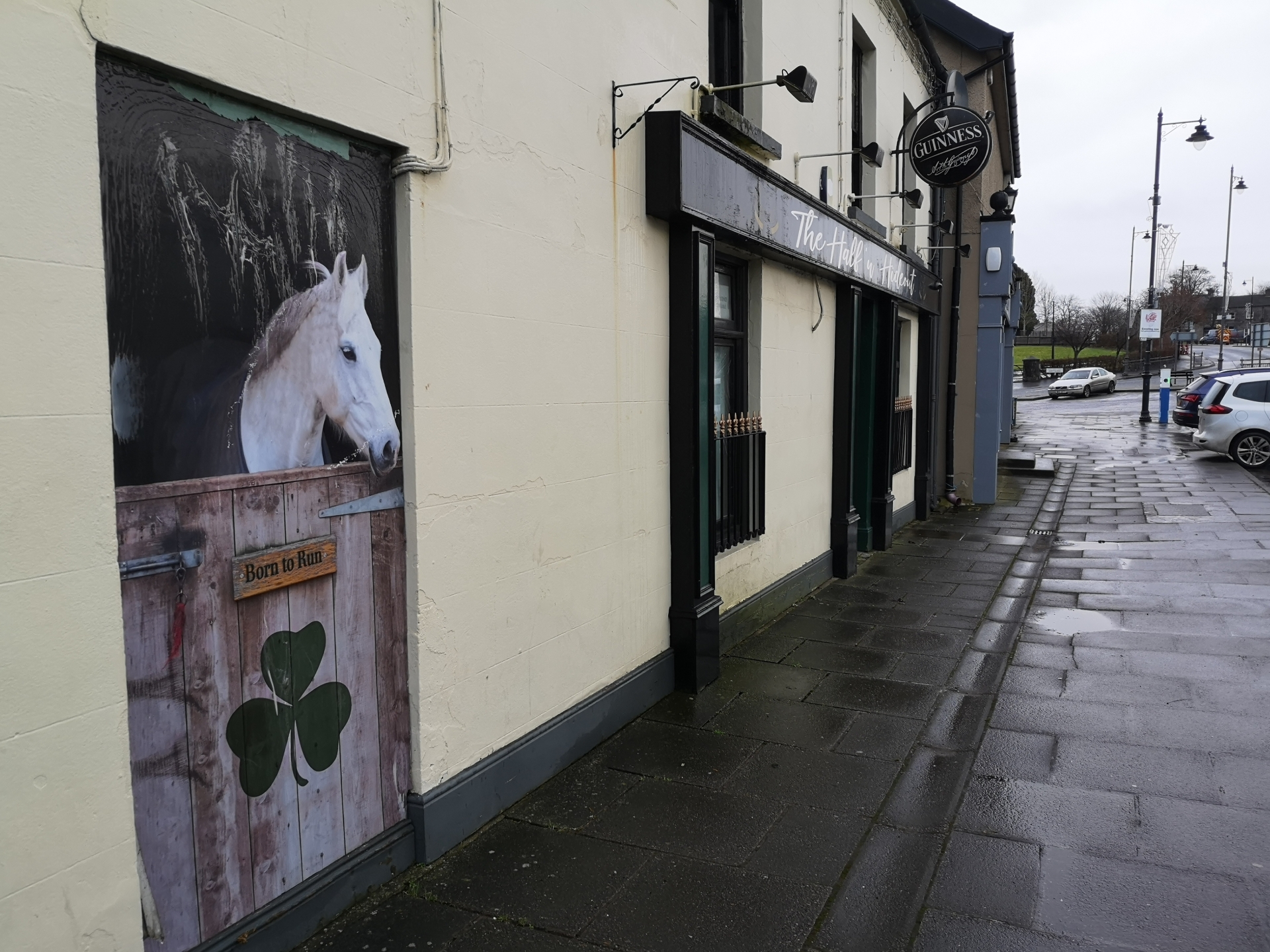 “It's been very quiet,” explains the woman behind the desk, who has been using the quiet time to get stuck into some administration.

“We've just the one appointment for Friday even. Normally at this time of year we'd have a lot more. You do miss people being about.

“The girls from Claire's Flowers across the way would be in and out. The town is very quiet now, but that's a good thing too, it means most people are not coming out.

“Some people can be so selfish.”

What she's referring to are recent reports of people who have tested positive and gone about their business as normal, carrying the virus around without any consideration of others.

There appear to be no such issues in Draperstown though, and compliance with safety measures is carried out with a smile, albeit only visible through the eyes.

There aren't many out and about the streets, but the traffic flow is steady, with numerous heavy goods vehicles making their way through the town.

Draperstown lies well into the Mid Ulster district, an area widely regarded as the manufacturing hub of the north.

It provides a gateway to neighbouring Tyrone – for better or worse – and lorries making their way up and down St Patrick's Street appear to be a common sight. 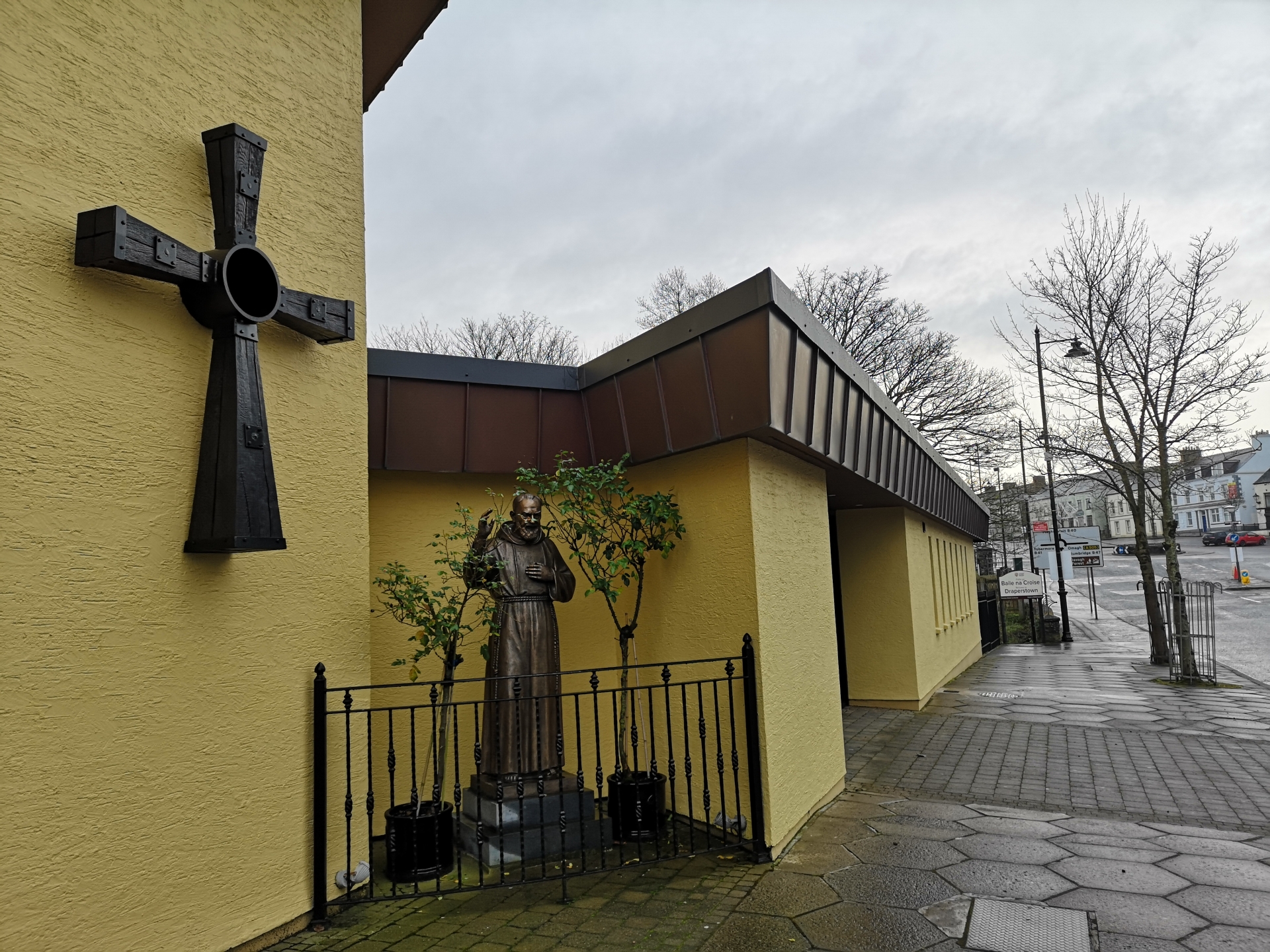 Even the church lay quiet when we visited last week.

A lorry bearing branding from cooking oil supplier 'Frylite' performs a truncated U-turn in the middle of the road. It's decided against going to Tyrone.

As it drives past I notice the strapline; the natural choice.

Heading out the Magherafelt Road, a lassie dog eyes me suspiciously from the bay window of a house, bounding back and forward as I pass by.

The mechanics at Ford-Fordson have a car jacked up and are deep in hushed conversation with a customer.

St Colm's and St Mary's schools are quiet too. There are cars in the car park, and a discrete gate lies open for access. The playground is empty.

A huge wall display at St Colm's celebrates the school's All-Ireland winning camogie team. When they won their title in March last year, Covid was barely on their radar.

Back on St Patrick's Street, there is a melody to the church bells that ring out as the clock strikes 12. You can hear it all the way through the town.

Sun breaks through mizzled rain, projecting a rainbow above the spire and causing those coming in and out of the Credit Union to instinctively raise a hand to their brows.

The chapel itself appears closed. The back door is completely locked, with separate entrance and exit doors clearly labelled at the front.

Both of the town's other churches have their gates locked as well. Out in Straw, next to St Colm's GAC, it's a similar story.

A woman parks her car and tries the door, before disappearing around the back of the chapel and into the graveyard. The playground of Gaelscoil na Spéiríní is also still. 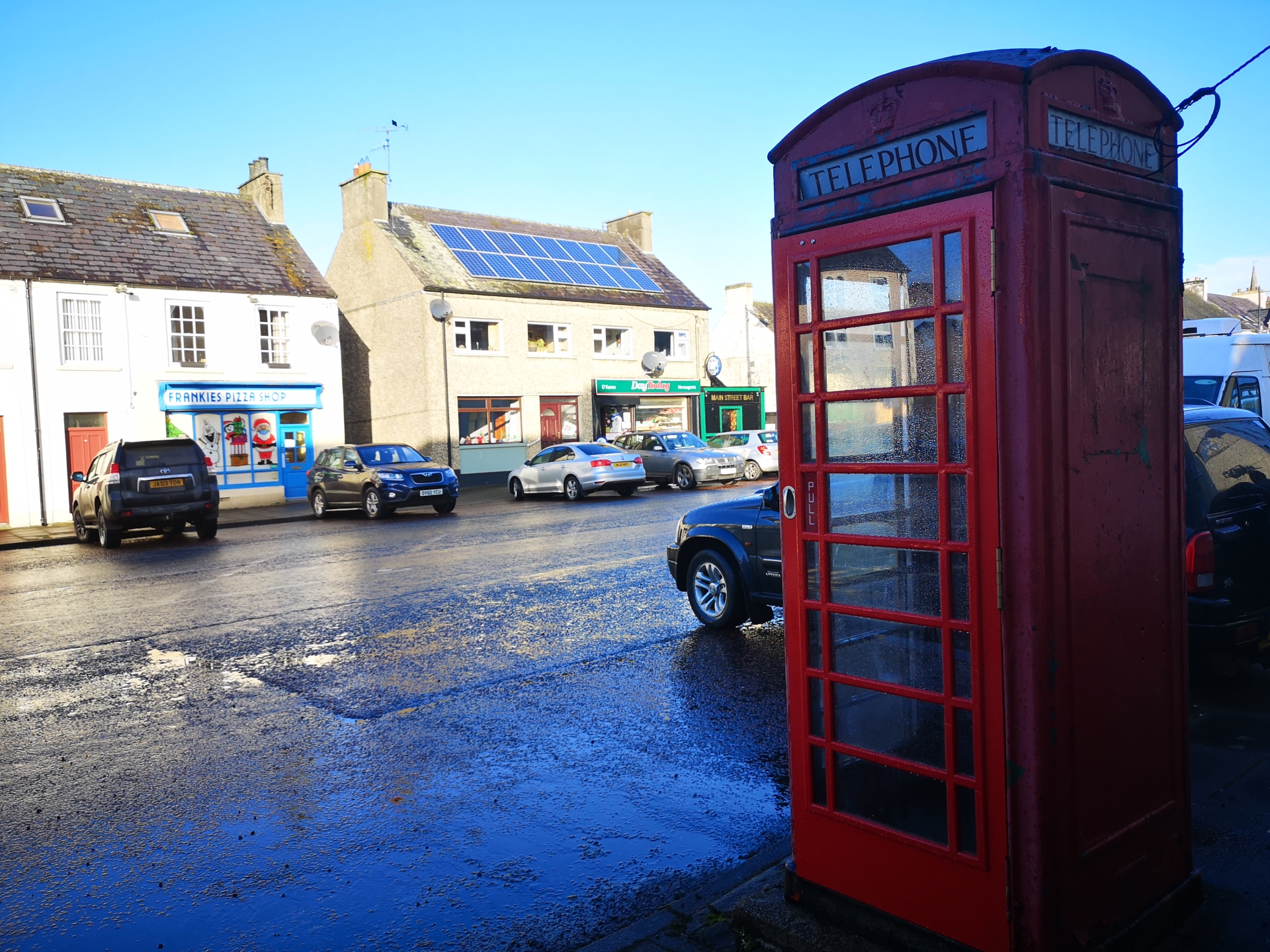 OLD AND NEW: The traditional phone box and shop front, with solar panels on the roof.

On the way back into Draperstown, I count three Openreach vans working in the town; one in Straw and one each end of St Patrick's Street.

That broadband will be even more important this week. Home schooling has resumed, and appears to be staying at home, as there are very few children in town.

O'Kane's shop has a traditional layout with the contemporary addition of roof-top solar panels, showing 'Screen's fondness for mixing the two genres. I nip in for a paper and a bottle of water.

The shopkeeper is arranging shelves behind the counter. He takes a moment to put down what he is doing and put on his face covering.

From the other side of the clear plastic screen that has become part of the furniture throughout the world, I remark how quiet the town is.

“It'll be even quieter tomorrow,” he replies.

Tomorrow of course, being Friday, the day the 'stay at home' message becomes law.

The town is part of Magherafelt's BT45 postcode, which last week posted the highest rate of Covid-19 per 100,000 of population in County Derry.

Its figure of 1212.6 was the fourth highest rate of all NI's postal areas.

In data collated by the 'Illustrate This' site, it ranked 10th across the whole of Ireland.

If you were just passing through Draperstown, you wouldn't know anything was different.

Traffic flows as usual, and closed-up businesses are unfortunately not unusual in rural Irish towns.

Spend some time sitting, watching, listening, however, and it becomes more clear. 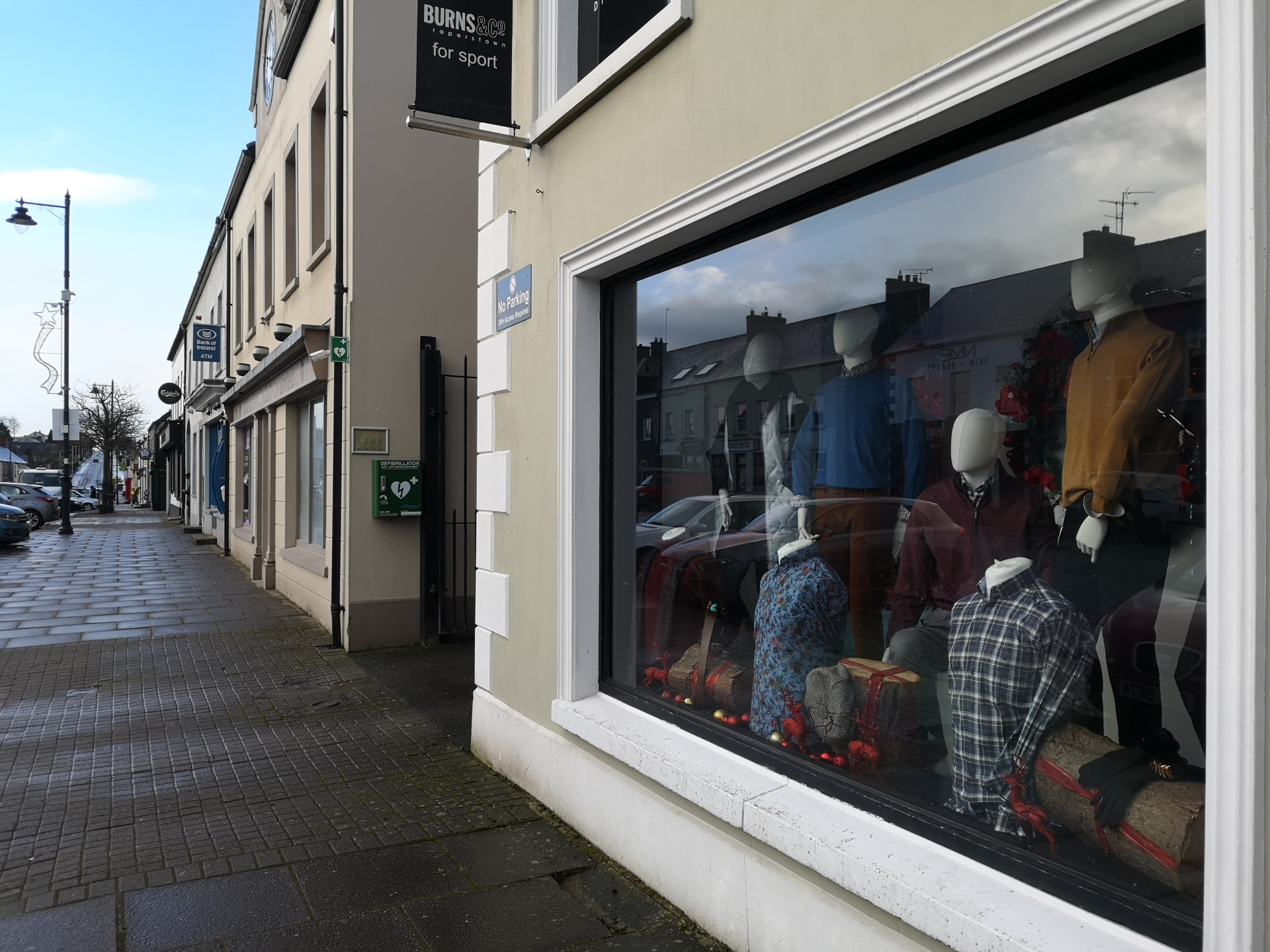 POMPEII WITH BLAZERS: The faceless mannequins give an apocalyptic stare.

It's not that it's quiet – most of the normal sounds are there.

Humming car engines. The church bell. The rhythmic beat of a distant hammer.

The clatter of lorries delivering goods. An occasional horn.

On-street conversations appear muted and hurried. News that 1 in 40 in Mid Ulster may have the virus is in the subconscious.

There are no yelps of recognition from work mates reunited after the Christmas period, no embellished yarns of New Year's Eve revelry.

There is some reassurance in the familiar though.

One man is left disappointed. There are no filled sodas left.

He settles for a bap.

The bacon looks a bit crispy. Tense looks are exchanged.

“I'll not charge you for the bacon,” offers the man behind the counter.

Those waiting in the queue join in the laughter. There it is.

In Draperstown, humanity finds a way.