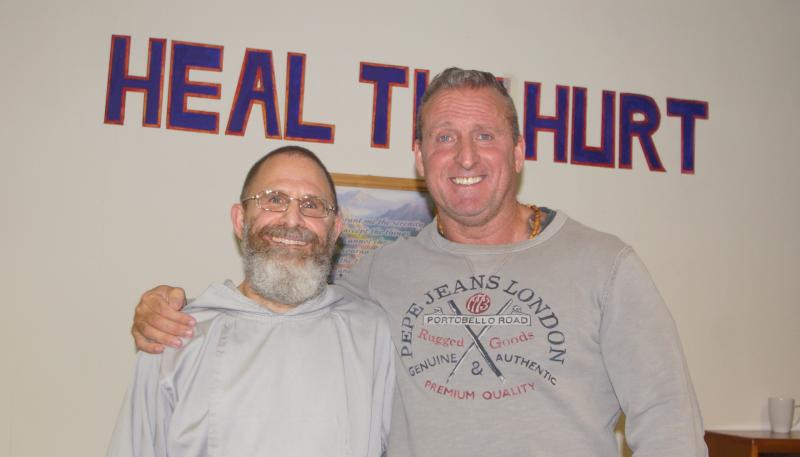 Liam Stewart knows about addiction.  He lost a mother and two brothers to the illness, and the Derry man is also living proof and an example to others that dependence on drink and drugs can be overcome.

For the past 27 years he has been on his own journey to recovery from addiction and is proud to have never relapsed in that time.

Mr Stewart has devoted the last four years to charitable work, helping ‘thousands of people’ along the way after founding Heal the Hurt – Freedom from Addiction.

This week the door closed for the last time at his Northside Shopping Centre office.

As a charity with no funding source Liam could no longer afford to pay the rates.

He fears for the vulnerable people who will be left without support over the next couple of months while he makes efforts to secure an alternative meeting space.

“If I shut down over Christmas I know there will be more deaths, I’m the only place in Northern Ireland where no appointment is needed, there is no other service like this.”

In the last two weeks, he says, two people who were receiving support in his group took their own lives which underlines the need for mental health and addiction services in the city.

After Christmas Heal the Hurt will have a room at the new Padre Pio centre beside the White Chapel in Galliagh but until then Liam is on the lookout for a facility that will allow him to maintain his vital service.

Through his own experiences, he can relate to these people and their pain, he explained: “When they speak to me, it’s not like speaking to a counsellor who has learned it out of a book, they know I know, and they can’t sit and lie to me.”

While running a gym and managing his own recovery Mr Stewart began helping people who would drop-in off the street.

When numbers began to grow, a decision was made to set-up his own charity focused on helping addicts, people who often have underlying mental health issues.

He put his qualification as a psychotherapist to use treating 50-70 people a week with the support of St Columba’s Friary in Galliagh.

Education is the key, he says: “The youngest member of our group told me the other that he only smokes dope.

“Some people say dope is okay, but I say to them, after this group session I’ll take you down to the house of a teenager and all he did was smoke dope and we’ll tell his family that dope is okay…because he committed suicide after being that paranoid he couldn’t speak or leave his bedroom.

“A drug is a drug, it’s mood altering and it’s dangerous.”

People with mental health issues often have addiction problems, he explained, but ‘the level of denial in addiction is frightening’.

Heal the Hurt operates seven days a week but Liam doesn’t get paid for the work.

Group sessions normally run from 1pm-4pm at Northside, one to one meetings and steady online support through Heal the Hurt’s private Facebook page.

Meetings give those attending structure in their daily life and for many it is the first time that they face up to past traumas which they have been ‘masking with drink and drugs.

One member of the group, who has been sober for close to two years thanks to support from Mr Stewart, said others who have just joined are in ‘the depths of despair’.

The person, who did not want to be identified, said: “Liam taught me that I had to face up to all of my demons, instead of running from them, I had to face them in a safe environment.

“I fought with him at first but realised this is what I needed.

“Some people can’t see a life without drink or drugs, it has become the norm in Derry.

“For young people they think they’re going to have no friends if they choose to stop.

“But Liam has taught me and others that you have cut ties with those people and leave that life behind.

“What we say, is that you’re then able to live a happy, joyous and free life.”

While in the grips of addiction as a house drinker this individual ‘didn’t have a life’ and ‘didn’t know what was going on in the world’.

“My children thought I was going to die but I didn’t see the damage I was doing to them.

“I thought I was just doing damage to myself and didn’t realise I was being selfish.

“Now when I think ‘poor me’, I look at how I can help others.

“I want people to be given the same chance that I’ve had.

“We know the problems with suicide in Derry, there is no detox centre but Heal the Hurt is the next best thing, and has supported so many people in the city.”

Last year Heal the Hurt was on the verge of closing for good but a couple of anonymous donors helped to keep it running temporarily.

It is hoped that a solution can be found to retain the service over the next two months and sustain it long-term.

Meanwhile, Liam is spreading his message of hope worldwide and recently appeared on a religious TV channel during a visit to Medjugorje, which is an unofficial place of Catholic pilgrimage.

“I did my testimony on world TV and it allowed me to speak about the work I do and I told them how beautiful Derry is and how the people here are the nicest and most generous you’ll ever meet,” he concluded.